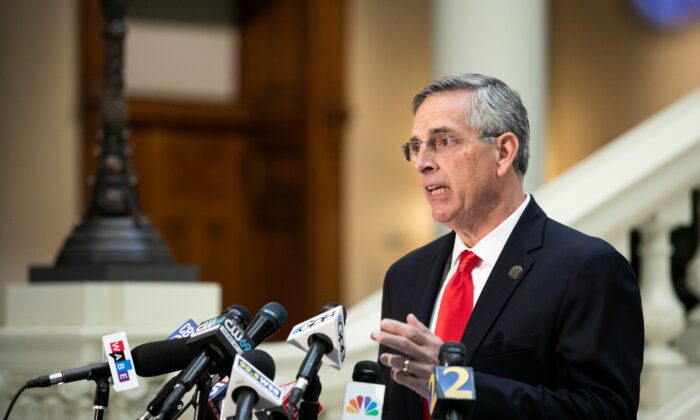 Georgia’s most populous county “cut corners” during the second recount of the Nov. 3 election, the official overseeing the state’s elections said Tuesday.

“Us and our office, and I think the rest of the state, is getting a little tired of always having to wait on Fulton County and always having to put up with their dysfunction,” Brad Raffensperger said during a press conference. “They can still make it by our midnight Wednesday deadline, but they seem to want to make it a dramatic finish.”

Counties in Georgia have a deadline to complete the recount, which started last week after a request from President Donald Trump’s campaign.

Before the recount, workers completed a hand audit on the orders of Raffensperger, a Republican.

“The biggest was, instead of following the procedures that my office and the vendor laid out, Fulton County once again cut corners. The biggest one being he backed up the election project on the server itself instead of on an external backup. Because of that decision, they lost the ability to upload hundreds of thousands of scanned ballots,” he told reporters.

Raffensperger appeared to be referring to the Dominion Voting Systems server that crashed over the weekend. A county official told an Epoch Times reporter at the World Congress Center in Atlanta, where the recount is taking place, that the server is still in the building. The onsite Dominion representative couldn’t resolve the problem, so they had to fly one in. It wasn’t clear if the server was back up and running.

A Fulton County spokeswoman told The Epoch Times in an emailed statement that the server was set up by Dominion and operated in accordance with guidelines from the secretary of state’s office.

“A Dominion representative was onsite during the entire recount process and an additional specialist has been dispatched to resolve the issue,” she added.

The spokeswoman said the county is familiar with Raffensperger’s criticism.

Fulton County Board of Commissioners Chairman Rob Pitts told reporters at the center that he’s “still not clear as to why” officials like Raffensperger “continue to pick on Fulton County, Georgia.”

“We’re the largest county in the state of Georgia, the largest of 159. I cannot speak to what the other 158 counties in Georgia are doing. But I can tell you beyond a shadow of a doubt that within Fulton County, Georgia, there was no hanky panky whatsoever with respect to the recent election, zero,” he said.

“And I challenge anyone from the president of the United States office, his representatives, secretary of state of Georgia’s office to come forward with any proof that they have, that will contradict what I’m saying. What I said before, and I’ll say again, today, as loudly as I can: either put up or shut up.”

Officials with the secretary of state’s office said last month that they were seeing “managerial sloppiness” and “chain of custody” issues in Fulton County, which has over 1 million residents and includes Atlanta. Officials were investigating reports of a pipe bursting while mail-in ballots were being tallied at State Farm Arena.

Fulton County may be fined, depending on what the investigation uncovers.

Spalding County, for instance, failed to follow procedures and then made false claims, he said.