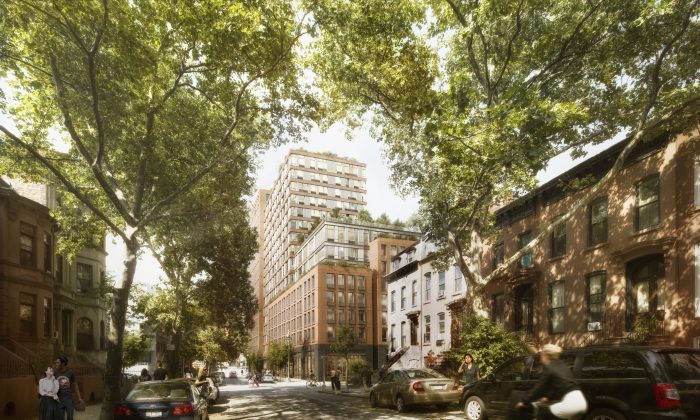 The Atlantic Yards is a $4.9 billion project to build 16 residential towers, a sports arena, and new public transportation infrastructure in the Prospect Heights, Brooklyn, neighborhood.

It was re-branded Pacific Park after the original developer, Forest City Ratner Companies, signed a joint venture agreement in June with the Chinese firm Greenland Group. The project spans 22 acres

Since 2006, when Ratner Companies’ development plan was approved by the state, the project has been mired by lawsuits and vocal community opposition—including a coalition of local organizations called Develop Don’t Destroy Brooklyn.

But the project was essentially given the go-ahead after the U.S. Supreme Court declined to hear a lawsuit challenging the state’s use of eminent domain.

The sports arena, Barclays Center, completed construction in 2012, and the first residential tower, dubbed B2, broke ground the same year.

The AMI in New York City is $83,900 for a family of four, according to estimates by the U.S. Department of Housing and Urban Development. Tenants will be chosen through a city-administered lottery.

The second tower will also have 9,000 square feet of retail space on its ground floor. The building is scheduled to open in fall 2016, according to its developers.

On Monday, Mayor de Blasio said at a press conference for the ground-breaking that 535 Carlton Ave. is an example of his administration’s commitment to keep housing affordable, even in a neighborhood that has seen years of gentrification and people getting priced out of their homes.

“People from this community can live in and continue to be Brooklynites. That to me is a fundamental goal, that people can stay in the city they love, in the boroughs they love, can be a part of their community,” said de Blasio.

In June, the developers, called Greenland Forest City Partners after the joint venture, negotiated with the city and the state to build 2,250 affordable housing units by the year 2025, which was sooner than the original 20-year plan.

The affordable units make up a third of the over 6,400 total units that will be built at the Pacific Park project.

Developers will break ground on another fully affordable residential building at Pacific Park next June, with at least 590 affordable units.

De Blasio’s administration said that it is on track to meet its 10-year affordable housing plan. To date, the city has preserved or built 10,800 affordable housing units and is expected to increase to 16,000 units by the end of the year.