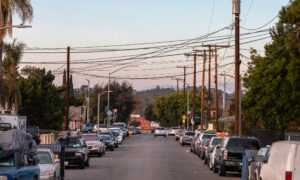 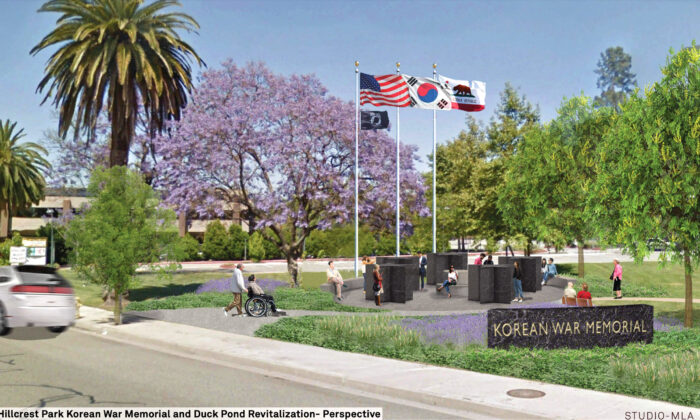 A sceenshot shows a rendering of the proposed Korean War Memorial in Fullerton, Calif. (Courtesy of the city of Fullerton)
Southern California

Fullerton City Council on June 1 will consider authorizing the construction of a Korean War Memorial to commemorate nearly 40,000 U.S. servicemen who lost their lives during the war.

The proposed memorial would be located at Hillcrest Park adjacent to the Duck Pond, near Brea and Harbor boulevards, and would feature five granite stars on pedestals, flag poles, bench seating, and a Korean War educational panel.

The granite stars will have the names of all Americans who sacrificed their lives in the conflict engraved on the sides.

“The granite stars have been manufactured and the names are being engraved,” according to a June 1 Agenda Report.

The memorial will cost an estimated $1.1 million, but the city will not be responsible for any of it. The Orange County Korean War Memorial Committee (OCKWMC), formed by the Consulate General of the Republic of Korea in Los Angeles to honor Americans who served in the war, would oversee the memorial’s construction and maintenance.

OCKWMC has already raised nearly all the funds needed, and continues to raise money to complete construction and for ongoing upkeep, the report states. The committee does not expect the city to provide financial support for the implementation or maintenance of the memorial.

After the council’s approval and once construction commences, OCKWMC will not be able to alter the monument’s design unless city officials grant permission.

The OCKWMC and the city first discussed a possible Korean War memorial in 2014, and considered several locations at the time before postponing the project. Efforts resumed again in 2019.

Construction is projected to begin in July and end in September. A ribbon-cutting ceremony is currently scheduled for Sept. 28.