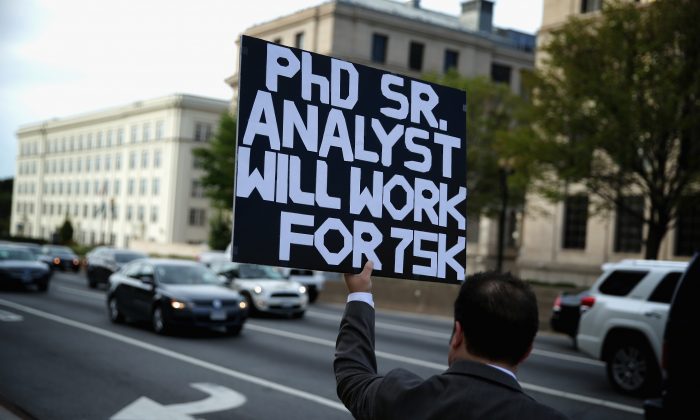 Matthew Giarmo of Alexandria, Va., who lost his contract job with the Department of Health and Human Services in 2012, holds up a sign seeking a job with a lower salary, Oct. 8, in Washington, D.C. (Alex Wong/Getty Images)
Business & Economy

Full-Time Work Scarce in US Recovery

Economists predict there is no quick solution to resolve the country’s dismal job situation. Americans will have to buckle down, with many bearing part-time employment at least until the economy improves.

The percentage of part-time workers wanting full-time work was 9.4 percent in September, up from 8.7 percent a month prior, and from 8.6 percent a year prior. This suggests the decline in the unemployment rate is actually due to more Americans taking part-time jobs rather than gaining the full-time employment they want, according to an Oct. 3 report by research firm Gallup.

Companies are increasingly hiring part-time workers. For example, USA Today stated at the beginning of September that 80 percent out of about 1 million people hired this year were hired for part-time jobs.

The trend has stayed consistent over the years.

However, some labor market analysts believe that the move toward part-time jobs is only temporary. Historical analyses show that when a country’s economy is recovering from a recession, part-time jobs increase significantly and then decline once the economy improves.

Still, there is evidence to the contrary. U.S. business executives increasingly say that they are more likely to hire employees on a part-time basis because of the presumed higher healthcare costs of the Affordable Care Act. Furthermore, with economic growth still slow, corporate executives are reluctant to increase their full-time workforce due to fear of volatile revenues.

The vision to have boring or repetitive jobs done by artificial intelligence began in the last century with Isaac Asimov’s science-fiction short story, “I, Robot.”

“Modern automotive plants, many of which were transformed by industrial robotics in the 1980s, routinely use machines that autonomously weld and paint body parts—tasks that were once handled by humans,” states a 2013 article on the MIT Technology Review website.

For example, we now have software that searches through thousands of documents needed for a lawsuit. This development eliminated the need for entry-level law positions or paralegals.

A company on the forefront of this is Taiwan’s Hon Hai Precision Industry Co. Ltd., aka Foxconn Technology Group. The company announced it would replace over a million jobs performed by humans with robots, according to a recent article on the Energy & Capital website.

Then, there is Kiva Systems. This company builds robots that perform work in warehouses. They can handle up to four times more orders than a human could, according to the MIT Technology Review.

MIT disputes that robots are replacing humans on a large scale. “In sum, the worries of machines overtaking humans are as old as machines themselves. Pitting man against machine only stokes antipathy toward technology and could have a chilling effect on the innovation and adoption of technology essential to grow our economy.”

It’s debatable whether these trends are here to stay, or whether the U.S. job market will realign itself. However, the fact that the U.S. labor market is shifting cannot be denied.

The Bureau of Labor Statistics (BLS) indicates that the U.S. economic engine is unable to hire the more than 11.3 million people currently out of work. In August, companies hired 169,000 staff, but most jobs were in the retail and health sectors. September job gains were not released due to the ongoing government shutdown.

Furthermore, different BLS reports publish different numbers, which is misleading. In August, there were 144.2 million people with jobs. This is 115,000 lower compared to the prior month, according to the BLS Employment Situation Summary Table. That’s incongruent with BLS’s report of 169,000 in new jobs for August.

The employment participation rate, said to be a more realistic indicator of employment, dropped from 63.4 percent in July to 63.2 percent in August, a 0.2 percent decrease. It’s an indication that more people were out of work than in the prior month.

It gets even more confusing, as the latest BLS Job Openings report, dated July, indicates there were 3.7 million job openings at the end of July and 4.4 million people were hired during the month. Doing the math on the above-referenced numbers indicates that 700,000 net jobs were created. However, the Employment Situation Summary said only 169,000 people were hired in August.

Published employment numbers are usually only from the BLS Employment Situation Summary. There is no report that discusses the different reports released by the BLS in detail after comparing the numbers.