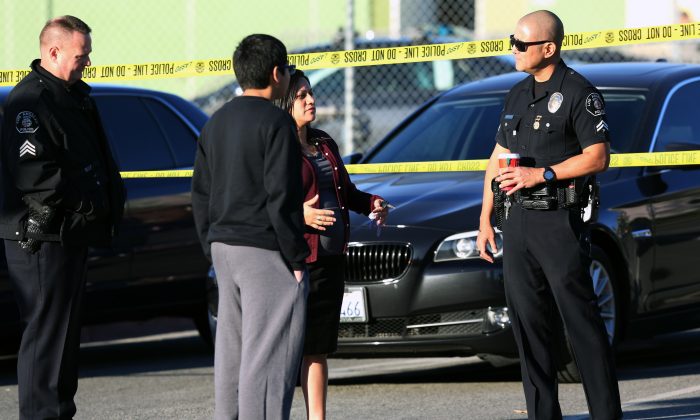 Police officers explain to a parent and her son that his school was closed for the day at Edward Roybal High School in Los Angeles, on Tuesday morning, Dec. 15, 2015. All schools in the vast Los Angeles Unified School District, the nation's second largest, have been ordered closed due to an electronic threat Tuesday. (AP Photo/Richard Vogel)
US

The full contents of the threatening letter sent to the Los Angeles Unified School District has been revealed.

The letter prompted authorities to cancel classes on December 15 and investigate every school for potential danger.

After investigating, authorities said it was safe to open the schools on Wednesday.

TO WHOM IT MAY CONCERN:

Something big is going down. Something very big. It will make national headlines. Perhaps, even international ones. You see, my last 4 years here at one of the district high schools has been absolute hell. Pure, unmitigated, agony. The bullying, the loneliness, the rejection… it is never-ending. And for what? Just because I’m ‘different’?

No. No more., and was once against violence, but I have teamed up with a local jihadist cell as it is the only way I’ll be able to accomplish my massacre the correct way. I would not be able to do it alone. Me, and my 32 comrades, will die tomorrow in the name of Allah. Every school in the L.A. Unified district is being targeted. We have bombs hidden in lockers already at several schools. They are strategically placed and are meant to crumble the foundations of the very buildings that monger so much hate and discrimination. They are pressure cooker bombs, hidden in backpacks around the schools. They are loaded with 20 lbs. of gunpowder, for maximum damage. They will be detonated via Cell Phone. Not only are there bombs, but there are nerve gas agents set to go off at a specific time: during lunch hour. To top it off, my brothers in Allah and I have Kalashnikov rifles, Glock 18 Machine pistols, and multiple handheld grenades. The students at every school in the L.A. Unified district will be massacred, mercilessly. And there is nothing you can do to stop it.

If you do end up trying to, by perhaps, beefing up security, or canceling classes for the day, it won’t matter. Your security will not be able to stop us. We are an army of Allah. If you cancel classes, the bombings will take place regardless, and we will bring our guns to the streets and offices of Los Angeles, San Bernardino, Bakersfield, and San Diego.

I wish you the best luck. It is time to pray to allah, as this may be your last day.


New York City officials received the same letter but opted not to close the schools in the city, saying they believed it was a hoax.

Mayor Bill De Blasio indicated that the wording of the email was so generic and outlandish meant it was not credible.

“Whether it is a prankster or a terrorist, they want to instill fear. They want to disrupt the normal routine,” New York Police Chief Bill Bratton said. “To disrupt the daily schedules of a half million school children, their parents, day care, buses, based on an anonymous email … I think it was a significant overreaction.”

But Los Angeles Mayor Eric Garcetti and L.A. Police Chief Charlie Beck defended their decision to close the schools as a precaution.

“I think it’s irresponsible … to criticize that decision at that point,” Beck said, reported the LA Times. “Southern California has been through a lot in the past few weeks. Should we put our children through the same thing?”

It was the first systemwide closure since the Northridge earthquake in 1994.