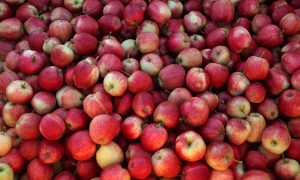 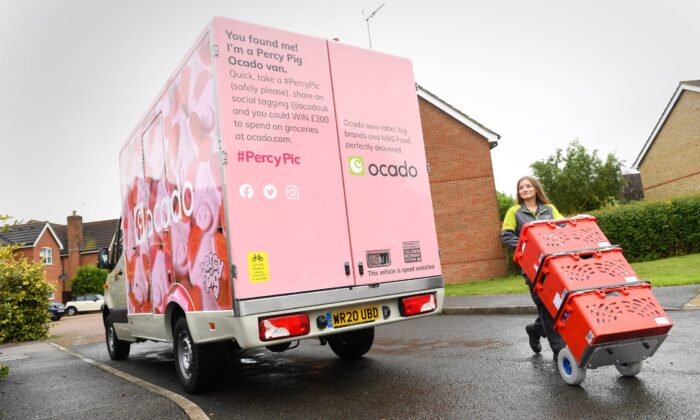 An Ocado delivery worker moves products beside one of the 10 Percy Pig branded Ocado vans, in Britain, on Sept. 1, 2020. (Doug Peters/PA Wire via Ocado)
UK

UK shoppers can now buy the entire range of Marks and Spencer (M&S) food online for the first time, the British retailer said.

M&S on Tuesday officially started its new joint venture with Ocado, a British online store that describes itself as “the world’s largest dedicated online supermarket,” a move that the 136-year-old M&S hopes will help to double the size of its 6-billion-pound food business, and offset problems in its pandemic-hit clothing business.

Ocado on Monday ended its 18-year partnership with Waitrose, another iconic British supermarket.

“The full M&S Food range of 6,000 products, and 800 M&S every day clothing and home lines” are now exclusively available online from Ocado, the two companies said in a joint statement.

This will replace some 4,500 Waitrose products that were on Ocado’s online shelves.

Although the new partnership was planned early last year, Stuart Machin, M&S food managing director, said in a blog that the pandemic has made the decision “more relevant than ever before.”

The pandemic, he said, accelerated “fundamental change in shopping habits and [made] people think about value more than ever.”

Online grocery shopping has doubled its share of the UK market to 14 percent since the start of the CCP virus pandemic, and Ocado reckons it could reach 30 percent over the next few years.

“The M&S launch has been incredibly popular. We have seen a surge in demand for M&S products in the run up to launch which has impacted a very small number of orders today,” said an Ocado spokeswoman.

“The vast majority of customers are unaffected and will be delivered as normal. We would like to thank our customers for giving M&S such a big welcome and sincere apologies to any customers having to wait a bit longer.”

Waitrose started a promotion campaign on Aug. 18 to “bring home Ocado shoppers to Waitrose.com,” and announced on Friday a 12-week trial with Deliveroo to deliver food “in as little as 30 minutes.”