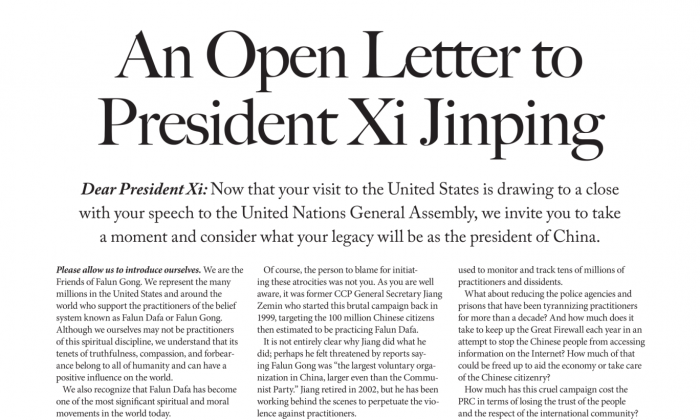 NEW YORK—The Friends of Falun Gong, a non-profit organization in New Jersey, has taken out a full page advertisement in The New York Times calling on Xi Jinping, the head of the Chinese Communist Party, who is currently in the city, to cease the persecution of the Falun Gong spiritual practice in China and begin reforms that will bring about democracy and rule of law in China.

“Dear President Xi,” the letter begins, “Now that your visit to the United States is drawing to a close with your speech to the United Nations General Assembly, we invite you take a moment and consider what your legacy will be as the president of China.”

The letter outlines the background of the persecution against Falun Gong, a spiritual practice that teaches the values of truthfulness, compassion, and tolerance, and includes slow-moving meditative exercises. In 1999, the former leader of the Communist Party, Jiang Zemin, began a campaign to eradicate the practice, involving mass incarceration and torture. Hundreds of thousands have been sentenced to labor camps, and thousands tortured to death, the letter says, citing Freedom House and Falun Gong sources.

The campaign against Falun Gong extended beyond torture, the letter says, referring to the research of two Canadian researchers, one a human rights lawyer, David Matas, the other a former high-ranking diplomatic official, David Kilgour, who delivered a report in 2006 showing evidence that tens of thousands of Falun Gong practitioners had been killed so that their organs could be harvested. They estimated that 41,500 had been killed for their organs from 2000 to 2005—though the number may be more than double that, according to later research.

“One need not be particularly religious or spiritual to agree that any government that engages in such non-consensual organ harvesting against innocent citizens has overstepped all bounds of human decency,” the Friends of Falun Gong letter says. “David Matas once described such actions as ‘a form of evil the world has never seen before.'”

Because this persecution was orchestrated by Xi Jinping’s predecessor, Jiang Zemin, the letter says, Xi should initiate a prosecution of Jiang and begin sweeping reforms to the Chinese system that will genuinely improve the lives of the Chinese people.

Outside the UN, Protesters Call on China’s Xi Jinping to Keep His Word

“President Xi, you have a choice,” the letter says. “You can be known as the president who ended communist tyranny, who brought democracy to China by enforcing an independent judicial system, making real the guarantees of freedom of speech, freedom of the press, and freedom of conscience, and giving the Chinese people the power of self-determination.”

It continues: “Choose this path and the international community will applaud you and seek true friendship with China built on trust and respect. Do this and the Chinese people will bless your memory for generations to come.”

The letter concludes: “Allow Falun Gong to be practiced freely, and there will be hope for China. Bring Jiang Zemin to justice and allow China to take its place as a free nation in the international community. Take these steps and your legacy is assured.”