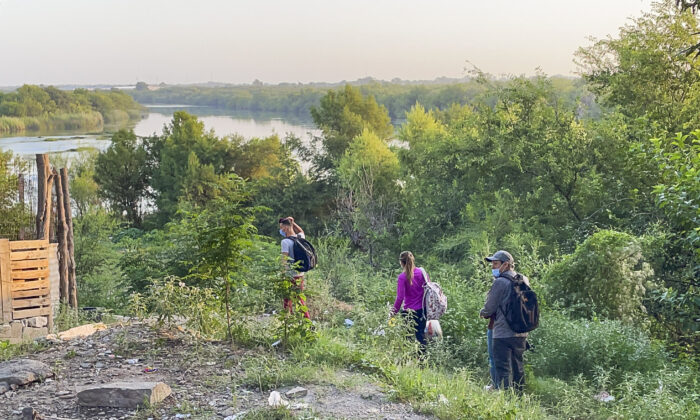 A group of Cubans walks toward the Rio Grande to cross illegally into Del Rio, Texas, from Acuna, Mexico, on July 25, 2021. (Charlotte Cuthbertson/The Epoch Times)
By Zachary Stieber

The number of illegal immigrants apprehended after crossing into the United States from Mexico soared above 200,000 in July, the exact opposite of the usual seasonal trend, according to preliminary numbers from U.S. authorities.

Border Patrol agents encountered 205,029 illegal aliens in July, according to the preliminary figures, which were released by Rep. Chip Roy (R-Texas).

The White House and Customs and Border Protection did not respond to requests for comment.

However, a border official said in a court filing Monday that the number of border encounters appeared to increase in July, with agents encountering an average of 6,779 people a day.

“Overall, according to preliminary data, CBP is likely to have encountered about 210,000 individuals in July,” David Shahoulian, assistant secretary for border and immigration policy for the Department of Homeland Security, wrote in the document, which was obtained by The Epoch Times and lodged in a case dealing with Title 42.

Besides coming in at the highest total encounter number since fiscal year 2000, preliminary data indicate a record number of unaccompanied minors, or illegal immigrant children who arrive without an adult, crossed the border in July, as well as the second-highest number of family units ever.

The latest jump shows “this is now beyond any debate as to whether there is a full blown border crisis,” Todd Bensman, senior national security fellow at the Center for Immigration Studies, told The Epoch Times.

“So now you’re looking at another 15,000-plus, and not counting the getaways. That’s an astounding number that the Biden administration simply has to address with deterrence-based policies,” Bensman said. “They have to do it. They have to do it now. Because the communities down there and the country is being overrun.”

After entering office in January, President Joe Biden immediately reversed or altered key Trump-era border policies, including axing the Remain in Mexico program that forced many asylum seekers to wait in Mexico for their claims to be heard.

Most immigrants seeking asylum are ultimately rejected by courts for insufficient grounds.

Biden or officials in his administration also halted work on the border wall, exempted many aliens from removal, revoked the public charge requirement, reimposed the catch and release policy that was reversed during the Trump administration, and moved to strengthen the Deferred Action for Childhood Arrivals program.

They have kept in place Title 42, a Trump-era policy that lets U.S. authorities immediately expel immigrants without a court hearing due to the COVID-19 pandemic. But the administration also stopped using it to boot unaccompanied minors, drawing criticism from some.

Biden and administration officials have insisted that the immigration system needed fixing and that they’re in the process of making it more humane. They’ve repeatedly blamed former President Donald Trump for the current crisis.

“We certainly have a challenge at the border. We have remarkable people to address that challenge, and a plan in place that we are executing,” Homeland Security Secretary Alejandro Mayorkas said on MSNBC on Monday.

“Let me, if I can, share with you what makes the challenge so acute at this point in time. We are following an administration that, frankly, dismantled our capabilities to address it, and so we are building it from the ground up. We lost four years of investing in the countries from which these individuals are migrating. Our safe and orderly systems were torn down, and so we’re rebuilding them. And our plan is in place and we’re executing it,” he added.

The issue can be addressed by ending paroles for family units, or releasing them without putting them into removal proceedings, Bensman said.

“That’s sucking up everything and causing Border Patrol to leave their posts all along the Texas border, and everybody else is taking advantage of their absence and pouring through,” he said.

“So the first thing that has to happen is, families need to be deported back to Mexico and need to be blocked from entry. They have to restore family removals and removals of unaccompanied minors. And whether that means that they need to help Mexico set up proper facilities or provide aid, medical assistance, and the rest of that on an emergency basis, so be it. That’s what needs to happen. Once the family unit policy is reversed, the rest of it … should fall into place.”