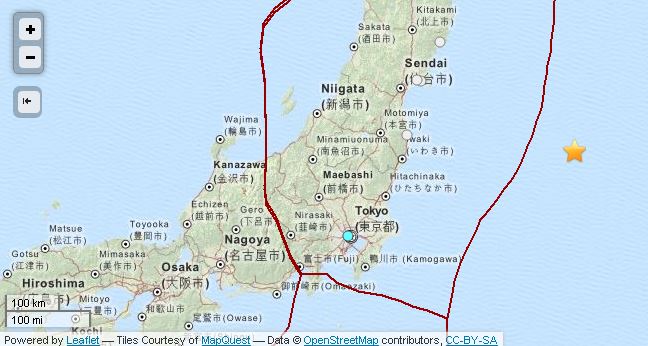 A tsunami warning was issued for Fukushima Prefecture in Japan on Saturday morning after a large earthquake struck. It was later expanded to Iwate, Ibaraki and part of Chiba prefectures.

UPDATE: Reuters reported that a small tsunami around 1 foot high hit parts of the Japanese coast. No damage was reported.

The U.S. Geological Survey said that a 7.3-magnitude earthquake hit off the coast of Japan, prompting a warning from the Japan Meteorological Agency.

The quake had a shallow depth of around 6 miles.

On Twitter, a number of people said they felt the quake, which hit at around 2:11 a.m. local time.

The quake was felt as far away as Tokyo, located some 300 miles away, The Associated Press reported.

According to NHK, people near the coast of Fukushima are advised to move to higher ground as soon as possible.

The Tokyo Electric Power Company (TEPCO) said that there was no damage done to the beleaguered Fukushima Daiichi Nuclear Power Plant in Fukushima Prefecture in Japan after an earthquake struck off the coast on Saturday morning.

NHK said that an evacuation order was put in place for workers at the plant.