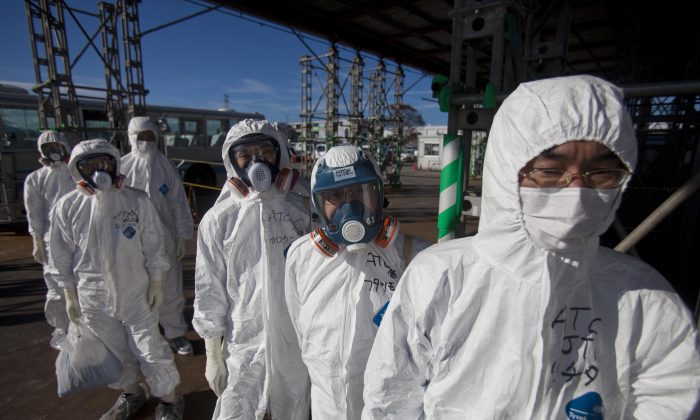 The chief of clean-up at the Fukushima Dai-ichi nuclear plant, which was devastated by a tsunami in 2011, says 600 tons of reactor fuel that melted during the disaster is missing, according to a report by Australia’s “Foreign Correspondent.”

Tokyo Electric Power Company’s chief of decommissioning at Fukushima, Naohiro Masuda, told the Australian Broadcasting Corp. that the company hoped to locate the fuel and start removing it by 2021.

However, Masuda says the technology needed to remove the fuel has yet to be invented.

“Once we can find out the condition of the melted fuel and identify its location, I believe we can develop the necessary tools to retrieve it,” Masuda told ABC.

After the 2011 earthquake which triggered a tsunami that devastated Reactors 1, 2, and 3 in Fukushima, 6,500 workers from across Japan have been working to stabilize and decommission the plant, risking themselves to elevated radiation levels.

The company says the work at Fukushima will take three to four decades and cost tens of billions of dollars.

“In Reactor 1, all of the fuel has melted down from inside the pressure vessel,” Masuda said.

“In reactors 2 and 3, about 30 percent to 50 percent remains in the pressure vessel and the rest has melted down. But unfortunately, we don’t know exactly where [the fuel] is,” he added.

Meanwhile, Gregory Jaczko, who headed the United States Nuclear Regulatory Commission (NRC) during the disaster, said he doubts the fuel can be recovered, adding that an operation like that has not been carried out before.

“Nobody really knows where the fuel is at this point and this fuel is still very radioactive and will be for a long time,” said Jaczko to Foreign Correspondent in Washington.

“It may be possible that we’re never able to remove the fuel. You may just have to wind up leaving it there and somehow entomb it as it is,” he said.

TEPCO revealed how much of the mostly uranium fuel was melted down during the disaster.

“It’s estimated that approximately 200 tonnes of debris lies within each unit,” said Masuda.

“So in total, about 600 tonnes of melted debris fuel and a mixture of concrete and other metals are likely to be there,” he continued.

Those in charge of #Fukishima clean up tell #foreigncorrespondent they still can’t find the melted radioactive fuelhttps://t.co/SZF2DbEguH

The company has tried use custom-built robots to access high-dose radiation parts of the buildings at the Fukushima plant where human beings can’t get to—but it has not worked out.

Jackzo, who is now a particle physicist, questions the security of nuclear power.

“You have to now accept that in all nuclear power plants, wherever they are in the world … that you can have this kind of a very catastrophic accident and you can release a significant amount of radiation and have a decade long clean-up effort on your hands,” he said.

Naoto Kan, Japan’s prime minister at the time of the tsunami, once supported nuclear power, but now says those who argue nuclear power is a safe, cheap source of energy are misguided, according to “Foreign Correspondent.”

“So far, the government is paying $70 billion to support TEPCO,” Kan said.

“But that is not enough. It will probably cost more than $240 billion. I think 40 years [to decommission the plant] is an optimistic view.”

Since the Fukushima disaster, more than 10,000 people have not been able to return to their homes because of elevated radiation levels.

However, some residents have gone back since the decontamination work was finished, which involved removing up to 15 centimeters of topsoil from fields and from around homes.

More than 10 million bags of contaminated soil and waste have been collected so far. The bags are stored in thousands of areas around the plant, some piles measuring several stories high.

“In order for people to come back, we need to show that the Fukushima plant is in a stable condition,” Masuda said.

“We need to make that the situation … we’re working on something [for] which there is no textbook,” he added.