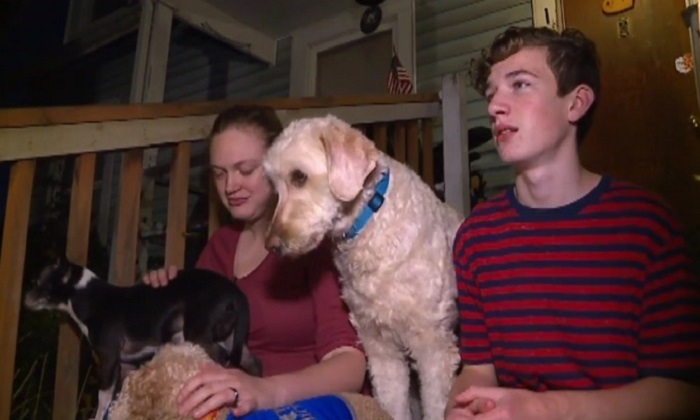 Coriana Kretschmer with her brother Timothy after they scared off an escaped convict who sought to hide in their home. (Screenshot via Q13 FOX)
US

Fugitive Picks Wrong Family House to Try and Hide In

Coriana Kretschmer and her teenage brother were both home when an escaped prisoner burst through the front door of their house in the port city of Takoma, Washington on Nov. 22.

Initially Coriana, 21, thought it was just family members returning home but quickly discovered it was a stranger dressed in a gray prison uniform and wearing broken handcuffs on one hand.

The 33-year-old man had just escaped from a police transport vehicle and was looking for a place to hide and, at that moment, that place was their living room.

But Coriana thought otherwise and her 13 years experience in training dogs helped her handle the situation.

“I immediately started yelling and saying, ‘get out of my house,’ and, in an aggressive manner, just pushing back with my arms out, just saying, get out!” Coriana told Q13 FOX.

But she wasn’t alone in dealing with the intrusion. Her baseball bat armed brother, Timothy came to help, as did two of their three dogs – Sugar, a poodle, and Honey, a labradoodle. Ottis, their Chihuahua, went into hiding.

“Learn to assert your dominance and know that it’s your home and not theirs. So if somebody is there, back ‘em out of your house. Just get ‘em out!” she said.

According to local newspaper The News Tribune, the fugitive at first didn’t budge. Coriana had to push him backwards towards where he had just come. Once she got him outside onto the porch she shut the door and he ran off.

Coriana then called 911 and within five minutes local law enforcement officers arrived on the scene with a police dog who picked up the fugitive’s scent. It wasn’t long until the escaped prisoner was back in police custody.

A man in broken handcuffs & a jail uniform barged into her house. That's when her 4-H training kicked in. @4H https://t.co/yKcCkb5FYa

The young woman told the local paper that she couldn’t stop shaking until later that night when she spoke with her boyfriend, a marine currently serving in South Korea.

“He said, ‘Honey, that could have been so much worse,’” she said.

The boyfriend was impressed by the way she reacted under such circumstances.

“I think it’s what most people would do,” Coriana said. “Somebody told me that now I know that when it comes to fight or flight, I would definitely fight.

“I just know everybody is OK and I made my Marine proud. So I’m happy.”