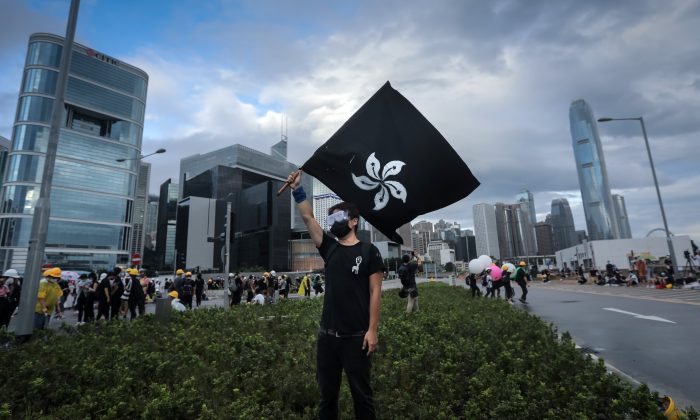 A protester waves a "Black Bauhinia" flag as others set up barricades at Lung Wo road outside the Legislative Council in Hong Kong before the flag raising ceremony to mark the 22nd anniversary of handover to China early on July 1, 2019. (Vivek Prakash/AFP/Getty Images)
Hong Kong

Hong Kong protesters who staged a takeover of the city’s legislature building late on July 1 made global headlines, and were quickly condemned by the city government as “rioters.”

However, the young protesters who rammed through the Legislative Council’s (LegCo) glass doors and vandalized the building’s interior with slogans against the government and a controversial extradition bill are speaking out to explain their actions.

“We stormed the LegCo for only one reason—one that we have maintained from the very beginning to the end—and that is, for the government to respond to the people’s demands,” read a July 2 letter that circulated widely on Hong Kong online forums.

The author identified himself as “a kid who loves Hong Kong and sees it as home,” and participated in the July 1 protest.

“We have tried every peaceful means possible; however, none of them resulted in a response from the government, but only procrastination and police actions using excessive force,” the person wrote, citing previous peaceful marches attended by millions of Hongkongers on June 9 and 16. “We had no other choice, and the government had forced us to fight [for our cause] with more dramatic methods.”

The bill, which would allow mainland China to seek extradition of suspects, drew widespread opposition, with many fearing that the proposal would allow the Chinese regime to punish its critics on trumped-up charges.

Hongkongers have also called on the government to establish an independent inquiry into police use of force to disperse protesters on June 12, which led to more than 80 civilian injuries. But the government has repeatedly said the current police complaints system would be sufficient to investigate any police misconduct.

Writing to his parents, the author of the letter urged them to understand the protesters’ actions. “We heard the news calling us ‘rioters,’ but I want to you know that we are not.”

The young protester went on to explain how those who stormed the building that night only escalated their actions in order to have their message heard.

According to first-hand accounts by protesters and journalists at the scene, signs were posted by protesters warning not to touch important documents and gifts from foreign countries. They cordoned off the library area with barriers and put up notices that read, “Don’t destroy.”

The protesters also left cash after picking up drinks from the refrigerator in the canteen.

Pay the soft drinks; preserve the antiques and put down the fares when they hurry to the last train?
All happened after Hong Kong protesters broke in the Legislative Council on 1st July.
The facts tell us that: Hong Kong protesters are not rioters#antiELAB #FreedomHongKong pic.twitter.com/iaTM5RiJJO

A slogan written on one of the pillars inside the main chamber captured the protesters’ frustration: “It is you who taught me that peaceful demonstrations are of no use.”

#LIVE: "You taught us that peaceful protests are useless" – graffiti inside #legco. Left by #antiELAB protesters. pic.twitter.com/lQHS4JAOSO

The young protester also highlighted the sense of desperation that many feel, including the three Hongkongers who recently fell to their deaths after calling out the government for inaction to scrap the bill.

“While you might have only thought of violence upon seeing the LegCo being broken into and damaged, how could you compare lifeless buildings to human lives that perished?” he wrote.

“Every time we hear the news of a person who perished, our hearts are torn apart. Countless nights we have been overwhelmed by crying, and the people did so out of their love for Hong Kong.”