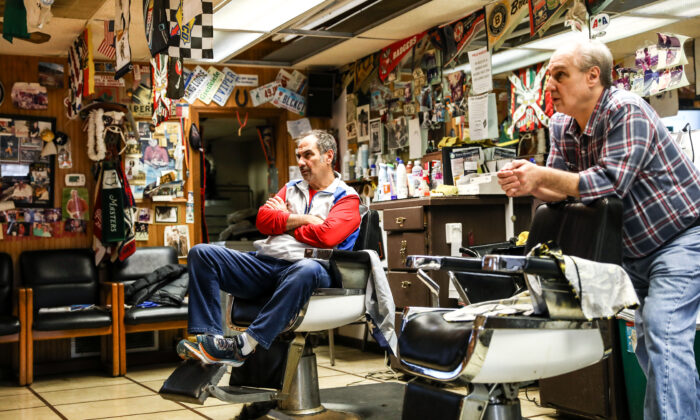 Barbers and brothers Tommy (L) and Jimmy Checkler watch the latest news on the coronavirus in their empty barbershop in the City of Worthington in Columbus, Ohio, on March 17, 2020. (Charlotte Cuthbertson/The Epoch Times)
By Emel Akan

WASHINGTON—The Paycheck Protection Program (PPP) that ran out of money last week will get more than $300 billion in additional funds, giving hope to many mom-and-pop business owners who applied for the loans but came back empty-handed.

The House on April 23 approved a $484 billion CCP virus relief package that includes an additional $310 billion for the PPP loans. The bill that passed Senate earlier will now head to the White House.

Small-business owners who face an unprecedented economic disruption due to the pandemic have flocked to their local banks to apply for the relief fund since the first week of April. The loan program provides an incentive for companies to keep their employees on the payroll.

Small-business owner Lindsey Handley, founder of MetaCoders Inc., says that her revenue “completely disappeared” after schools shut down because of the pandemic. The company provides coding lessons to K-12 students.

Handley, who is from San Diego, is disappointed that she applied for the loan program promptly but didn’t get a response from her bank.

“We applied for the PPP loan as soon as applications opened at Chase. Unfortunately, it was a mess, and still to this day, Chase hasn’t completed the review of our application,” Handley told The Epoch Times.

“We are very concerned that we won’t be able to get funding in the second round,” she said. “We’re also worried that if this continues to drag out, we’ll have to furlough more staff while we wait for government relief. We are currently down to 11 employees from our original 30.”

The PPP loans, with a maturity of two years and an interest rate of 1 percent, are provided to businesses with fewer than 500 workers. The loans can be forgiven if all workers are kept on the payroll for eight weeks. At least 75 percent of the forgiven amount should be used by businesses for payroll.

The Small Business Administration (SBA) announced that it approved more than 1.5 million PPP loans totaling $342 billion before it ran out of money. The agency processed more than 14 years’ worth of loans in less than 14 days, according to a statement by the SBA.

Dustin Floyd and his wife run the 1899 Inn, a small bed-and-breakfast in Deadwood, South Dakota, a rural mountain town. Most of their spring and summer reservations have been canceled because of the outbreak.

“Since the leisure travel market has virtually evaporated, we have very little new income,” he told The Epoch Times.

“It’s incredibly frustrating. It seems like small, independent, family-run places in rural communities are exactly the kind of business the PPP program was designed to help.”

He added, however, the largest and best-connected companies were given a priority.

“Generally, we’re optimistic, but given the rollout so far, we’re a little worried that we might miss out again.”

The program has come under fire due to a loophole in its rules, which allowed hotel and restaurant chains to apply for the PPP loans. Big chains such as Potbelly Sandwich and Ruth’s Chris Steak House were able to get funds for every location they operate as long as they had fewer than 500 employees.

Burger chain Shake Shack announced on April 20 that it returned the $10 million loan after public backlash. Ruth’s Hospitality Group, which owns Ruth’s Chris Steak House, on April 23 said it is repaying the $20 million it received under the program, CNBC reported.

According to Morgan Stanley, nearly 40 publicly trading companies received PPP loans worth at least $243 million. Some of these companies are well-funded, with market valuations in excess of $100 million.

Following criticism from President Donald Trump, Harvard stated April 22 that it would “not to seek or accept the funds allocated to it by statute.” The institution was allocated $8.6 million earlier. Stanford University also stated that it would not need the $7.4 million in relief funds it was due to receive.

“Harvard is going to pay back the money. And they shouldn’t be taking it,” Trump said during a White House press briefing on April 21.

He said he would also request the money back from large companies without naming them.

“The intent of this money was not for big public companies that have access to capital,” Secretary of the Treasury Steven Mnuchin said during the press briefing, adding that the Treasury Department would put out new guidelines “so that people understand what the certification is, what it means if you’re a big company.”

“There are severe consequences for people who don’t attest properly to this certification,” he said.

Large banks such as Chase have also been criticized for favoring larger clients over smaller ones in securing loans.

In response, Chase Bank said that the vast majority of the PPP loans went to the bank’s smaller business clients.

“We have secured more funding so far for small businesses than any other lender,” Anne Pace, Chase Bank spokesperson, wrote in an email.

She said that about half of the bank’s PPP loans have been for less than $100,000 and more than 60 percent of loans provided to companies with less than 25 employees.