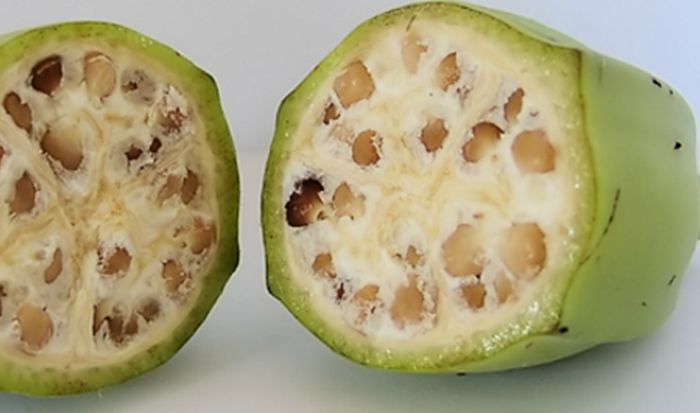 Fruits and Vegetables Looked Very Different Before Humans Domesticated Them

The fruits and vegetables that we know and love didn’t always look, or even taste, that way.

Humans have been messing with with plants’ genetics for thousands of years via selective breeding, which is when farmers select and grow crops with desirable traits over time.

The first bananas were likely cultivated about 7,000 years ago on Melanesia, the group of islands that include Papua New Guinea and Indonesia. They were also grown in Southeast Asia and later, Africa.

The earliest carrots were known to have been cultivated in Persia, and the earliest record of the root vegetable dates to the 10th century. They were thought to be white or purple.

But, over time, they lost their purple color and turned a yellowish color.

A painting from 17th century painter Giovanni Stanchi shows a watermelon that appears a little different from the modern variety.

According to National Geographic, watermelons have been cultivated for 5,000 years. The ancient Egyptians were apparently fond of them.

“The watermelon, delicious as it is, has increased from 50 mm to 660 mm in diameter,” chemist James Kennedy writes. “While ancient ‘wild watermelons’ weighed no more than 80 grams, modern watermelons can range from 2 kg to 8 kg in the supermarket.”

Corn may have been the most affected of all the crops. Chemistry teacher James Kennedy noted that natural corn, which was domesticated in around 7,000 BC, was dry, like a potato.

Corn today is about 1,000 times larger than it was back then, and it’s much easier to grow and peel—while containing much more sugar. European settlers, upon arriving in the Americas in the 15th century, had much to do with its changes.

Peaches have also gone through a significant change over the past 6,000 or so years.

They used to be small fruits that mostly comprised of a seed. They were domesticated in 4,000 BC by the ancient Chinese and tasted kind of “like a lentil,” Kennedy said.

“After the wild peach was domesticated in 4000 B.C., farmers selected seeds from the tastiest fruits for re-planting. They tended to the trees for thousands of years, and the fruits became bigger and juicier with each generation. After 6000 years of artificial selection, the resulting Peach was 16 times larger, 27% juicier and 4% sweeter than its wild cousin, and had massive increases in nutrients essential for human survival as well,” he wrote on his website.