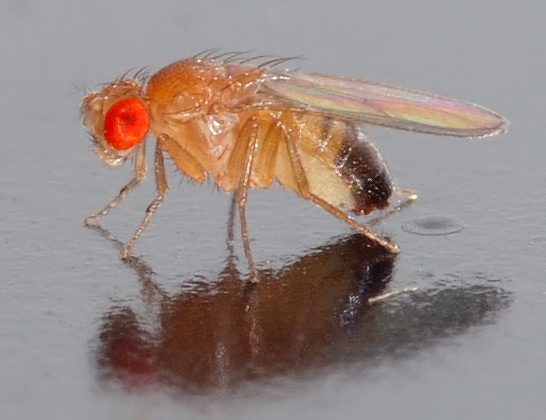 Study finds that fruit flies can medicate themselves with alcohol to avoid death from parasitic wasps. (André Karwath/Wikimedia Commons)
Beyond Science

While humans can use alcohol to disinfect wounds, some insects take things a step further by eating food containing alcohol to get rid of parasites.

Fruit flies are the unwilling hosts of certain endoparasitic wasp species, which lay their eggs inside the fly larvae with an injection of venom that helps suppress the antiwasp immune response and allow the eggs to hatch. When the young wasps emerge, they proceed to eat the flies alive.

However, infected larvae of the fruit fly species Drosophila melanogaster can avoid this unfortunate death by medicating themselves with alcohol.

“We found that environmental alcohol protects fruit flies from being parasitized by wasps, and that, even after being infected, fruit fly consumption of alcohol leads to death of the wasps growing within them,” said research team leader Todd Schlenke at Emory University in a press release.

“Surprisingly, fly larvae actively seek out ethanol-containing food when infected, showing they use alcohol as an antiwasp medicine.”

This alcohol-seeking behavior may even help to prevent wasps from laying their eggs in the fly larvae in the first place.

“D. melanogaster has a special ability to tolerate high levels of alcohol,” Schlenke explained. “It seemed possible that this ability might protect the flies from generalist parasites.”

Even without their antiwasp immune response, some flies are able to survive parasitization simply through ethanol consumption.

“These little fruit flies, the same that hover around the brown bananas in your fruit bowl, are making complex decisions about how much alcohol to consume based on whether or not they have internal parasites,” Schlenke concluded.

The findings will be published in Current Biology in March.