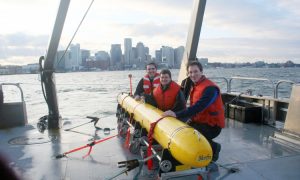 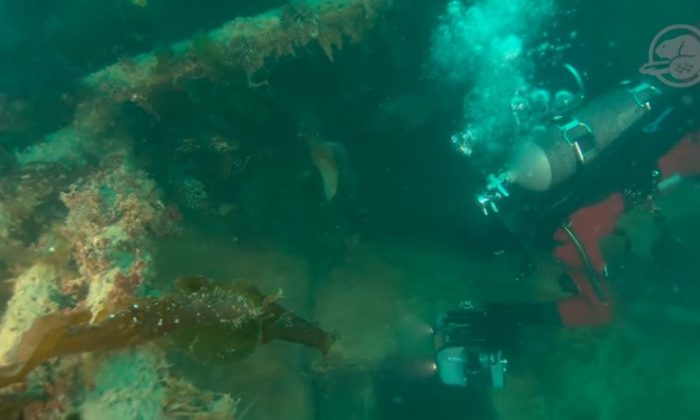 The historic ship HMS Terror—one of two key vessels that sank in the Franklin expedition—has been found in “almost pristine” condition, according to the results of an underwater exploration organized by Parks Canada’s Underwater Archaeology Team.

The shipwreck, which was first discovered in September 2016 at Terror Bay in Nunavut, is a National Historic Site of Canada alongside its counterpart HMS Erebus. Researchers believe the wreckage of the two ships could hold crucial clues to the background behind Sir John Franklin’s lost Arctic voyage.

A team of underwater archaeologists was sent out by Parks Canada aboard the research vessel RV David Thompson on Aug. 7 to conduct a thorough exploration of the shipwreck. Over a period of seven days, the team took part in seven dives and examined 20 of the ship’s many cabins and compartments, successfully capturing photographs and video footage of over 90 percent of the ship’s lower deck.

Parks Canada said in a press release that the team’s research mostly consisted of mapping out the shipwreck using 3D technology, as well as using a remotely operated vehicle to extensively explore the ship’s interior.

It described the effort as “one of the largest, most complex underwater archaeological undertakings in Canadian history.”

Surprisingly, the Terror was found to be in extraordinarily good condition, despite the fact that it lay in its watery grave at the bottom of the Arctic Sea for more than 170 years. Marc-André Bernier, the Manager of Underwater Archaeology at Parks Canada, said the condition of the ill-fated ship greatly surpassed their expectations.

“Not only are the furniture and cabinets in place, drawers are closed and many are buried in silt, encapsulating objects and documents in the best possible conditions for their survival,” he said in Parks Canada’s statement. “Each drawer and other enclosed space will be a treasure trove of unprecedented information on the fate of the Franklin Expedition.”

Artifacts that were discovered and identified inside the ship include plates, glass bottles, bowls, map cabinets, boxes likely to hold scientific instruments, and a complete tripod. Researchers believe that sealed written documents may also be found in good condition within the ship due to its environment rendering it essentially “frozen in time.”

According to Parks Canada’s archaeologists, the near-perfect preservation of the Terror can be owed to its surroundings: the freezing water of Terror Bay actually helped keep the wreckage in pristine shape, and the layers of sediment it was found under acted as a protective, low-oxygen barrier that was ideal for preserving the condition of organic materials such as paper.

Project director Ryan Harris said the shipwreck appeared so well-maintained that it almost seemed to have only recently sunk.

“The impression we witnessed when exploring the HMS Terror is of a ship only recently deserted by its crew, seemingly forgotten by the passage of time–regardless of the fact that it was approximately 170 years ago that the Terror sank unceremoniously to the bottom of the bay where it now rests,” Harris said.

The Terror and Erebus were twin vessels commanded by Captain Sir John Franklin during his doomed Arctic voyage in the 19th century, commonly nicknamed “Franklin’s lost expedition.” The captain and his crew departed from England aboard the ships in 1845 in hopes of finally exploring the elusive Northwest Passage. After several major setbacks, however, the two ships became icebound in Canada near where Nunavut is today, and Franklin and his team of 128 men were lost in the wreckage.

Parks Canada has said that the exploration of the Terror could lead to the potential discovery of “ground-breaking” information, which would help researchers finally uncover the mysterious history of Franklin’s disastrous expedition after nearly two centuries.

Minister Catherine McKenna named the exploration a “game changer” in understanding the fate of the voyage. “Today, the mysteries of the Franklin Expedition are being revealed in new and fascinating ways,” she said in a statement.

“These images from HMS Terror will capture the imagination of all Canadians, including youth and newcomers, and people from around the world. The support, guidance, and knowledge of Inuit have led us to these amazing discoveries and the Government of Canada looks forward to continuing to work in partnership with Inuit in managing the Wrecks of HMS Erebus and HMS Terror National Historic Site.”

BREAKING #Franklin NEWS! 📣 Take an unprecedented look inside the wreck of #HMSTerror – lost at sea over 170 years ago! 🌊 Dive into #history and watch the full #NeverBeforeSeen video here: https://t.co/Zk0akFMS5j #Archaeology @PCArchaeology #FranklinExpedition pic.twitter.com/XToFxeOmvX