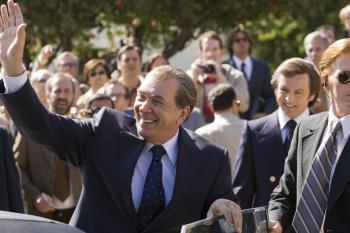 Langella No Longer a Supporting Actor in Breakthrough Role

By Mike McCaw
Print
After the Watergate scandal was exposed and Richard Nixon walked away from the presidency, the United States as a whole demanded conviction. British talk show host David Frost brought that conviction to the people.

Frost/Nixon depicts the process that David Frost underwent in order to bring one of the most stubborn presidents to admit his faults. David Frost, played by British actor Michael Sheen, has a talk show syndicated in Britain and Australia. While the world’s airwaves are becoming filled with news from the White House about the resignation of President Richard M. Nixon (Frank Langella), Frost dreams up the far-fetched idea of winning an exclusive interview.

Determined to make this dream a reality, Frost travels to California to visit the former president, establish a rapport, and hash out contract details. Frost agrees to pay Nixon $600,000 for this once in a lifetime, career-defining interview. Up until this point, Nixon had not spoken to the public in the three years following his fall from grace. Frost now has to come up with this ridiculous amount of money that simply had never before been paid for a news interview.

As a less established talk show host, Frost had his work cut out for him. The film captures his determination and hope of achieving his goal, and for making a name for himself.

Frank Langella offers an extremely compelling depiction of Nixon, expressing his mannerisms distinctively. He portrays Nixon as calm, collected, and a well-mannered individual. He plays into details of the Nixon persona, such as flashing an ever-so-slight grin, with a look on his face of a man who knows that he let the country down.

Exposing a private side of Nixon, Langella does well to express his sly, erroneous comments. When Nixon firsts visit with Frost, Frost brings his friend Caroline Cushing (Rebecca Hall). Nixon asks Caroline where she’s from. Speaking to Frost almost privately, Nixon tells him that he should marry her, the reason being she’s from Monte Carlo where they don’t pay taxes.

Michael Sheen plays a somewhat convincing talk show host. There was no doubt in the filmmakers’ minds that Michael Sheen and Frank Langella would play the parts of David Frost and Richard Nixon.

Ron Howard directed and produced this film. Howard is a director that has the ability to bring out the best in his cast. From the beginning of his career up until now, Howard has directed big budget films such as Far and Away, Apollo 13, and The Da Vinici Code.

Howard does an exceptional job bringing the climate of the mid to late 1970s to the big screen. That warm yellow tint that you see with most 1970s filming and television seems to be present in the film’s palate.

Screenwriter Peter Morgan once again does an excellent job portraying public figures as people, having interesting personal relationships and giving them a sense of humanness. The last public figure he depicted was Idi Amin, the brutal tyrant-ruler of Uganda in The Last King of Scotland. Forest Whitaker won an Oscar for the role and Morgan won a British Academy of Film and Television Arts (BAFTA) award for the best adapted screenplay. As with the gripping depiction of Amin, Morgan’s adaptation of Nixon is truly remarkable. He shows Nixon the man, not Nixon as the former president or image thereof.

Another outstanding contributor of the Frost/Nixon team is composer Hans Zimmer, who has over 100 films accredited to his 30-year career. Music for Nixon flows perfectly. Zimmer provides Nixon with sounds that almost go unnoticed because it flows so cohesively.

With the outstanding team brought together for this film, it’s hard not to put together one of the years best films. Frost/Nixon puts into perspective what it took to make the interview take place.