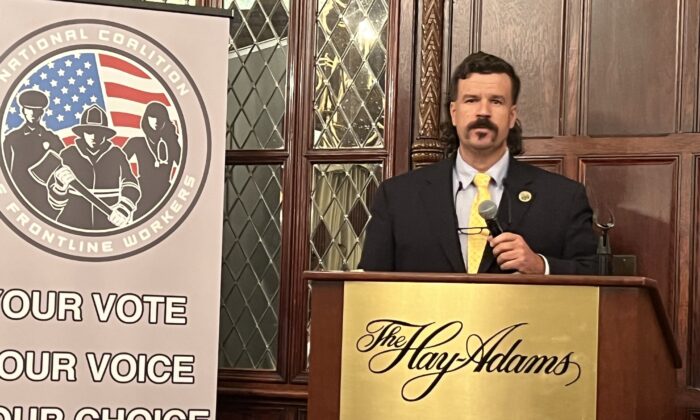 Jason Collins, a Washington firefighter and vice president of administration for National Coalition of Frontline Workers, in Washington on Aug. 25, 2022. (Emily Miller/The Epoch Times)
US News

WASHINGTON—Big cities and hospitals that mandated vaccines for frontline workers during the pandemic have unwittingly become the impetus for a new opposition force. A group of leaders from police and fire departments, EMS, and other related health care professions, created a new coalition to empower frontline workers to fight back against public policies that hurt their livelihoods.

The National Coalition of Frontline Workers (NCFW) launched in Washington, D.C., on Thursday with representatives from the first responders’ professions. Its first official agenda was to call on President Joe Biden to end the COVID-19 public health emergency that has been in effect and been repeatedly extended since January 2020.

“We’re all frontline workers here—we know what an emergency is,” said Jason Collins, the ​​Vice President of Administration for the NCFW and a Washington, D.C., firefighter since 2004. “I’ve never pulled up in front of somebody’s house that is on fire and said ‘I’m going to wait three years to see what happens.’ We dealt with the emergency, and we ended it, and we went back home. That’s what needs to happen today.”

Vaccine mandates by large city governments during the pandemic have resulted in frontline workers getting fired across the country, even as the shots have proven ineffective at stopping the spread of the Omicron variant. There are an estimated 24 million frontline workers in the United States, according to the group.

The launch event of the coalition was held at the Hay Adams Hotel across from the White House. Collins said the group wanted to hold the event at the National Press Club but were told they were not allowed into the building without being vaccinated.

NCFW has a non-profit foundation, as well as a 501 C-5 arm that will enable the coalition to make political contributions and endorsements. The executives of the group made clear that they will support Democrats and Republicans based on their founding principles that every member gets one vote and decisions are made in a democratic way.

A speaker at the event, Dr. Robert Malone, who is one of the original inventors of mRNA vaccine technology platform, told the crowd that he met the frontline workers at the steps of the Lincoln Memorial in January at a rally titled “Defeat the Mandates,” where they came up with the idea and organized the NCFW.

“All of you at one point were embraced as heroes of the United States and then suddenly when you decided you should stand up for medical freedom… suddenly you were vilified,” Malone said. “This cannot happen again. So an organization like yours that brings together these frontline communities is crucial going forward, and I hope will be able to bring a little more sanity to our political process going forward.”

John D. Macari, a trustee of NCFW, was a New York Police Department lieutenant who was forced into early retirement after almost 18 years on the job due to the vaccine mandate. He was denied both a religious and medical exemption.

“The COVID mandates, as well as the constant attack on law enforcement through anti-police and pro-criminal legislation, have highlighted the fact that we do not have a strong unified voice in the political arena,” Macari told The Epoch Times in an interview this week. “These types of legislation were passed without hearing the voice of the men and women on the front lines.”

Mercari, the host of “New York’s Finest: Retired & Unfiltered Podcast,” also said that the New York Police Department “illegally denied myself and thousands of others religious and medical exemptions” for the vaccines, ignoring natural immunity that members received after having contracted COVID-19 “while working in the line of duty prior to vaccines being readily available.”

Matt Connor, a trustee and founding member of NCFW, has been a New York City firefighter for 17 years. He said that he’s been “locked out of the city and the career that I love.” Connor has been on involuntary, unpaid leave for 10 months after applying for both medical and religious exemptions to the vaccine; his applications have not been processed.

“I’m here to speak for every other brother and sister in the fire service and front line workers in New York City. We are hurting. There’s a deep level of pain in what’s been done to us,” said Connor.

Collins refused the District’s 2021 vaccination mandate because of his religious beliefs. He has also said publicly that natural immunity is superior for his own health and the public interest.

“The 24 million frontline workers have been left voiceless and politically alienated. Only 2 percent of them are represented and 75 percent of those are misrepresented,” Collins told The Epoch Times in an interview. “Every member of our organization has a fair and equal vote to reclaim the power of America’s most important workers.”

Also on Thursday, the D.C. police union announced that it won its case against D.C. Mayor Muriel Bowser’s COVID-19 vaccine mandate from August 2021 stipulating that city workers would be fired if not inoculated by Oct. 1, 2021.  According to a union press release, D.C. Superior Court Judge Maurice Ross issued an order ruling that the mayor has to end the mandate and cease and dismiss all disciplinary actions against police union members.

Refusing to bow to pressure from the mayor, Collins and several hundred firefighters hired a law firm to fight back. They have received a partial win because the fire department has so far granted all the religious exemptions. According to Jennifer Donelan, the chief communications officer for D.C. Fire & Emergency Medical Services Department, 135 religious exemptions have been approved, and 75 religious exemptions are currently pending a final decision.

Bowser added a booster mandate in January 2022 that gave city workers three weeks to get the third shot or face termination. The mayor’s booster mandate is still in place six months after the deadline, but is not being enforced. “The priority is to ensure employees have their first and second shots,” Donelan told The Epoch Times.

Rick Sterl, the president of NCFW, said the call to action for Biden to end the public health emergency is their first priority and they have a petition to stop it. “This has been over for a long time and it’s something that needs to come to an end and let everybody go back to work safely and be where they need to be,” said Sterl, an active battalion chief for a Florida east coast fire department.

The new coalition wants to help the frontline workers—nurses, firefighters, and police officers—who have been fired for refusing a vaccine that the Centers for Disease Control and Prevention (CDC) now says doesn’t impact its COVID-19 recommendations. The NCFW leadership says Biden ending the state of emergency will trickle down to change the policies in the states and cities to stop vaccine mandates.

Connor told The Epoch Times: “We want people who were wrongfully terminated or suspended or put on involuntary unpaid leave across the country to be reinstated, fully compensated, and frontline workers of all professions to be made whole again.”