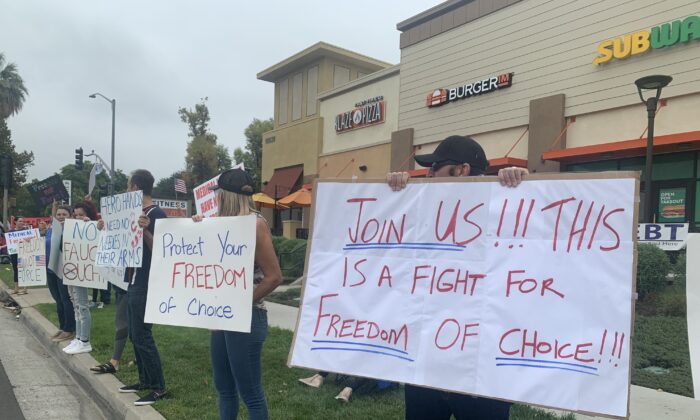 Many protesters told The Epoch Times that their hospitals had given them an ultimatum: they had until Sept. 30 to choose between mandatory vaccination and getting fired.

The California Department of Public Health issued an announcement on Aug. 5 that workers in hospitals, skilled nursing facilities, long-term care homes, and other health care-related fields must be vaccinated by Sept. 30.

Kristina, a registered nurse in California, said her hospital requires staff who are not vaccinated to be tested twice a week. “If we still don’t meet those criteria to have our exemption approved, then up on October 1 we’re going to be placed on 45 days unpaid administrative leave and after that, they said they don’t know what they’re going to do but we can assume what they’re going to do, we’re gonna get fired.”

As a health care worker who has been on the front lines during the outbreak, Kristina believes that mandatory vaccination policies are not for public safety, but are instead politically motivated. For example, people who oppose the mandate and fight for freedom of choice are labeled as “anti-vaccine” and “anti-science.”

“We’re super pro-science. We want people to survive this. We want this pandemic to end more than anybody does,” Kristina said. But as a health care professional, she said she needs to tell people that “it’s not as safe and effective that people are saying.”

She pointed out that the CCP (Chinese Communist Party) virus vaccines are being pushed too fast and did not go through the normal clinical trial stage. “We’re seeing a lot of patients come in with cardiac issues, stroke, pulmonary embolisms and blood clots in general after receiving these vaccines, and they’re varying in ages, from their 20s all the way to 70s and we’re seeing a lot more adverse reactions than the CDC and all those people are reporting on,” she revealed.

Currently, there has been a spate of serious adverse events and deaths due to vaccination. The effectiveness of the vaccines has also been called into question. In July, a cluster of infections occurred in Barnstable County, Massachusetts, where 74 percent of the 469 cases had been vaccinated.

“What is the point of getting the vaccine, if we’re still gonna spread it?” Kristina asked.

“I know that there’s been a couple studies that have come out [about] how the coronavirus spike proteins affect our cardiac cells, which makes a lot of sense, because we’re having increases of myocardial infarctions, mild carditis, pericarditis, all of these heart issues,” she added.

In June, the Centers for Disease Control and Prevention (CDC) said it had received reports of more than 1,200 cases of myocarditis following vaccination. The Vaccine Adverse Event Reporting System (VAERS) indicates that many of these cases occurred after receiving a second dose of mRNA vaccine.

According to a study published on BioRxiv last December by a team of Translational Health researchers from the University of Bristol, the capsid spike protein of the CCP virus by itself can trigger a chain reaction in human cardiac pericytes, leading to heart inflammation and cardiovascular cell damage. These findings suggest that mRNA COVID-19 vaccines, which produce the spike protein when inside the human body, may elicit vascular cell dysfunction.

The Epoch Times has reached out to Southern California Region Kaiser Permanente for comments, as it is one of the many hospitals in California that have issued mandatory vaccination notices.

The hospital replied in an email: “We strongly believe in the science and evidence supporting COVID-19 vaccine safety and efficacy. … All Kaiser Permanente employees and physicians must provide proof of full vaccination by Sept. 30. Those who don’t must submit to weekly testing.”

“We are working with labor leaders on implementation of this vaccination requirement and will also be complying with local, state and federal laws.”

Mickie Fairburn, a pediatric registered nurse who attended the protest rally, said the authorities should not force the vaccine on everybody, “because the vaccine is not for everybody.”

Her primary concern is the safety of the vaccine.

“It’s just an experimental vaccine. They don’t know everything about this vaccine. Some side effects from the vaccine are detrimental and are lifelong … It’s not safe yet [as] it hasn’t even been a full year,” she said.

She also pointed out that the vaccinated could be spreading the Delta variant just as much as the unvaccinated.

In the face of the highly contagious Delta variant, an internal CDC report on July 29 indicated that vaccinated individuals can still transmit the virus.

“We should be able to keep our jobs, and just get tested if needed,” Mickie said.

Nurse Chrissy R. knows a patient who had a stroke after getting vaccinated. She has also seen multiple adverse reactions to the vaccine, many of which are even fatal. “This is America. We should have freedom of choice, [especially] from the medical perspective,” she said.

One of the protesters, Bradley Cole, believes that the government is pushing vaccines step by step on the grounds of “science” and “public safety,” and so far the government has been very successful due to the fear created.

“The only thing I understand is that you have a concept of fear,” he said. “You have the mainstream media that constantly pumping fear into this society and everyone buys it.”

Cole holds that it’s an infringement upon our constitutional rights to live in a free society, a free Republic, “and that’s when you have the entry of dictators and communist regimes that actually come into this country and now start pushing those mandates. If you’re starting to give up your freedoms and it’s starting to erode everywhere else.”

“There’s obviously a bigger agenda here, because it’s always based on fear and control,” he said. “So if you keep pumping fear, you have the greatest control on people because people are afraid.”