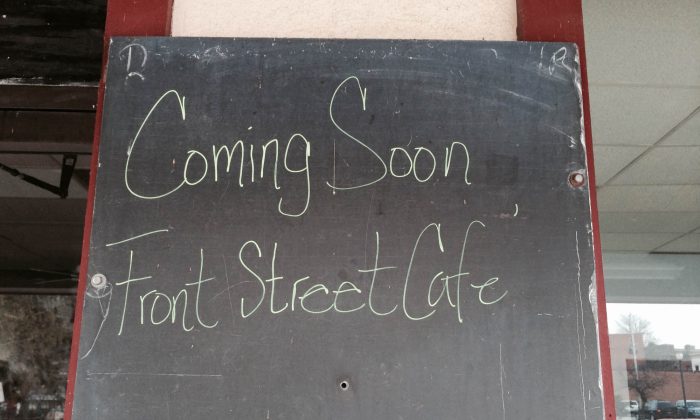 The sign in front of the Front Street Café in the Port Jervis mini-mall on Jan. 8, 2016. (Holly Kellum/Epoch Times)
New York

PORT JERVIS—Mohammed Jahangir is glad to be back in Port Jervis, and judging from the initial reaction, so is Port Jervis.

Jahangir, more commonly known as Yanni, opened World Delight Café in Port Jervis in 2008 and closed it in 2010 when he got a more promising business offer in Westfall, Pennsylvania. He opened Yanni’s World Delight Restaurant in the Westfall Kmart shopping center in 2010, but over time his rent became too high and the high-end clientele that he thought would drive business there didn’t manifest. Now he’s back in the mini-mall on Front Street in the same location he used to be, but now as the manager of the Front Street Cafe (his brother is the owner).

“I had it very good here when I had this one [suite in the mini-mall]—small place, small rent,” Yanni said. “I love this area.”

And judging by the response online, Yanni, a resident of Matamoras, still has many friends in Port Jervis.

Since the new café’s Facebook page started on Jan. 4, 231 people have liked the page and 184 people are talking about it. Of the 6 reviews it has, all are five stars.

For anyone who knows Yanni, this warm welcome should come as no surprise.

“I love people,” said Yanni with the an easy smile. “My goal is friendship … Everyone is my tribe. No one is my enemy.”

Walking in on a Friday afternoon before the café officially opened, this reporter found a man unlocking the café door. When asked if he was the owner, he said he was a friend helping Yanni with the move.

“This is a man I’ve never seen in my life,” Yanni said with a twinkle in his eye. “What he’s doing, I don’t even care.”

“Some kind of good people come in always for me.”

His love of people seems to be a life philosophy as well as good business practice.

He said he’s planning to have a soft opening Jan. 14 or 15, and he thinks his faithful customers will be there when he opens. “With the customers I have around here, I have a really good name,” he said.

As the restaurant manager, Yanni understands good food has to accompany friendly service.

The old café menu had a mix of American, Greek, and Indian food with a sprinkling of other cuisines like Cajun Jambalaya and Mexican Taco Salad.

He said the menu will pretty much stay the same as before—a little of many cultures with an emphasis on Indian, which is close to his Pakistani roots. But whatever he serves, he says quality and healthiness trumps all.

“If you have good things, of course people come,” he said. “If you’re bad, nobody is going to come.”

As for the market, he’s still testing the waters. Initially the café will be open 7-days a week for breakfast, lunch, and dinner and there will be local delivery. Once he knows the market better, that may change, he said.

After losing “everything” from his venture in Westfall and investing upwards of $20,000 into the new location, he is hopeful Port Jervis will be a better investment.

He acknowledged the tough climate for small businesses right now and being in a small city doesn’t help, he said. But with the lower rent and a location where he has exposure already, he is optimistic.

“We’ll see what is going to happen,” he said with a smile.

When it opens, the Front Street Café will be the first of the several new Front Street businesses in the works.

A new brewery and restaurant called Fox N Hare Brewing Co. at 46-48 Front Street is under construction and is hoping to open before the Fall Foliage Festival. Several other previously vacant buildings on Front Street were recently bought and are being renovated. Over on Pike Street, Pike Plaza is getting a facelift with new tenants hopefully in place by spring, CEO of Ellicott Development Company, William Paladino, told Epoch Times last October.

“My assumption would be Yanni’s return shows that he did better here and understands the new growth of our downtown will be beneficial to his business,” Port Jervis Mayor Kelly Decker said in an email. “We welcome him back to his old home.”