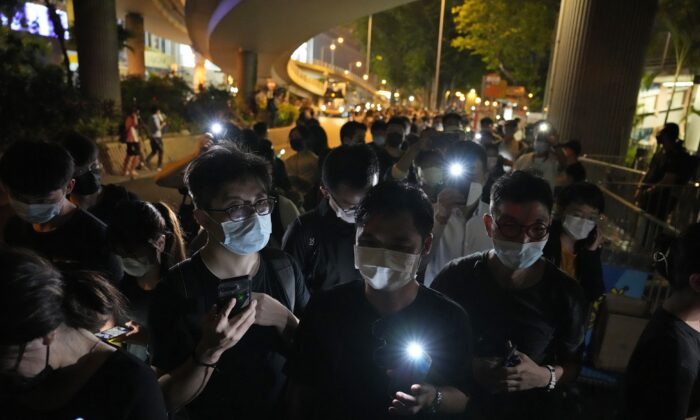 People hold LED candles to mark the anniversary of the military suppression of a pro-democracy student movement in Beijing, outside Victoria Park in Hong Kong, on June 4, 2021. (Kin Cheung/AP Photo)
Thinking About China

From Tiananmen in 1989 to Hong Kong’s Ongoing Political Crackdown

By the time this article is published, we have just a few days left before June 4, the 33rd anniversary of the 1989 Tiananmen Massacre. With the imposition of the National Security Law (NSL) for almost 2 years, the political atmosphere in Hong Kong is tense, almost like at Tiananmen Square in Beijing.

This year in Hong Kong, the Catholic church will no longer be hosting June 4 memorial services, and key organizers of the traditional large scale candlelight vigil at the Victoria Park are all in jail: Lee Cheuk-Yan (former law-maker, politician), Albert Ho Chun-Yan (solicitor and politician, former law-maker) and Chow Hang-Tung (barrister and politician), the former chairs and vice chairs of the now defunct Hong Kong Alliance in Support of Patriotic Democratic Movement of China (支聯會). They have been refused bail, and are waiting to be tried under the NSL.

Would “communist Hong Kong” go so far as to crackdown on private gatherings or scattered crowds holding up iphones in public with light on at 8:00pm, to commemorate what happened at Tiananmen Square 33 years ago?

It will be crazy to see the National Security Department or police start arresting these citizens. Not yet I hope. But we can never be sure.

Cardinal Joseph Zen Ze-kiun, 90 years of age, was recently arrested under the NSL and charged with suspected “collusion with foreign forces”.

For those who didn’t follow too closely, communist Hong Kong has technically banned the Victoria Park June 4 candle light vigil three years in a row.

Hongkongers have been steadfast in organizing annual June 4 candlelight vigils at the Victoria Park since 1989, which always attracted thousands of people, until the regime banned it in 2020, using covid as the excuse.

Those who tried entering the Park on June 4, 2020 had already paid a hefty price, as alluded to earlier ̶ key organizers and supporters of the Hong Kong Alliance in Support of Patriotic Democratic Movements of China (支聯會) are either serving prison terms or are remanded in custody without bail, something no one would have imagined possible, even two years ago.

Jimmy Lai Chee-ying, founder of Apple Daily (pro-democratic newspaper), had been a keen supporter of Hong Kong’s June 4 candlelight vigil. His imprisonment, and freezing of his company’s assets to cripple his media group, had made headlines internationally last year.

Most outspoken voices of Hong Kong are almost either in jail or self-exile.

John Lee Ka-chiu, the man hand-picked by Beijing to be the incoming Chief Executive of Hong Kong on July 1, his last two posts being Chief of Security and Chief Secretary for Hong Kong, is a career policeman.

Lee is among the 11 Hong Kong ̶officials sanctioned by the US Treasury Department in 2020 for “undermining Hong Kong’s autonomy and restricting the freedom of expression or assembly of the citizens of Hong Kong,” Lee, in particular, was “designated for being involved in coercing, arresting, detaining, or imprisoning individuals under the authority of the National Security Law, as well as being involved in its development, adoption, or implementation.”

Hong Kong has, beyond any doubt, turned into a police state.

It is sad to see Hong Kong’s autonomy fading so quickly. And the Tiananmen crackdown from 33 years ago has made another curse: Hong Kong, a city that once supported Tiananmen student protests in 1989, now faces its own crackdown by the CCP.

Being accustomed to express my thoughts with numbers and figures, let me put the picture in investment terms: the CCP has abruptly issued “a put option with a near term expiry date to kill Hong Kong,” and there is no genuine takers of this issuance, buyers or sellers alike.

Whatever the CCP does now, will ultimately choke and destroy Hong Kong. Ironically the CCP is on a different path to achieve just the same result, as depicted in some Hong Kong protestors’ slogan in the 2019 anti-extradition movement: “If we burn, Hong Kong burns with us.” (攬炒香港)

Most of the 47 participants in the 2020 Hong Kong pro-democracy primaries, charged with the alleged crime of “conspiracy to commit subversion,” many of whom are former legislators and district councillors, remain remanded for well over a year now, have been refused bail, and are still waiting for trial dates at Hong Kong’s “kangaroo courts.”

The “confession sessions” are mostly announced through their Facebook accounts, which are managed by the detainees’ confidants. This might not last for too long, as there could be restrictions on social media coming soon in Hong Kong, starting with Telegram.

We start to see a lot of similarities now, between the prisoners of conscience in communist China and those in Hong Kong. The demands of Hong Kong people could no longer be heard, and those who resist the authority would be heavily punished.

Former paramount leader of the CCP, Deng Xiao Ping, was a man of controversy. He engineered China’s economic reforms that attracted foreign investments, but the Tiananmen Massacre made people look at him from a different light. The Tiananmen Massacre of 1989 would remain an indelible stain of modern China.

Deng pledged to allow Hong Kong remain unchanged for 50 years after the territory’s 1997 handover. Twenty five years on, it is now obvious the idea of keeping Hong Kong autonomous from the rest of communist China had hopelessly failed.

The CCP has now “DQed” (disqualified) Hong Kong, as the locals put it.

The so-called “brand new phase” of the “one country two systems” boasted by CCP influencers cannot be further from the truth. Each day grows darker for Hong Kong, and there is no point reminiscing the “glory” of our past.

While things look gloomy, and in the most extreme situation, the CCP might block off Hong Kong, we must all continue to “speak out loud” while we still can, to let the world know about the situation in Hong Kong. Let us also continue to fight for preserving our core values—our own language, our freedom and heritage.

Hongkongers, no matter where you are, especially prisoners of conscience held behind bars, let’s keep our faith in this difficult journey to freedom. The courage needed to keep up the spirit and hope, fighting for a free Hong Kong, is beyond what most people could comprehend. It comes with huge sacrifice. It’s never going to be easy to carry on, but we must have faith, that days are darkest before the dawn. We pray that a free China and a free Hong Kong will eventually come, one day.