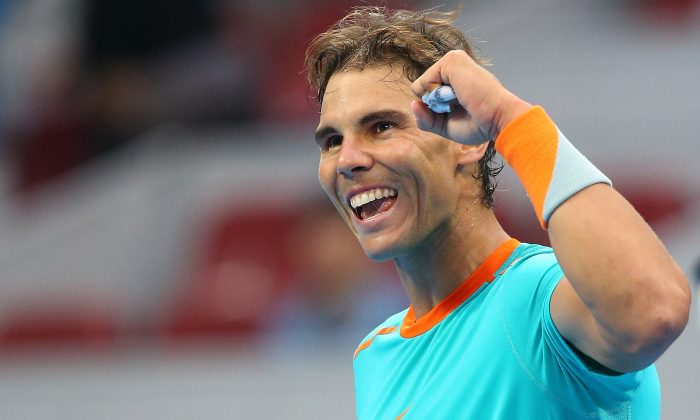 From the Tennis Court to the Dance Floor

BEIJING—How did I end up in Beijing’s historic building, home to Qing Dynasty royalty, warlords and the occupying Japanese army in the 1930s, watching a legendary Russian band, Mumiy Troll, with a bunch of Russian tennis-player fans who lost earlier in the tournament?

Let’s start with the beginning of the long day.

Entering the National Tennis Center in Beijing on the morning of Sept 30, it almost felt like the National Tennis Stadium was in Belgrade and not in Beijing. There were people wearing Serbian Flags, T-shirts and you couldn’t help but notice that this was only there for Novak Djokovic, who has been China Open Tennis Champion for the last four years.

In his first competitive appearance since falling to Kei Nishikori in the Semi-final at the US Open, Novak Djokovic made his China Open debut against Guillermo Garcia-Lopez from Spain. The Serb is unbeaten in Beijing; winning the title on his four previous visits since 2009. What makes his visit to China’s capital so special is the fact that the local fans love him.

Support for Djokovic extends far beyond his home country of Serbia where he was just voted the best athlete in the world. He has a big fan club here, teenagers especially, who are walking around the National Center giving him lots of presents. In fact, from all of the tournaments I’ve seen Djokovic play in, Beijing seems like home territory for ‘Nole’.

“The court itself and the balls, conditions are pretty suitable to my style of the game,” said Djokovic. “But those aren’t the only factors, my fans here in Beijing, are what inspires me to play great tennis here.”

His opponent Garcia-Lopez returned to Beijing for the fourth time, still seeking his first win here and it wasn’t going to happen this year either. Djokovic dominated the court, played lots of angle shots and took the match with 6-2, 6-1. The next in line waiting is Vasek Pospisil from Canada.

Rafael Nadal’s first round victory came after nearly missing 3-months of tournaments. He looked ready and ‘hungry’ for the match. He kept hitting big top spin angle shots, kept aggressive all the way through and stretching his opponent Richard Gasquet from one side to another. After a tough first set fight from Gasquet, came a 6:0 victory for Nadal in the second set. Great start into the tournament by Nadal.

The No.3 seed, Tomas Berdych had a quick match against the Wild Card, Feliciano Lopez from Spain. In just over an hour, Berdych playing aggressive tennis from the baseline left Lopez without a chance to come back and do something different to stay in the match. He served his way to the second round with 6-1, 6-2 where he will be facing Victor Troicki from Serbia, currently No.174.

Maria Sharapova, did her usual fast pace, aggressive game from the baseline with more unforced errors than winners, but it worked for her to take down Elina Svotolina, from Ukraine with 6-2, 6-2. Sharapova made 14 winners with the Forehand, only to make just the same amount of unforced errors with the same stroke. She served one ace and five double faults, but returned really well and was still able to play winners behind her opponent. She will be facing Carla Suarez Navarro who took the 14th seed Flavia Pennetta into a third set and won the match with 6-1,3-6, 6-2.

The two-time Grand Slam semi-finalist of 2014 and Wimbledon finalist of this year, Eugene Bouchard came to Beijing fresh from the Wuhan Open, where she lost to Petra Kvitova in the Final. She faced Sabine Lisicki, the hardest serving lady on tour. Lisicki had a great run of matches in Hong Kong and won the Prudential Open. She had a difficult first round against the Chinese Xu Shilin, but managed to win in three sets. Playing that first round match gave her a little bit of an advantage of feeling the ball and the court in comparison to Bouchard who had a BYE in the first round and didn’t get the chance to get to play a match on these courts yet. Lisicki took the match with 6-2, 6-4.

Venus Williams faced the French Caroline Garcia who was all too familiar, having lost to her in a tough match with 7-6 in the third set, just few days earlier at Wuhan Open. Venus looked more confident and determined to take this home this time around and it worked. She won 6-4, 6-3.

It was a cold but a special day here in Beijing, where an emotional on court ceremony for Li Na was being held. “Yes, this is Li Na’s motherland,” said the poster hanging above the National Tennis Stadium, earlier this evening. It was hard for everyone present not to have tears in their eyes as the fans and players watched videos of Li Na’s years on WTA tour.

The lights were turned off and the crowd became a sea of stars, with fans holding up flashlights on their phones and cameras flashing in the darkness. The on court ceremony included women’s tennis fans, players, WTA Chairman and CEO, Stacey Allester, special guests from the China Open and government officials, honouring Li Na’s storied tennis career and her global impact.

“We have seen tennis grow to new heights in the last 15 years in China and Li Na leaves a lasting legacy which will impact fans world-wide for decades to come,” said Charles Hsiung, co-Tournament Director of China Open.

The day was long; there were lots of matches played and some great tennis. After Li Na’s tribute I went for dinner in the player’s restaurant and met up with my friend who told me that she mentioned to a few of the Russian players who lost earlier in the evening that she was going to go to a gig. And somehow word spread around quickly and before I knew it, I was on the way to a Russian rock concert in the middle of the Beijing downtown area.