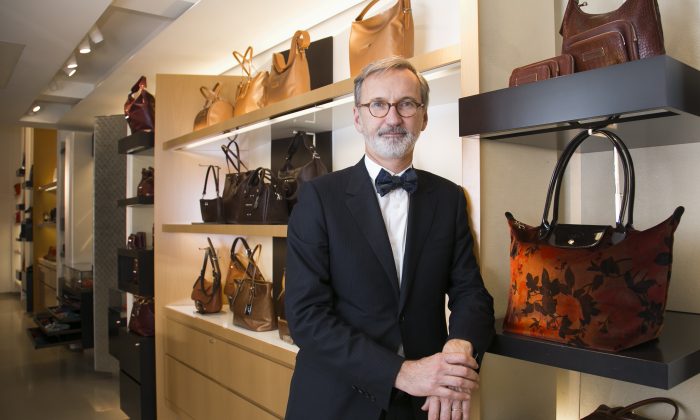 From the Pipe to the Tote: The Story of Longchamp

“So that’s the beginning of the company in 1948,” said Jean Cassegrain, CEO of the French luxury goods company Longchamp, referring to an old horse-leather pipe that he was holding.

He is a man of few words, or rather, a man of few superfluous words and very little time. As CEO of the family-owned and family-run business, he shoulders the weight of the company while jet setting around the world oiling the wheels of the Longchamp empire.

Epoch Times caught up with him on his short visit to New York at the brand’s Madison Avenue store.

Apart from the multicolored iconic tote bags, tucked away on the upper floor of the store, there is a room with a small exhibition of products from the days when smoking tobacco was considered to be a benign habit.

Cassegrain points to a few cigar cases, ashtrays, cigarette dispensers, and old horse-leather covered pipes that were in demand in the late 1940s. Apparently, in the wake of the World War II, American soldiers who were stationed in Paris used to queue specifically in order to buy the company’s leather-covered pipes.

He explains that his grandfather, whose first name is also Jean, started the company as a luxury tobacco store on the Grand Boulevard in 1940. In 1948, Jean Cassegrain created his company, Jean Cassegrain et Compagnie, to broaden the distribution of his leather-covered items for smokers. However, since another company was already using the name Cassegrain, the products were marketed under the Longchamp brand—the name of the racetrack in the Bois de Boulogne, hence the equestrian brand logo.

In 1955, the small family business extended its activity to small leather goods, wallets and pouches for men, then in the 1960s, Longchamp broadened its range of products to include leather and nylon fabric luggage.

Fast forward a few decades and this year Longchamp celebrates the 20th anniversary of its most successful and ubiquitous bag Le Pliage having sold 30 million pieces since its creation.

Look around as you’re waiting for the train in the Manhattan subway and you are bound to stumble upon at least one woman, young or of a certain age, clutching a Le Pliage tote. And despite the fact that it comes in 12 colors, you’re most likely to see either the beige version or the deep purplish color called bilberry trimmed with brown leather.

As with any hugely successful fashion product, what follows its success is the lucrative knock-offs market that shares in the glory, but usually falls way short on quality when compared with the original. In the fashion accessories market imitation is not the easily tolerated form of flattery that it is in other industries.

Europe as well as the U.S. have strict laws against counterfeiting luxury goods. But overseas, say China, it’s the Wild West, or rather, the World Wide Web.

“The issue with counterfeiting is that now they have entered the 21st century and you can buy online. Ten or even five years ago you had these vendors in Manhattan with carts selling counterfeit goods. But that’s over,” said Cassegrain. “But the websites are mostly based in China and they ship directly from China.”

Despite this, Cassegrain does not seem too worried, even as the company does manufacture in China as well. He sees the luxury goods manufacturing world and the world of mass-producing counterfeits as two parallel worlds.

The issue is not likely to disappear any time soon especially since the popularity of the Le Pliage range, in particular, does not seem to be waning.

I asked a friend who is an avid fan what she likes about the bag that is essentially nylon fabric with leather handles and a flap. She said that the outstanding thing about it is that it is so light and durable.

“It can hold my laptop so it’s tough,” she said. She goes on to recount how after a coffee spill she decided to wash her Le Pliage tote and got the leather wet, yet it all came up clean without damage to the leather.

I asked another fashionista colleague if she likes the same bag and her answer was monosyllabic and disenchanted. She is the type of person who does not relish the prospect of being seen with an all too obvious and ubiquitous brand. The merits of its practicality were a moot point for her.

The company also released a not so easily recognizable range of Le Pliage Cuir in 2012. It is an adaptation of the iconic Le Pliage shape made from the leather of an unusual African beast that is “hairy rather than wooly … almost looks like a goat,” according to Cassegrain. The leather has the enviable quality of being supple enough to be able to be folded just like the nylon totes leaving no creases when unfolded, but strong and durable.

The collection comes in less colors than its cousin—eight to be precise—but they are fun and, yes, bilberry is one of the colors as well as beige, which in this year’s range is called “camel.” But you get the picture.

In the spirit of Jean Cassegrain senior and his son Philippe Cassegrain, Jean Cassegrain Jr. seems to be just as ambitious. The company has recently expanded to manufacture ready to wear and a range of footwear, both of which seem very promising in terms of appeal.

While talking about his grandfather and his father building on the success of their first store on the Grand Boulevard, Cassegrain said with an amused look in his eyes “smokers’ accessories being a tiny market, especially now, I think it’s a good thing that they moved on.”