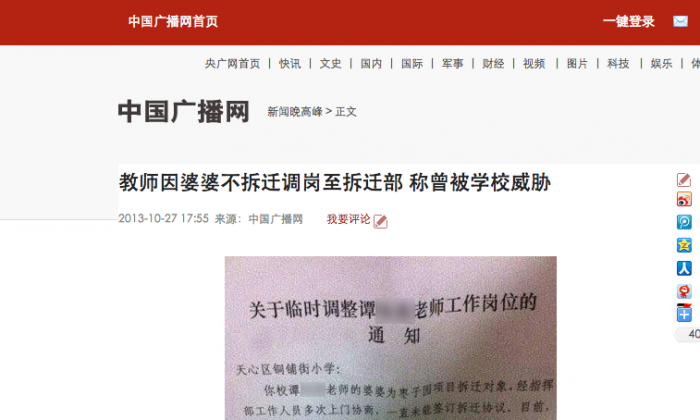 From Teaching Classes to Demolishing Houses

An elementary school teacher in Hunan Province, whose mother-in-law has stubbornly held out against authorities looking to requisition and demolish her property, has been transferred to the local demolition department to aid in their efforts. The stated reason for Tan’s transfer is to have her convince her mother-in-law to give in to the demands.

On Oct. 25, teacher Tan Shuangxi, who works at Tianxin district’s Tongpu elementary school in Changsha city, Hunan Province, received a notice from local education authorities requesting her transfer to the demolition and relocation department. Her mother-in-law owns a residence that has been listed by the government for “renovation and reconstruction.” Disagreements over the demolition process and the proper amount of compensation have resulted in the postponement of the demolition.

The sale of land has become an increasingly important source of local government revenue across China over the last decade, driving the widespread demolition of houses and the sale of the land to real estate developers. Those whose houses are demolished are often paid pennies on the dollar for their property. With their homes demolished, many end up homeless. Some resist through protests or even violence, making land grabs one of the greatest causes of “mass incidents” in China. There were 180,000 of these incidents in 2010, according to Sun Liping, a professor at Tsinghua University.

That evening, Tan posted about her situation on Weibo. Beginning at 8 a.m. on Oct. 26, Tan was repeatedly phoned by school principal Tan Xinyue, who demanded that she remove her remarks from the Internet, since, he said, they had brought disgrace to the Bureau of Education and to the school itself.

Tan Shuangxi was also asked that she give up a hard copy of the transfer notice, on the claim that it was addressed to the school and not herself personally. The two Tans are not related.

In an interview with Chinese media, Tan Shuangxi said the temporary job transfer was a request from the Tianxin District Committee and the Zaoziyuan Demolition and Relocation Headquarters.

When the deputy director of the local propaganda department, Gong Chengping, was interviewed, he said that his work unit had not made any such request — rather, it was Tan herself who asked for the transfer. The Personnel Section of the Bureau of Education, which issued the notice, had supposedly done so without informing higher authorities. The committee subsequently revoked the notice as “inappropriate.”

Tan strongly denied Gong’s assertion that she had asked for the transfer: “This is slander. I can provide the audio recording as proof that he [Gong] repeatedly threatened to have me fired if I didn’t cooperate with the demolition process. Why would I request transfer to a job I have no competence or familiarity with?”

During all this, Tan and her husband also got into a shouting match over the matter, and decided to divorce.

With translation by Frank Fang.