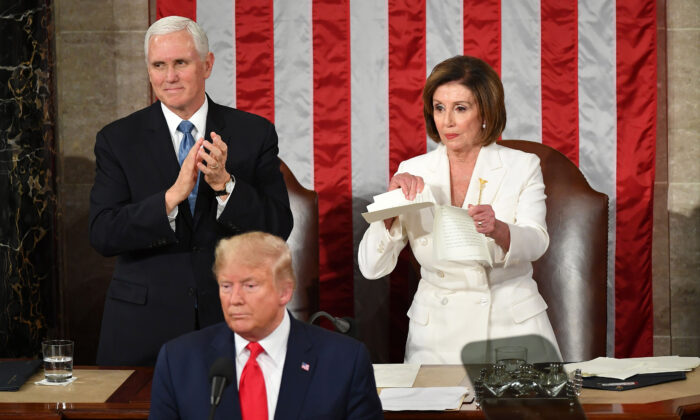 Vice President Mike Pence claps as Speaker of the House of Representatives Nancy Pelosi rips a copy of President Donald Trump's speech after he delivers the State of the Union address at the Capitol in Washington on Feb. 4, 2020. (Mandel Ngan/AFP via Getty Images)
Viewpoints

From Politics to Pathology

They’ve been reduced to a state of existential uncertainty.

They know what they know—Trump is an abomination, a buffoon, a maniac, a tyrant—but reality won’t change accordingly. The president remains in power, stronger than ever. How can this happen in a rational universe?

The world no longer makes sense, they believe, and often one has to agree with them. Sen. Mitt Romney (R-Utah) rises to the podium and casts his vote against the president on the grounds of his religious faith. That puts him on the side of hardline secularists who despise politicians when they base their decisions on religious dogma. It also sets him against the greatest defender of religious liberty in recent times.

And House Speaker Nancy Pelosi (D-Calif.) had to have thought that her dramatic ripping of the State of the Union Address would count as righteous indignation and impress the public. But it came off instead as a pathetic tantrum, as was obvious to anyone who wasn’t deranged by an arduous impeachment process that was collapsing upon itself.

And the news last week that Jussie Smollett was facing federal charges for his fabrications reminded everybody that for many days in early 2019, the nation had to hear his lurid and hysterical account of the wild attack by roving MAGA bigots.

The incident involving the Covington Catholic High School boys was equally fantastical, and the media likewise milked it for every ounce of identity politics melodrama.

Then, we had the anti-Kavanaugh protesters pounding on the doors of the Supreme Court as the newly minted justice took his place. Before that, we had to witness “Handmaid’s Tale” demonstrators lining the balconies during the Senate confirmation hearings.

And recall the 16-year-old Swedish girl, fiery and accusatory, denouncing the leading diplomats and their governments at the U.N. and becoming the world’s moral hero of climate activism.

And just a few weeks back, Sen. Elizabeth Warren (D-Mass.) promised that the secretary of education in her Cabinet would have to be approved by a young trans activist before a President Warren would forward her choice to the Senate.

The thing about this time-is-out-of-joint situation is that the disturbances come entirely from the enemies of the president. The same people who claim that our republic has been twisted and corrupted by Trump have themselves shown symptoms of imbalance.

Republicans in Congress have displayed nothing close to the parade of wackiness coming from “the Squad,” Joe Biden, Sen. Cory Booker (D-N.J.), Rep. Adam Schiff (D-Calif.), and their media backers. Democratic strategist James Carville’s rant against the Democratic Party summed it up this way: “We just had an election in 2018. We did great. We talked about everything we needed to talk about and we won. And now it’s like we’re losing our damn minds.”

Trump has needled and prodded them, mocked and insulted them, but when it comes to decision-making, he has followed a rational course of America First, which he outlined during his campaign. Building the wall is not a crazy notion, nor are tariffs meant to correct bad dealings by foreign countries. Justice Brett Kavanaugh is a mainstream conservative, and the crime reform bill Trump signed didn’t displease minority-group advocates.

When you ask liberals enraged by Trump what he has done to provoke them so much, they leap to things he said, and when you repeat, “But what has he done?” they end up magnifying small acts and policy disagreements into grave threats to our way of life.

When, for instance, Lt. Col. Alexander Vindman was removed from his post in the White House—not fired, mind you, but reassigned, which was the chief executive’s right to do—liberal commentators treated it as a frightening step toward tyranny.

Everything the president does strikes liberals as omens of disaster, but the reaction reflects upon them, not him. That’s the final frustration. Liberals have seen one effort to discredit and unseat him after another fail. Worse, those efforts have made Democrats look bad. Something is wrong in the state of Denmark, they insist, but they can’t make it stick.

What it really comes down to is this: The reality that liberals have constructed after 50 years of the sexual revolution, 40 years of identity politics, 30 years of lax border enforcement, and eight years of professor Barack Obama has turned out to be a political fabrication that no longer appeals to enough Americans to secure the Electoral College and run the government.

Trump was elected in spite of breaking all the rules of political correctness (“All lives matter!”). To liberals, that looks like the end of the world.

It’s the end of the world—their world. What they won’t accept is that a whole lot of their fellow citizens don’t like late-term abortions, same-sex marriage, affirmative action, wars waged for idealistic reasons instead of self-defense, porous borders, people fired from their jobs for expressing biblical beliefs, the substitution of 1619 for 1776 as the birth of our nation, and condescension for anyone without a college degree.

Liberals thought that all those dogmas were secure. They were certain that history was on their side. It turned out they were wrong. Trump and 60+ million people who voted for him were a revolutionary force. Liberals pride themselves on being the party of progress, but they now act more like the party of reaction. They woke up on Nov. 9, 2016, and found themselves the opposite of what they thought they were. They aren’t the vanguard of social justice; they are an ancien regime.

When Lord Cornwallis surrendered to Gen. George Washington at Yorktown in October 1781, legend has it that he had his band play, “The World Turned Upside Down.” Liberals are still in that upside-down condition. They can’t right themselves, and they’re running out of time.

Eight months won’t be enough—maybe not five years, either.