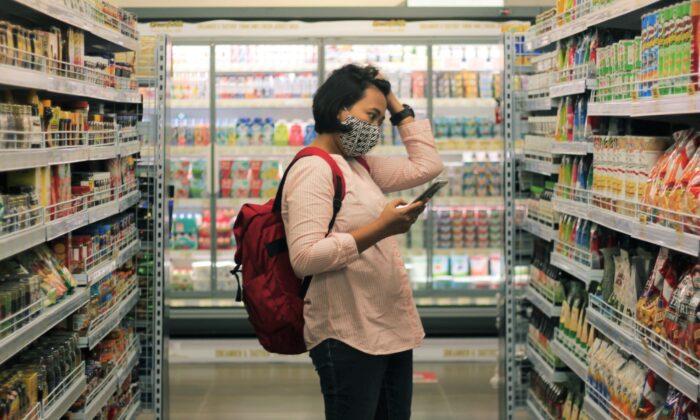 U.S. consumers are feeling the effects of inflation, which is broad based and at a 40-year high, and are now responding to surging prices by saving less, using credit more, and modifying their lifestyle choices, new data show.

According to the Bureau of Economic Analysis, the household savings rate tumbled to 5.1 percent in June, down from 5.4 percent in May. This was the lowest level since August 2009, when it was 4.9 percent.

Federal Reserve officials and market experts have routinely noted that consumers had socked away an estimated $2 trillion during the COVID-19 pandemic. With the economy under lockdown, it was easier for households to save, especially if they remained employed, worked from home, and received thousands of dollars in stimulus checks from the federal government.

Now that the cost of living has become too much for the typical household to handle, putting away money for a rainy day may no longer be the top priority.

Consumer borrowing has recently surged, indicating that consumers are struggling to keep up with inflation.

In June, consumer credit climbed by $40.15 billion, up from $23.79 billion in May. This topped the market estimate of $25 billion and represented the biggest monthly increase since March.

Consumer credit swelled by 10.5 percent year-over-year in June, up from 6.3 percent in the previous month.

The Federal Reserve Bank of New York (FRBNY) recently confirmed that total U.S. household debt rose by $312 billion, or 2 percent, in the second quarter, to an all-time high of $16.2 trillion. This included a $46 billion boost in credit card debt, lifting the total figure to $890 billion.

“The second quarter of 2022 showed robust increases in mortgage, auto loan, and credit card balances, driven in part by rising prices,” Joelle Scally, administrator of FRBNY’s Center for Microeconomic Data, said in a statement. “While household balance sheets overall appear to be in a strong position, we are seeing rising delinquencies among subprime and low-income borrowers with rates approaching pre-pandemic levels.”

It doesn’t appear that consumers will stop relying on credit.

A new LendingTree survey revealed that 43 percent of Americans plan to take on new debt in the next six months. They aren’t going into debt to spend on lavish items, but rather on necessities such as a house or car (30 percent), unexpected emergencies (26 percent), and health care expenses (25 percent).

“The truth is that debt can be either a sign of confidence or struggle, and I suspect we’re seeing the effect of both of those in our data,” said Matt Schulz, chief credit analyst at LendingTree. “Many people take on debt because they feel good about their financial situation and aren’t too worried about paying a little interest if it gets them what they want or need. Plenty of others take on debt because they have to. There’s no question that both situations are happening right now.”

With the U.S. central bank poised to raise interest rates for the rest of the year, borrowing costs will rise at an exponential rate for the next couple of years.

Last month, WalletHub, a personal finance publication, projected that the 100-basis-point rate hike in July would bolster the cost of credit card debt by an additional $6.4 billion in 2022. This estimate didn’t include the other rate hikes that have taken place this year.

WalletHub also conducted a survey in July, the results of which highlighted three trends: Sixty-three percent of people reported feeling affected by the Fed’s tightening efforts; 90 percent were concerned about inflation; and 48 percent weren’t financially prepared for a recession.

Indeed, a recent Gallup poll revealed that inflation is the top concern for Americans today, followed by government and leadership, and the general economy.

As inflation and recession fears become paramount in the U.S. economy, consumers are trying to keep their heads above water. In addition to saving less and using credit more, a record 7.5 million Americans are working two jobs, the latest Bureau of Labor Statistics data show.

Are Consumers Changing Their Habits?

Inflationary pressures are beginning to push consumers to reconsider their spending habits.

A recent survey by Morgan Stanley discovered that two-thirds of U.S. consumers plan to “reduce spending over the next six months as a result of inflation.”

The survey also found that consumers cut back their spending on entertainment and leisure, to 2 percent in July, from 7 percent in June. Researchers noted that visits to shopping malls decreased by 14 percent.

Gasoline demand has eased considerably this summer, according to AAA. Despite national average gas prices falling 19.5 percent since hitting a peak of $5.01 per gallon, motorists haven’t been lured back to the nearby station, says Andrew Gross, a spokesperson for AAA.

A July survey by AAA revealed that drivers had made notable changes to alleviate the pain at the pump. These alterations included driving less, combining errands, and reducing shopping or dining out.

Despite Transportation Secretary Pete Buttigieg suggesting that Americans can minimize the impact of high gas prices by purchasing an electric vehicle, only 2 percent have made the switch.

“Oil is the primary ingredient in gasoline, so less expensive oil is helpful in taming pump prices,” Gross said in a statement. “Couple that with fewer drivers fueling up, and you have a recipe for gas prices to keep easing. It’s possible that the national average will fall below $4 this week.”

According to the Energy Information Administration, gasoline supplies have increased in five of the past seven weeks, totaling approximately 8 million barrels (pdf).

Could sentiment normalize in the coming weeks or months? The FRBNY’s Survey of Consumer Expectations reading dropped to 6.2 percent in July, down from 6.8 percent in June, the lowest level in five months. However, the report also noted that household spending growth dipped for the second consecutive month, to 6.9 percent, and 40 percent expect their household financial situation to be worse off one year from now.