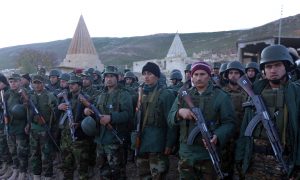 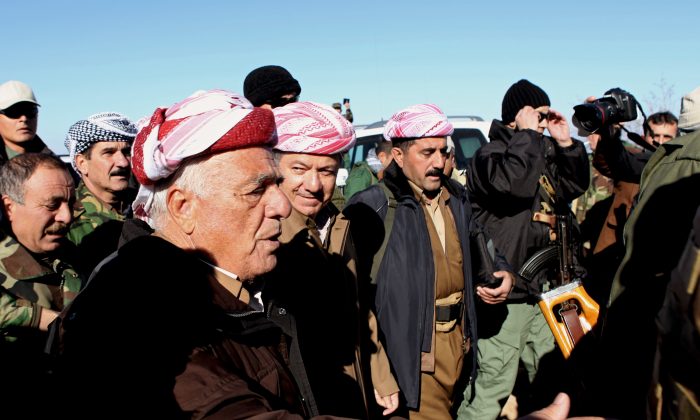 Kurdistan Iraqi regional government President Massoud Barzani (C) arrives to support Kurdish forces as they head to battle Islamic State militants, on the summit of Mount Sinjar, in the town of Sinjar, Iraq, on Dec. 21, 2014. On Sunday, Barazani, visited the command center on the mountain top, vowing to his fighters that they would crush the Islamic State fighters wherever they find them. (AP Photo/Zana Ahmed)
News

From Iraqi Mountaintop, a Fierce Battle to Free ISIS-held Town

MOUNT SINJAR, Iraq—The road to the battlefront plunges straight down the steep face of Mount Sinjar, whipped by a fierce wind. It is littered with trucks and cars that couldn’t get up that incline, abandoned by their owners months ago as they fled the rampage of Islamic State group extremists.

Clothes lie piled on the side of the road, left behind by fleeing families unable to carry them.

Over the past week, Iraqi Kurdish peshmerga fighters have descended the mountain, battling to liberate the town of Sinjar, a tiny desert community in northern Iraq that the gunmen overran in August, massacring and enslaving hundreds of its residents.

An Associated Press correspondent was with the Kurds. This is his report.

The fighting, which is still ongoing, has been fierce. One day this week, a Chevy Tahoe rushed up to a Kurdish position on the edge of town, blaring its horn and flashing its lights. The peshmerga fighters inside piled out with the body of a fellow Kurdish fighter hit by a militant sniper’s bullet.

“We don’t know his name,” said the driver of the vehicle as the dead man’s body was put into a plastic body bag, then draped with a flag of Iraqi Kurdistan.

“They fight like Rambo and have nothing to lose,” the driver said of the Islamic State militants, pointing to a chink in his flak jacket where the same sniper had shot him. “This saved my life.”

He and other peshmerga said they had met heavy resistance from the extremists near a strategic grain silo in the center of Sinjar. There was no opportunity to get the driver’s name, before he and the others rushed back to the front line. The body of the slain Kurdish fighter was driven back up the dizzying road to the summit of Mount Sinjar.

The Islamic State group swept into Sinjar and surrounding villages as part of their summer blitz across northern Iraq. The advance of the extremists struck particular fear here. Much of the population belongs to the minority Yazidi religious community, a tiny sect that the Sunni Muslim radicals consider heretics. Hundreds were killed, and hundreds more Yazidi women and girls were taken captive by the militants, turned into sex slaves or forcibly “married” to Islamic State supporters in Syria and Iraq.

Thousands of other Yazidis fled into Mount Sinjar, a long, steep mountain range that erupts from the flat desert landscape and looms over the town. There they languished for weeks with little food or protection until they were rescued, many by Syrian Kurds who freed a corridor to reach them.

Now, Iraqi Kurdish fighters are on an offensive to push back the Islamic State in this corner of Iraq near the Syrian border.

They have erected a makeshift command center on top of the mountain: a ring of tents set up around a series of cell phone towers. From there they plan their assault on the besieged town below.

On the serpentine road down the mountain face, a Kurdish team was parked on one of the switchbacks as the sun began to set Sunday. Peering through binoculars, one fighter barked into a satellite phone, calling out coordinates for airstrikes.

Drones buzzed overhead as warplanes from the U.S-led international coalition carried out strikes on Islamic State positions in Sinjar. Plumes of black smoke poured up constantly from the town, spewed by tire- and oil-fires set by militants trying to hide their movements from the air campaign.

Kurdish casualties appear to be heavy, though officials could not give firm numbers.

Earlier Sunday, the president of Iraq’s autonomous Kurdish zone, Massoud Barzani, visited the mountaintop command center, vowing to his fighters that they would crush the Islamic State militants wherever they find them.

As he spoke a young fighter from the front lines was rushed into a makeshift clinic with a bullet through his torso. A comrade gripped his hand as an elderly bearded Yazidi man held an IV bottle over his head.

Catching sight of Barzani, the wounded man said to his doctor, “Tell my president, I will die for Kurdistan.”

Soon afterward, he was shipped off on the five-hour drive to the Kurdish city of Duhok.

The assault on Sinjar comes after the Kurds battled their way for days through Islamic State-held territory to reach the mountain. One by one, the peshmerga took back the rural farming hamlets that dot the landscape, most of them once home to several hundred people — now largely driven away when the Islamic State tide swept through last summer.

The villages, now in Kurdish hands, are scarred and vacant. In some, strips of red tape put up by the peshmerga mark houses that have been rigged with explosives by fleeing extremists. Roads are cratered from explosions during fighting.

Many walls are covered with graffiti praising the leader of the Islamic State group, Abu Bakr al-Baghdadi, and the “caliphate” he declared last summer in the broad swath of Syria and Iraq that is under his group’s control.

The Kurdish fighters spoke of foreign fighters among the Islamic State forces they were battling. Many showed off photos on their cell phone of the bodies of slain jihadis with red beards, believed to be Chechens, and of bloody European passports taken off dead militants.

One peshmerga fighter named Mirwan helped liberate his hometown near Zumar, north of Sinjar, fighting off militants who had occupied his family home. He said the battle took two hours. The last Islamic State fighter, when he ran out of bullets, blew himself up with explosives, though the Kurdish fighters were unscathed by the blast.

“All we found was his head and we buried it in the backyard,” said Mirwan, who spoke on condition he be identified only by his first name because he wasn’t authorized to talk to reporters. “I don’t want him to stink up the place.”