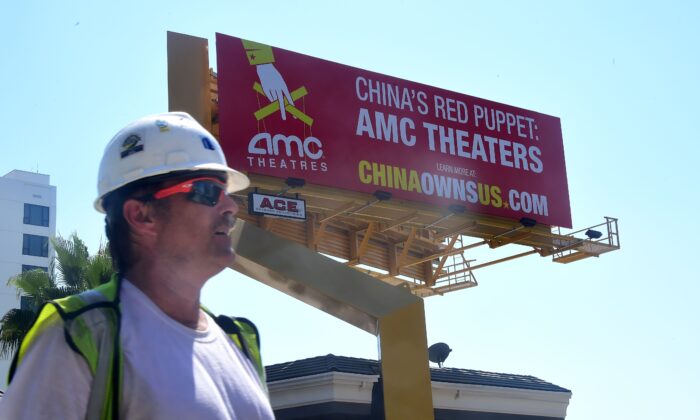 A billboard along Hollywood's famed Sunset Strip from the Center for American Security as part of its "China Owns US" campaign in Hollywood, Calif., on Aug. 29, 2016. The billboard highlights communist China's increasing influence over the U.S. movie industry, specifically AMC Entertainment, described as China's red puppet, following its 2012 sale to Chinese firm Dalian Wanda, closely aligned with the Chinese Communist Party, for $2.6 billion and control of 4,960 screens nationwide. (Frederic J. Brown/AFP via Getty Images)
Thinking About China

From Health Care to Hollywood: How the Chinese Regime Attempts to Control America

We are fast approaching the two-month anniversary of the John Cena apology. For the uninitiated, in an interview for “Fast and Furious 9,” a movie he was starring in, the professional wrestler and actor made the “mistake” of calling Taiwan a country.

Today, American “entertainment platforms” have become so “desperate to access the Chinese market” that they are now willing to “work against their own long-term interests.” Take Netflix, for example, the world’s largest streaming service. According to Kokas, the company “licensed its content to the Chinese platform iQiyi, which in turn bolstered iQiyi’s popularity.” Hollywood has made a Faustian bargain with Beijing. In return for its soul, it agrees to keep churning out tepid, franchise-heavy movies.

Although Cena’s groveling apology was indeed disturbing, it’s important to put it in context. Cena answers to Hollywood executives, and those executives answer to China. The fact that Cena’s apology was delivered in fluent Mandarin speaks volumes. The multi-millionaire didn’t learn the language for fun; he learned it because it’s a job requirement.

More worryingly, the Chinese influence extends well beyond Hollywood. An increasing number of Beijing-backed businesses have invested billions in American land. As the author and farmer Deborah J. Comstock writes, the goal of the Chinese regime is simple: “to invest in agriculture overseas and to gain greater control over oilseed and grain products, to create policies to support facilities, equipment, and inputs for agricultural production, and to create large multinational grain-trading conglomerates.” The revenue earned bypasses “the American commodities markets,” and the products are “flown through the foreign entities’ own distribution channels, directly to the home country.”

The influence doesn’t end there, either. A damning Fox News report outlines the many ways in which the United States has become dependent on China. Take medical supplies, for example. According to the report, China now “produces 97 percent of U.S. antibiotics” and “80 percent of active pharmaceutical ingredients used in American drugs.” In other words, the Chinese Communist Party (CCP) has “absolute control” over “potentially life-saving medicine.”

Furthermore, Beijing-backed “firms and investors own a controlling majority” in close to 2,400 U.S. companies.

The companies owned are as varied as they are numerous. Take Smithfield Foods, for example, the world’s largest producer of pork. In 2013, it was purchased by Shuanghui International Holdings for $5 billion, considerably more than the company’s market value. The acquisition, as well as the price paid, raised eyebrows. The Chinese regime was clearly involved in the purchase. As Sen. Debbie Stabenow (D-Mich.) said at the time, “this isn’t just an acquisition of a company.”

No, she said, the Chinese regime had just bought “25 percent” of America’s “pork industry.”

Both MSNBC and NBC, two of the biggest news providers in the United States, are owned by NBC Universal, which appears to have close ties to Xinhua, a propaganda outlet run by the CCP. Other outlets such as ABC and ESPN also appear to have links to the Chinese regime. In 2019, ESPN staff were directly told to avoid discussing Chinese politics at all costs. The warnings came as protests in Hong Kong started to turn violent.

Two years on, one wonders if the influence from Beijing explains why the virus, which most likely originated in a Chinese lab, has been covered so badly—more specifically, so blindly. Malcolm X once called the media “the most powerful entity on earth.” They “have the power,” he said, “to make the innocent guilty and to make the guilty innocent.” All because “they control the minds of the masses.”

They most certainly do, and that’s because they control the narrative. The narrative isn’t just biased; it is, by and large, incorrect.

Is it any wonder that trust in traditional media is at an all-time low? Or that when the comedian Jon Stewart had the audacity to say that maybe, just maybe, the virus came from a lab in Wuhan—you know, a lab that researches novel coronaviruses—he was either ignored, condescended to, or heavily criticized by left-leaning, China-friendly outlets. Stewart was speaking for the masses, yet he was treated like a conspiracy nut. This is gaslighting in its purest form, whereby the manipulator(s) succeed in getting the target(s) to question their own memory and perceptions, and in some cases, their sanity. With the CCP busy opposing fresh investigations into the origins of the virus, the American media, not just Chinese propaganda outlets, have played an instrumental role in preventing the truth from emerging.

This year, Time magazine ran a piece on why America is so divided today. The inability of so many media outlets to report the news in an objective manner is certainly a contributing factor. What we’re witnessing today is information warfare, which is intimately associated with psychological warfare in its purest form—and the Chinese regime has played a pivotal role in sowing innumerable seeds of doubt.

How did we get here? What can be done? These are important, even existential, questions that must be asked. More importantly, they must be answered.

In a recent interview with Guancha news, yet another Chinese propaganda outlet, China’s vice minister of foreign affairs, Le Yucheng, warned the United States that “the world has changed.” The U.S., he said, “needs to see these changes, adapt to them, and reflect upon and correct its mistakes in the past.” To see what Beijing-approved reflection and correction looks like, feel free to rewatch that John Cena apology.

If the CCP has its way, we’ll all be groveling in Mandarin.