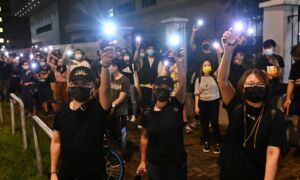 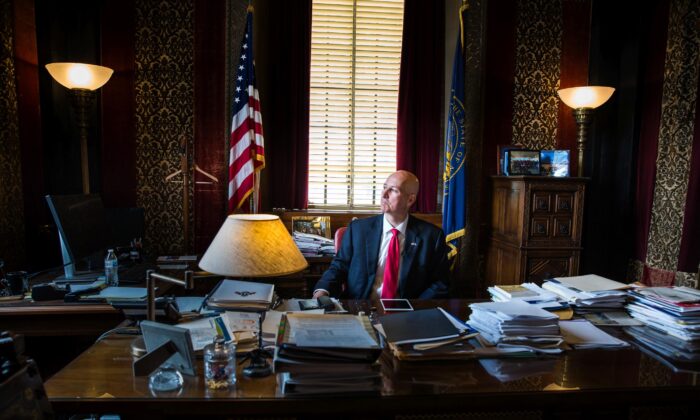 Nebraska Gov. Pete Ricketts in his office in the state's capitol in Lincoln, Neb., on June 24, 2021. (Petr Svab/The Epoch Times)
US News

From Dove to Hawk: Nebraska Governor Explains Lessons From Dealing With CCP

Steering the flagship farming state of Nebraska, Gov. Pete Ricketts has been all about opening doors for the world’s markets to access his state’s plentiful produce. From top-quality beef raised on the lush Great Plains pastures to the premier agri-tech that assists the growing of crops around the world, Nebraska has been exporting billions of dollars worth of products, a lot of it to East Asia.

It made perfect sense to Ricketts to lead a trade mission to China in 2016 in an effort to expand the market further yet.

What happened on the trip, and in the following years, however, gave the Republican a rude awakening.

China started opening up to foreign trade in the 1970s, after the death of Mao Zedong brought an end to the horrors of the Cultural Revolution, which had left the country on the brink of economic collapse. Bit by bit, the communist regime developed a sophisticated regimen of soft-soaping foreign officials and businessmen.

Ricketts was welcomed with open arms and showered with swooning puff pieces in state-run media.

Yet, as he found out, the country’s economic reforms had political deception baked into them. As the former head of the Chinese Communist Party (CCP) Deng Xiaoping put it, the strategy was to “say right, go left.”

Ricketts soon realized the regime was never interested in a good-faith relationship.

“While we were over there, some very disturbing things happened,” he told The Epoch Times in an exclusive interview.

“Members of our delegation were being followed in a very clumsy sort of way,” he said. “It was very clear that we were being monitored.”

One member of the delegation was targeted in particular. One day, when he returned to his hotel room in the evening, he found out his hard drive had been stolen, Ricketts said.

The incident alerted the governor to the levels the CCP would stoop to in order to steal trade secrets.

As President Donald Trump assumed office, followed by a flock of China hawks such as Peter Navarro, America’s policy toward the CCP toughened up.

“President Trump changed his trade policies to really try to get a level playing field for us in China,” Ricketts said.

Trump wanted a trade deal with China that would address a litany of grievances, from currency manipulation to trade barriers and intellectual property theft.

With negotiations progressing slowly, Trump was gradually turning up the heat through wave after wave of import tariffs on Chinese goods. China responded with its own tariffs, but since it imports far less from the United States, its measures had less of an impact.

To escalate its retaliation, the CCP specifically went after industry sectors in which Trump enjoyed strong support—farming and agriculture.

“I think their philosophy was, let’s undermine the president’s authority in the Midwest where a lot of his base is,” Ricketts said.

The move “completely backfired,” he said.

“I mean, farmers and ranchers, while they were not happy to see the demand for their goods go down, are patriotic and totally supported the president’s position about taking a tough stance with the CCP on trade issues.”

That’s what drove the point home for Ricketts.

“That whole thing started to really raise awareness with me about what the CCP was doing with regard to trade,” he said.

Around the same time, Ricketts was becoming increasingly aware of the CCP’s domestic abuses, particularly as information about the atrocities against the Uyghur population in the Xinjiang region started to make its way into the American mainstream.

The CCP’s escalating persecution of the mostly Muslim ethnic minority through the use of internment camps, torture, and brainwashing has garnered considerable media attention and sparked virtually unified outrage in the West. In some regards, it appears to have also helped bring attention to other groups long persecuted by the CCP, including house Christians, Falun Gong adherents, and pro-democracy activists.

Ricketts said he believes relations with China need to be addressed holistically, taking into account not just trade, but also the national security and human rights implications.

But even if one was to focus on business alone, “they weren’t a consistent trade partner in general,” he said.

“It’s always going to be subject to whatever their political agenda is going to be,” he said. “The Chinese market is not an open market. It’s not a free market.”

In the end, he concluded that Nebraska needs to break free from reliance on the Chinese market.

“We knew that we needed to diversify away from those markets the CCP was going to control,” he said.

What followed was a series of decisions to limit CCP influence in Nebraska.

Ricketts moved the state’s trade office from Shanghai to Germany. He urged the University of Nebraska–Lincoln, to get rid of the CCP-controlled Confucius Institute, which it did. He banned the state government from doing business with CCP-related entities. He also banned the Chinese-owned social media app TikTok from government devices.

American companies need to think twice about doing business in China, he suggested, given the CCP law, for example, that any data stored in the country needs to be made available to the regime.

“It’s very concerning to me as an American, that we see so much of Wall Street continuing to invest in China, because, again, they need to know that anything they do there does not belong to them anymore,” he said.

Businesses need to assume a more long-term strategy, he added.

“So many publicly traded companies are driven quarter to quarter by earnings. And so that tends to make them more short-term oriented, rather than seeing the bigger, long-term picture,” he said.

“The Chinese government is very long-term oriented. [CCP leader] Xi Jinping has planned [for the regime] to be the global superpower by 2049, which is a long-range plan. And we here in America have to start thinking more long-range. We need to think bigger picture.”

Nebraska continues to export to China—about a billion dollars worth in 2019, in fact, in large part due to Trump’s “Phase One” trade deal that obliged China to buy American produce. Ricketts, however, isn’t planning on any more trade missions. Instead, he’d like to see more exports to the emerging Southeast Asian countries as well as reliable partners such as Japan and Germany.

“We would have wanted to diversify anyway,” he said. “And I think when the president went through his trade negotiations, that really helped us see all the things where the CCP was taking advantage of us and helped us make that move to try to find other markets.”