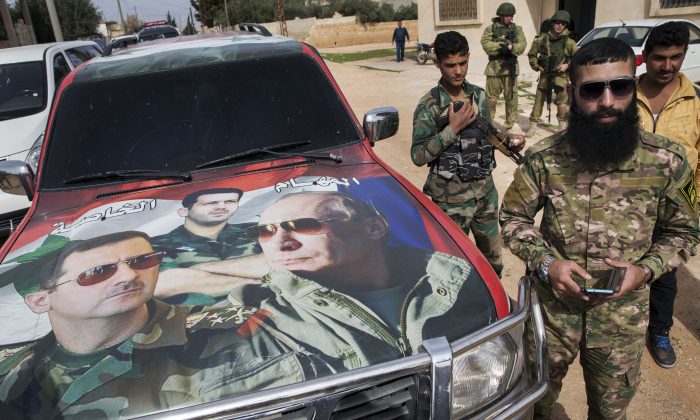 From Calm to Chaos: A Reporter’s Escorted Visit to Syria

LATAKIA, Syria—At first glance, the Mediterranean port of Latakia doesn’t look like a city at war. Its streets are jammed with traffic, stylish women chat under palm trees, and idyllic orange groves stretch for miles.

But the signs become apparent on closer inspection: a man in camouflage shopping with a Kalashnikov slung on his shoulder, the occasional military checkpoint, and rows of unfinished cottages and apartment buildings whose construction was interrupted by Syria’s 5-year-old civil war.

For a group of international reporters on a five-day trip to Syria organized by the Russian Foreign and Defense ministries, the contrasts were stark.

From our military-escorted bus, we rode through a relaxed and sun-splashed Latakia, located in the heart of President Bashar Assad’s Alawite homeland.

We passed burned-out tanks, armored personnel carriers and a shattered bus in areas of recent battles.

And we came under fire in a mountain village, with shells falling around us as we scrambled up a street to an armored truck and safety.

Portraits of Assad and his father, Hafez, looked down from billboards, walls and windows on Latakia’s busy streets, packed shops and cafes serving kebabs and humus.

But the front lines of the civil war that since 2011 has killed a quarter-million people and displaced half of Syria’s population were only about 50 kilometers (about 30 miles) away.

As our group approached those lines, half-finished construction projects gave way to houses damaged by fighting. Many had walls riddled by shrapnel, a missing balcony or a roof blown off. In some places, cardboard replaced missing walls, and clothes hung out to dry across empty sections—signs of life amid the devastation.

Troops at checkpoints appeared increasingly tense as we got closer to the fighting, their look purposeful and fingers on triggers.

Our bus was escorted across central Hama province by a pickup truck with a heavy machine gun mounted on top, with a soldier in a black bandanna scouring the surrounding landscape.

At an intersection outside Hama, we transferred to armored trucks of the Russian military—a clear indication of the danger ahead. Reporters clumsily climbed up the ladders, and we continued under Russian army escort.

We were greeted in the village of Maarzaf, about 15 kilometers (9 miles) west of the city of Hama, by scores of heavily armed men from the private militia of Sheikh Ahmad Mubarak, an influential leader in the province. We saw him sign a deal pledging to respect the cease-fire that began Feb. 27.

Some of his troops were in their early teens, and they looked proud of their weapons and fatigues.

When a Russian truck unloaded humanitarian aid, the sheikh’s troops mixed with the residents reaching for candy, and one half-seriously loaded his rifle to fend off some particularly pushy boys.

But there was more curiosity than danger. A female press officer from the Russian Defense Ministry instantly became the focus of attention, with Syrian men elbowing each other to get a photo taken with her.

A visit to mountain villages near the border with Turkey was more harrowing.

Most of the homes in Ghunaymiyah, recently seized by the Syrian army from militants, were empty shells, their windows and doors missing and walls riddled by shrapnel. Residents who returned to inspect the damage reacted with shock.

A few knelt to pray at a Christian church, its walls half-ruined and the floor covered with rubble and broken glass. The devastation seemed incongruous with the blossoming trees and bright blue sky.

We then went to nearby Kinsibba, which sits on a steep hill overlooking a strategic road leading to Idlib and Aleppo, Syria’s onetime commercial capital that has been the focus of a recent government offensive backed by intense Russian airstrikes.

An indifferent-looking Syrian general said the cease-fire was largely holding despite some shelling by militants of the Nusra Front, al-Qaida’s branch in Syria, which is excluded from the cease-fire. The Russian officers weren’t so calm, and they nervously urged reporters not to stand at the edge of a cliff overlooking the hills controlled by the militants.

Reporters paid little attention, snapping pictures of the idyllic landscape and later moving down a street to chat with residents.

Suddenly, an explosion and a puff of gray smoke rose from the mountain slope about 200 meters (yards) below. At first, I didn’t understand what had happened, but a Russian officer next to me immediately yelled: “All down! We are under fire!”

As I tried to hide behind a nearby low concrete barrier on the street, I saw another puff of smoke from a nearby explosion and reached for my camera. That’s when another blast forced me to get down.

More shells fell, and I realized the next one might land on us.

A Russian APC rushed forward to shield us from shrapnel. Under its cover, we ran up the steep hill and around a corner to where our armored trucks were parked.

I felt I was losing my breath after running in my heavy flak jacket, and others stumbled and fell, with the Russian troops helping them up.

We frantically climbed aboard, the nervous Russian officers shouted our names to make sure all were safe, and the trucks sped away over a bumpy road. We could see little through the small armored windows, and the feeling of danger was intense.

But the trucks soon reached a spot where our bus was waiting for us—a sign the immediate peril had eased. Medics treated those who scraped their arms and legs after falling on the asphalt.

On another day, a Russian military plane flew us to the capital of Damascus, where we saw entire neighborhoods wiped out by fighting, with barely a single apartment building intact. Just a few miles away, however, other neighborhoods bore no sign of damage, with streets filled with traffic and busy shops.

We were taken to al-Tall, on the northern outskirts, where hundreds of people gathered on the streets. Children chanted “Bashar!” Portraits of Assad and army heroes were everywhere. The atmosphere seemed relaxed, but Syrian military snipers patrolled the rooftops.

We went farther north to the Christian hamlet of Maaloula, which has changed hands several times in the war. Set into a mountainside with breathtaking views, the town is overlooked by the Catholic monastery of St. Sergius, locally known as Mar Sarkis and dating back to Byzantine times. A narrow gorge leads to the Greek Orthodox convent of St. Takla, a place of worship since the early days of Christianity.

Some people in Maaloula and other nearby towns still speak a version of Aramaic, the language Jesus is believed to have used.

The sites were badly damaged by jihadi militants. Their walls were blackened by fire and the frescoes damaged by bullets and shrapnel. Ancient icons were stolen.

At Hemeimeem Air Base, the facility used by the Russians in western Syria near Latakia, the military said its warplanes mostly have been grounded since the cease-fire, except for a few missions to the northeastern province of Raqqa, controlled by the Islamic State group. The relative calm contrasted sharply to a previous visit to the base in January, when Russian jets were taking off and landing around the clock.

Since Moscow began its air campaign at the end of September to help its longtime ally Assad, there have been more than 6,000 missions. The bombardment has allowed the Syrian army to reclaim ground in several key areas, most recently around Aleppo.

Our last trip was to Al-Issawiyah, a village 15 kilometers south of the border with Turkey, for a delivery of humanitarian aid. Most of the residents are Turkmen, an ethnic minority that Turkey sees as its kin.

The village has been spared fighting, and unlike other we were taken, there were few portraits of Assad and no chants of support.

The Syrian security agents who accompanied our group seemed nervous and urged us to stay together to avoid being abducted.

Still, residents said the Syrian army was protecting them, and some expressed sympathy for the Russian pilot killed by militants while parachuting from his plane that was shot down by a Turkish jet in November.