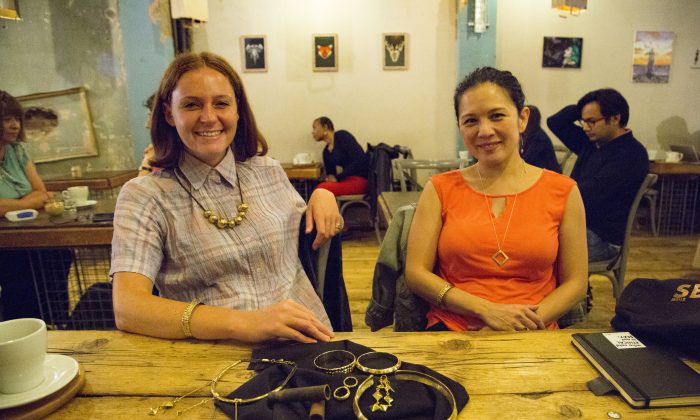 From Bullets to Bling

LONDON, U.K.—This jewellery is solid and strong – strong enough to carry an enduring story. At the same time it’s paradoxical: objects once linked only with devastation and destruction are now shaped into something desirable for a young fashionista in the Western world.

In Cambodia, brass bullet casings and bomb shells are still found on the ground and collected in fishing nets in the sea. An estimated 2 million people died in Cambodia at the hands of the Khmer Rouge between 1975 and 1978. Suffering continued in the years to come; decades on, Cambodia is still recovering.

Chantha Thoeun’s father was killed by a Khmer Rouge soldier when he was 8 years old. His mother had died when he was 4, so the death of his father made him an orphan. He was brought up by his grandparents, and, with the help of an NGO, he started learning how to make jewellery when he was 14 years old.

It was the start of his journey as an artisan. With the remnants of bullets and bombs readily available, Chantha, now 36, trains other artisans to create upcycled jewellery from these relics of war. His wife is also an artisan, and through their work they provide for their two young children.

His small team started working with Taeko Ohyama in 2013. Taeko, co-founder of InHeels, is a city woman who makes conscious decisions.

InHeels’ concept was born when Taeko’s friend Yuka Okada was stuck in London during the eruption of an Icelandic volcano in 2011. She needed a place to stay, so she called Taeko, who welcomed Yuka to stay at her flat in Islington.

The Japanese friends had first met in a salsa bar in Tokyo. Both passionate about ethics, fashion, and partying, their unplanned meeting in London sparked an idea to start a contemporary ethical fashion brand.

Taeko was working in hedge funding for an investment bank in London, a city that she loves to call home. She quit her job and the friends combined their resources to launch the brand.

Their target market? “A city woman who is educated, understands the world, wants to make the conscious and right decisions, but still having a drink and going to the nightclub, that’s all fine you know, why not?” said Taeko.

“I used to be like that,” she said, referring to the clubbing. “Not so much now,” she said smiling, looking over at her one-month-old baby son, her second child, sleeping soundly in the pram next to her.

Taeko and Yuka now champion ethics independently on separate sides of the globe. Yuka, 31, is based in Tokyo, while Taeko, 40, is settled in London, bringing up her children and balancing her business in between.

The business is small-scale, which means she knows exactly where and how the money is being spent.

Taeko has visited a fair-trade factory in Nepal several times; there they produce on-trend garments for InHeels. Earlier this year she visited Chantha Thoeun’s small jewellery workshop in Cambodia to see how they produce the jewellery.

After collection, the bullet casings and bomb shells are melted down and poured into moulds by Chantha and his team. The designs, some very intricate, are all hand-crafted. Jewellery designer Lucy Georgeson worked with Taeko on the collection.

“What you wear is an identity as well; what you wear is who you are, and what you represent – your values,” said 29-year-old Lucy, who now works for a fair-trade gold company.

She resonates strongly with the bold tagline on InHeels’ fair-trade canvas bags: “Who said ethical is not sexy?”

Lucy found out about the lack of transparency and dark side of the jewellery industry at university, hearing harrowing stories of the abuse and child labour in diamond mines, blood diamonds, and dirty gold. As a designer, she didn’t want to have any part in designing jewellery that didn’t have an ethical inclination. Then she found Taeko.

But for the average consumer, there may not be much awareness of where the gold, silver, or gem in their ring or necklace actually comes from. Consumers often go for the easy option, as they make quick decisions as part of their busy lifestyle, says Lucy. They often want something well designed first and foremost, and then think of ethics second.

For Taeko, she was interested in international poverty from a young age. She recalled: “When I was 9 years old, I didn’t think of business. My aunt gave me a book for Christmas, and it was a book about Ethiopian famine. I thought, is this happening on the other side of the world? This is crazy.”

4 Ethical Entrepreneurs Who Focus Their Businesses on Helping Others

Feeling the Magic Behind Sustainable Fashion

“I wanted to travel to the other side of the world, I wanted to know,” she said. And she did. Her products now raise awareness of ethics in the fashion industry.

The brass bullet jewellery is designed with current trends and movements in mind, appealing to the trendy urbanite market. The brass that started with a story of suffering ends with beauty and flair.

“It’s taking something bad and making it good,” said Lucy.