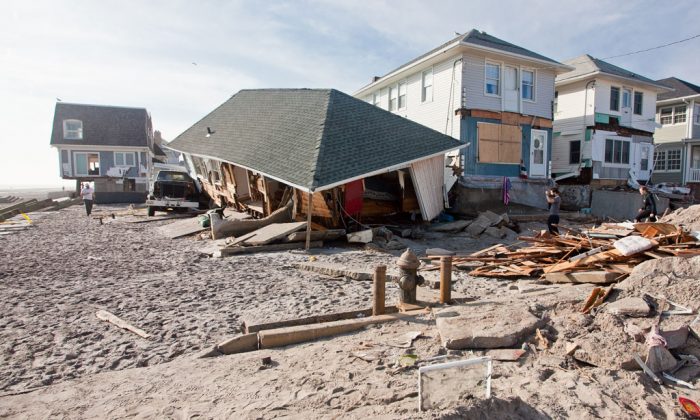 A House that is barely standing just a week after Hurricane Sandy ripped through the area in the Rockaways, New York, on Nov. 11, 2012. To this day, many people are still waiting for their houses to be re-built from the storm. (Samira Bouaou/Epoch Times)
News

From Anger to Evidence

NEW YORK—Thousands of Superstorm Sandy survivors continue to languish in a never-ending labyrinth of paperwork, bureaucracy, and confusion. Most are homeowners, who have emerged as the single most vulnerable group of Sandy survivors.

The proof is in the numbers: of 20,000 registered applicants to the city’s Build it Back housing recovery program, only a handful have gotten help. In technical terms, by the program’s own reckoning, it works out to less than 1 percent of applicants.

For the rest, getting desperately needed help for repairs, rebuilding, and reimbursement is not a question of when, but of if ever.

“Build it Back is an organization engrossed in unrelenting incompetence,” said one man during a town hall meeting last week in Far Rockaway about his experience as an applicant. His sentiments were echoed by more than four dozen other community members who testified.

Enter the city’s comptroller, Scott Stringer, who led the meeting and listened to every word.

Stringer, who took office in January, was host, moderator, judge, and jury for the 250 angry, frustrated residents gathered at the Mount Carmel Baptist Church for the third in a series of six meetings.

In April, Stringer’s office announced the launch of its so-called Sandy Recovery Unit and an audit of Build it Back. The office-wide effort draws on resources from every department, from accounting to budgets. It also leads staff to get involved with individual cases to help move them forward. Staff is dedicated to the work by borough, and at any given time about 15 people are assisting constituents.

Though state and city-level comptroller meetings are not exactly revolutionary (it’s been done everywhere from Texas to New Jersey), Stringer’s approach goes beyond just rooting out fraud and incompetence.

“This is not a meeting about excuses and apologies,” he told the crowd.

Though it’s difficult to measure the results in one month, Stringer has publicly put himself and his staff’s reputations on the line.

“Give her your information and someone from my office will call you tomorrow,” he said to one resident this past Tuesday who complained that Build it Back inspectors came to her storm-damaged home but refused to look at the sinkhole in the basement. “If you don’t get a call, they won’t have a job,” Stringer said.

For much of the meeting, Build it Back’s new director, Amy Peterson, sat silently next to Stringer’s deputies at a long table facing the audience. Chief among the complaints attendees dished out in their allotted two-minute slots referenced the enormous amount of paperwork they have had to supply.

“Build it Back wants everything but my firstborn child,” said one area resident, who added that paperwork is constantly getting lost. “It’s basically a wild goose chase. We all deserve answers.”

By the Office of the New York City Comptroller’s own reckoning, the mountains of paperwork are no myth. Stringer said his office has calculated that the city’s Sandy recovery effort has generated a staggering 100 million pieces of paper. Build it Back’s former director, Kathryn Mallon, openly admitted during her tenure that on more than one occasion staff lost paperwork.

All of this, when the program cost a staggering $6 million just to conceptualize and get up and running, according to data obtained by the Epoch Times.

To many applicants, the hope of getting real help seems slimmer by the day. According to city data from May 6, across all boroughs 20 homes have begun construction and two have completed construction. As of May 22, a total of 156 reimbursement checks have gone out.

For Stringer, regardless of the reasons for the delays, enough is enough.

Either Stringer is an incredibly good actor or he has homed in on the core problem that most Build it Back applicants rail over: incompetence.

“So far, Build it Back has spent almost as much on consultants as it has on repairing homes,” he said to a wave of applause and shouts in agreement.

Stringer and his staff, who have already visited Breezy Point and Coney Island, will hold three more meetings in Manhattan, Staten Island, and Red Hook in coming weeks. Each meeting gives him and his army of 150 auditors more ammunition for their audit.

“What I heard was shocking and outrageous,” said Stringer by phone the day after the Rockaway meeting. “In every community I go to I’m hearing about paperwork being lost, calls not being returned. It’s just mind-boggling to me.”

His goal is to hear directly from residents, and then use it for his office’s audit.

“The Sandy Audit Unit has been able to glean a lot from those sessions,” he said, adding that at every hearing he is being told of “gross negligence and incompetence of the people involved.”

“I want to match the stories that we heard to the audit that we’re doing,” he said. “These are real stories from people who have now been victimized by the bureaucracy.”

Though he wouldn’t speak to specific details of the ongoing audit, he did say a report with recommendations will be issued sometime this year.

He also said the stories he’s heard so far are “remarkably consistent.”

“They’re not getting answers, they’re getting wrong information, people fill out mounds of paperwork that immediately gets lost,” he said.

Stringer concedes that helping individuals with their cases is a bit unusual for a comptroller, but it seems to be exactly what Build it Back applicants need: someone with the power to take their plights personally.

So far, it doesn’t seem to be a tall order for the lifetime New Yorker who grew up in Washington Heights.

“We’re breaking a lot of ground,” said Stringer. “We do these hearings and you leave angry and upset for these people.”