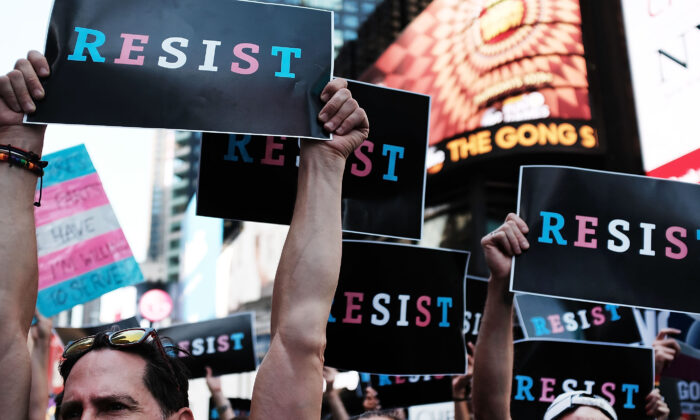 From American Shame to Civic Breakdown

I walked into a drug store in Manhattan in a nice area not far from the Empire State Building the other day in search of a razor, but there was a problem. The shelf of razors was locked up. A plastic window covered the display, which included the cheap disposable models, not just the fancy brands. As I bent over and peeked through it, I heard a voice to my left.

“Sir, if you need anything, let me know and I’ll open it up,” a CVS worker said.

I wandered further through the store and noticed that nearly half the goods were under lock and key. Even the ice cream in the freezer was sealed. Another CVS fellow stood at the entrance, scrutinizing the people coming inside.

Later that day, I took the subway back to my rooms on East 19th Street, catching the No. 6 in Grand Central at rush hour. People piled into the car, every seat was taken, and I squeezed into the center and stood silently with everyone else.

It wasn’t quiet, though. As the train rolled south, the pounding rhythms of rap music filled the air. Or maybe it was hip-hop or some other raucous pop genre.

It wouldn’t have mattered to me if it weren’t for the expletives scattered in every other verse line. I couldn’t see where the music was coming from. It could have been from the far end of the car, but everyone had to listen to it, children and elderly women included. Someone had a stereo on his lap, pumping up the volume, and the rest of us didn’t think for a second of asking him to turn it off.

A few nights before, around dinnertime, some yelling broke out in the street. My studio apartment is on the second floor, right above the sidewalk. I went to the window and spotted a black woman below, 40 or 50 years old, in dingy clothes. She had stopped walking and was now facing backward toward Second Avenue, with a bag in one hand and gesturing with the other.

“You are some dumb-[expletive] white woman!” she yelled.

I followed her glance and saw another woman, white and also middle-aged, on the landing of a townhouse two doors away. The white woman said something back (I couldn’t make it out), the black woman responded, then the white woman … It went on for 45 seconds, no points made, just insults hurled—a shouting match in broad daylight—with other pedestrians circling around them and saying nothing themselves.

If this was my home neighborhood in Alexandria, Virginia, I would have stepped right outside, held up my hands in a pacifying gesture, and gotten between them with a “Please, please, ladies, what’s the matter?” Now in New York, though, I paused. At that moment, Woman No. 1 had had enough. She reached into a pile of trash at the curb, grabbed an object, and heaved it at woman No. 2. It hit the steps with a bang. She grabbed another one, heaved it, and I heard a clatter of broken glass. Woman No. 1 marched away toward First Avenue, still yelling; woman No. 2 had disappeared. The next morning, some workmen arrived to repair the front door. Apparently the window in it had been shattered.

I left New York four years ago, when the signs of public decay were already starting. The election of Donald Trump to the presidency seemed to have made a good number of the residents of Manhattan a little crazy. In the long walkway in the Union Square subway station, the very next day, people had started to attach sticky notes to the tile walls expressing their fear and dismay over the result. After two weeks, the number of notes looked like it had reached the high four-figures.

One Saturday morning, I went outside and encountered a small parade of solemn New Yorkers passing by on Second Avenue, some of them humming “We Shall Overcome.” Not long afterward, I tried to cross Central Park West, but had to wait and then file my way through the thousands of people marching for “science,” the common assumption being that Trump would bring a bunch of troglodyte climate-deniers into office and hasten the environmental ruination of the Earth.

Of course, political demonstrations in the city were nothing new. In the months and years after the Supreme Court’s same-sex marriage decision, the LGBTQ complex didn’t ease up on its activism. On the contrary, pro-gay messages were everywhere (“Love Is Love” and so forth), as were Pride flags and placards showing same-sex couples in lusty embraces.

Pride Month was celebrated in thousands of store windows, and local events were held, as well as more parades and parties. This wasn’t a live-and-let-live, do-your-own-thing outlook. It was an aggressive, in-your-face campaign that told social and religious conservatives to shut up and deal with it or go away.

In November 2016, the pressure grew. It was as if the triumph of Trump had forced activists, marchers, and organizations such as Human Rights Campaign and the Southern Poverty Law Center to become more accusatory, more coercive, and less tolerant. Manhattan was a center of this new illiberalism. One didn’t dare wear a MAGA cap in Central Park.

There’s a connection between this political rancor that increased so much in 2015 and 2016 and the breakdowns we see on the streets of New York today. It doesn’t matter that sidewalk confrontations have no overt political content. The latter follows the former. When liberals and leftists took a “Resist” line on the victory of Trump, they believed they were targeting the Trump administration alone. When the media fed the public a pack of lies about Russia collusion, they assumed the American public would understand the coverage as focused on one man.

But that’s not how it came off. To cast the man in the White House as invalid was to question the state of the entire system. To disparage the humanity of a man that 60-plus million people supported was to charge the entire country with inhumanity. Only a shameful nation could have such a shameful leader—that was the logic. And when you had educational institutions, the entertainment industry, and a political party echoing these allegations of American shame with howls of “systemic racism,” “fascism,” and the rest, the general conclusion by many was that we had a society with laws that needn’t be observed and with citizens that needn’t be respected.

Why behave civilly when the public square isn’t any good? If you have no faith in the goodness of your fellow Americans, well, you do what you want and tell others to get out of the way. You yell in the street, you litter, you take offense quickly, you break minor laws and feel no remorse, you blast your music, you don’t care. You live in a place with a negative value, you’re led by a monster, and life is short.

The attitude is self-confirming. If you think this way—and if there are enough of you—the streets and neighborhoods become precisely what you think they are. That’s why I took my family somewhere else in 2017; because the vandals of public life were multiplying. When a merchant with whom I had an afternoon appointment in Midtown made a point of telling me how to get there without going “underground”—that is, by the subway—it was clear that the conviction wasn’t only that of a social conservative.

What has been frustrating as the street and shopping areas have descended ever further into coarseness and disregard is that liberals in the United States won’t draw a connection between their anti-Trump, anti-conservative positions and the current social breakdowns. They won’t acknowledge that the way in which they attack Trump and Trump’s America is an attack on America itself.

They believe in “telling the truth” about America’s ignoble past—slavery, Jim Crow, Indian genocide, Vietnam, and so on—however debatable those truths may be—but won’t consider the effect of those truths on young people. They don’t ask how a 16-year-old African American male will receive the wisdom that his country lynched and raped his forebears and despises him today. They haven’t pondered the effect of their cynicism upon a youth of any kind just entering the great big world. They don’t understand that believing the nation they inhabit is awful is an awful condition and that it shows in the public behavior of a rising number of Americans young and old.

This is a fact that enlightened liberals won’t face. They assume they occupy a moral high ground when they criticize their country. They treated Trump’s America First outlook as abominable. But most Americans want to feel good about their country. They like to put America first.

The enlightened ones aren’t doing their fellow citizens any good with this. They’re killjoys and spoilsports. They’ve poisoned the public space with their “critical thinking” about the country that has served them so well. They’ve demonized Americans who don’t think like them. They see a working-class American with an American flag decal on his truck and think “hick” or “bigot.” They’ve taken a natural devotion and distorted it into an immoral faith. We see the effect of their opinionating every time we go outside and frequent the streets and stores of New York.