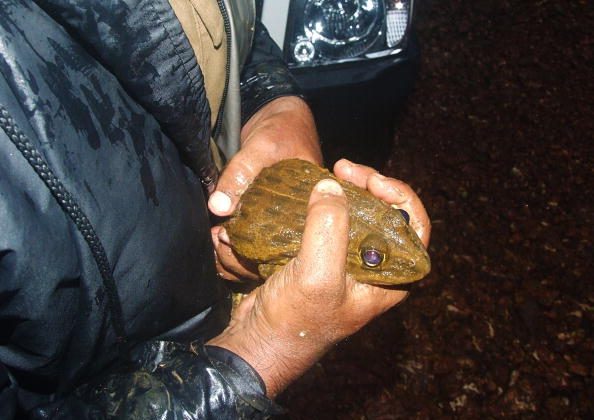 Frogs living in Western Ghats forests that were logged more than 40 years ago are still recovering from the impacts of deforestation, shows a recent study. Comparatively, unlogged forests had twice the number of frogs. The study also found some species of amphibians to have completely disappeared from logged areas.

In the remote forests of Kalakad Mundanthurai Tiger Reserve (KMTR) near Tirunelveli in Tamil Nadu, large areas of forests were cut down until the 1970s. For the first time in India, researcher Seshadri K S examined the effect of selective logging in KMTR on frogs. “Selective logging” is the cutting down of only commercially important tree species for timber and softwood industries. This type of “selective logging” is widely thought to have lesser detrimental impacts than deforestation, or indeterminate cutting down of trees without bothering about the type of species.

In a paper published in the international journal Biotropica, Seshadri compared frog communities in selectively logged and unlogged forests. He found that the affect of such logging was negative on the population of frogs as well as the diversity of frogs in such forests.

Frogs are extremely sensitive to variations in atmospheric temperature and moisture availability and face severe threat of extinction due to deforestation. Also, they cannot move around as much as large mammals and birds can, making them excellent indicators for the state of the forest.

Across different types of habitats, selectively logged and unlogged forests contained similar kinds of species, but frog density was double in unlogged areas as compared to logged areas. Streams and forests immediately adjacent to streams had the highest density of frogs in both unlogged and logged areas. Stream and riparian areas are known to play a very vital role in regulating moisture and providing refugia to amphibians during harsh weather. Several studies have suggested that stream habitats be left untouched during logging.

Further, at a species specific level, For example, the Kodayar Dancing Frog occupied fast flowing streams, leaf litter and pools adjacent to streams in unlogged forests but was found only in fast flowing streams and leaf litter in logged forests. It had reduced its ‘niche breadth’ probably because in logged areas, pools near streams were destroyed.

On the other hand, The rock and grass bush frog, was found only on bushes in unlogged but was found on bushes, leaf litter and rocks adjacent to streams. This trend indicates an increase in niche breadth of the bush frog. This increase may be due to increased growth of understorey vegetation due to logging.

“Only a handful studies have examined the effects of such selective logging on amphibians and they all report negative effects. This study adds to the existing body of knowledge on the impacts of logging”, said Seshadri. “If only vegetation regeneration is examined, one would think the forests have recovered from the selective logging. But that would be untrue.” “This study clearly elucidates how the effects of logging have persisted on amphibian density and has affected the occupancy of niche and its overlap.”

“Apart from the ill effects of logging, damming of rivers and streams under the pretext of mega and micro hydel projects will permanently alter the stream characteristics. Leaf litter harvest from forests for mulch can also have severe effects on frog populations” he adds.

“The findings from this study suggest that the age old “umbrella” species where the top charismatic animal is protected and everything in the forest is assumed to be doing alright does not really work,” emphasized Seshadri.

Western Ghats of India is an important global biodiversity hotspot, especially for amphibians. In the last decade, close to 50 new species of frogs have been discovered from these forests. With mounting pressures of development like road and dam construction, forests will be impacted. This study is a short one, carried out in one tiger reserve. What is needed is an extensive study across areas to draw generalizations for conservation management and mitigation.

This article was originally written and published by Atula Gupta, the head administrator for indiasendangered.com. For the original article and more information, please click HERE.