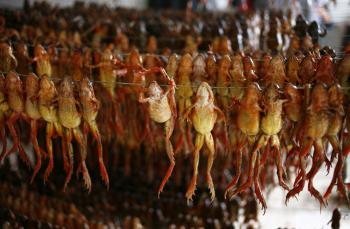 Chinese Forest Frogs, to be dried in the sun, at a frog fat processing factory in Jilin Province, China; used as delicacy and valuable medicine. (China Photos/Getty Images)
Science

Frogs Are Being Eaten to Extinction

The global trade in frog legs for human consumption is threatening their extinction, according to a new study.

The international researchers say the global pattern of harvesting and decline of wild populations of frogs appears to be following the same path set by overexploitation of the seas and subsequent "chain reaction" of fisheries collapses around the world.

The researchers have called for mandatory certification of frog harvests to improve monitoring and help the development of sustainable harvest strategies.

"Frogs legs are on the menu at school cafeterias in Europe, market stalls and dinner tables across Asia to high end restaurants throughout the world," said Professor Bradshaw.

"Amphibians are already the most threatened animal group yet assessed because of disease, habitat loss and climate change – man's massive appetite for their legs is not helping."

The annual global trade in frogs for human consumption has increased over the past 20 years with at least 200 million and maybe over 1 billion frogs consumed every year. Only a fraction of the total trade is assessed in world trade figures.

Indonesia is the largest exporter of frogs by far and its domestic market is 2-7 times that.

"The frogs' legs global market has shifted from seasonal harvest for local consumption to year-round international trade," said Professor Bradshaw. "But harvesting seems to be following the same pattern for frogs as with marine fisheries – initial local collapses in Europe and North America followed by population declines in India and Bangladesh and now potentially in Indonesia.

"Absence of essential data to monitor and manage the wild harvest is a large concern."

The study team also includes researchers from the Memorial University of Newfoundland in Canada, the National University of Singapore and Harvard University. A paper about the study is soon to be published online in the journal Conservation Biology.