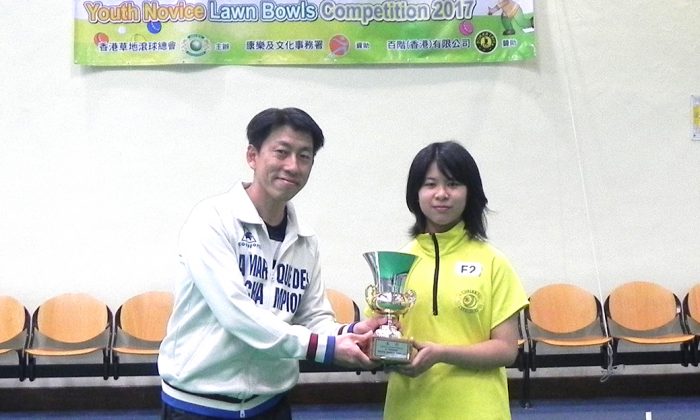 The Youth Novice Lawn Bowls Competition celebrated its 10th anniversary with the first ever girl winner.

Thirteen years old Tam Wing Chui, a Form 1 student at the Yan Oi Tong Tin Ka Ping Secondary School in Tuen Mun, is a member of the Young Athletes Lawn Bowls Training Scheme (YAS) attached to Tuen Mun. She has been joining this competition since her introduction to lawn bowls four years ago.

In the double round-robin before the semi-finals, Tam had only lost one game to schoolmate and YAS teammate Kwan Tsun Hin who, coincidentally was her opponent in the final.

Boosted by the confidence generated from the previous game, Kwan started the game well and lead by 4:1 after five ends. Tam kept her composure and drew level after two more ends. Kwan took a two shots lead at the penultimate end but Tam won two shots in the last end to force the game into a tie-break.

In the extra end, Tam kept cool and drew the shot to take the title.

Tam was really happy about winning her first title in lawn bowls, she said, “I think my performance is just mediocre but the key is that I tried very hard throughout the competition.

“I started bowling in Primary 4 when the school organized lawn bowls as extra-curriculum activities. I have been playing for four years and quite like it. As I am still new I don’t have any ambition yet. I would just like to continue enjoying it,” said a jubilant Tam.

Kwan, who is 12 years old, thought that he performed quite well and believed that it would go either way when the game was forced into extra end. He vowed to win the title next year.

First played in 2007, the Youth Novice Lawn Bowls Competition is open to bowlers under the age of 18 years who have never won any national competitions or youth competitions. This year, a total of 41 youngsters entered the competition, including 29 boys and 12 girls.

The competition format is a multiple level round-robin. Players who topped the second roundrobin qualified for the knock-out stage.  All games were played over the last two Sunday at the Ap Lei Chau Sports Complex.