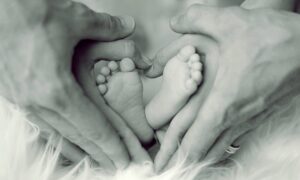 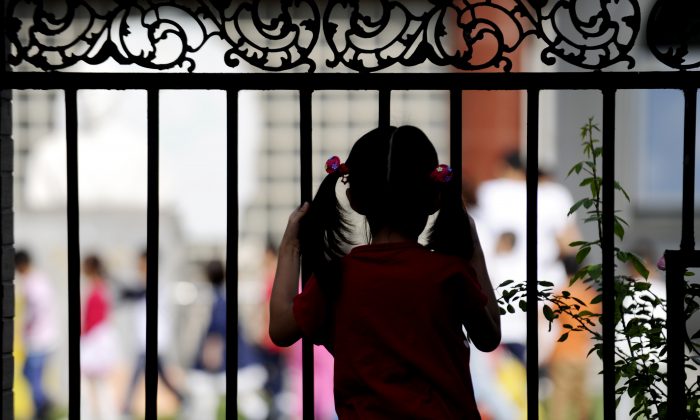 A girl in Beijing on Sept. 19, 2012. China's elderly face increasing uncertainty three decades after the one-child policy took hold, with no real social safety net, the law has left four grandparents and two parents with one caretaker in old age, and bereaved families with none. (Wang Zhao/AFP/GettyImages)
Thinking About China

The Chinese Communist Party (CCP) conducted its Seventh National Population Census (hereinafter referred to as the Census) using 00:00 hours of Nov. 1, 2020, as the reference time. Although an official government report of the census reveals an increase in China’s population, the CCP hastily launched the “three-child policy” because its economic growth, which is “stable with a growing momentum,” as claimed by the state-owned People’s Daily in May, is actually no match for the current fertility crisis in China.

An unnamed senior official from the CCP Health and Family Planning Commission revealed three sets of data during an interview with the CCP mouthpiece Xinhua news agency on May 31.

These two groups of data coincide with a current social phenomenon in China called “lying flat,” which seems more popular among the majority of the post-90s than traditional marriage and children.

The third group of data shows that there has been a significant reduction in the number of child-bearing age women. From 2016 to 2020, the average annual number of women in their “reproductive prime” (a CCP term for women aged 20 to 34)  decreased by 3.4 million, while the year 2020 alone saw a decline of 3.66 million. If calculated using the average annual decrease, the total reduction of women of child-bearing age during the past five years amounts to 17 million. Therefore, it can be ascertained, with reasonable doubt, the veracity of the birth rate disclosed in the seventh national census.

In addition, the official statistics show that since 2000, birth rates in China gradually declined, and the number of births since 2002 was down by several million compared to the number estimated in 1987. In other words, the number of women of reproductive age could continue to fall significantly every year in the following decade.

Thus, the primary cause of China’s current fertility crisis is the reduction in the number of women of childbearing age. The situation will not see much improvement even if the Communist regime completely removes childbirth control measures and even pays for all childcare costs, education, and housing.

What is more astonishing is the data hidden behind the statistics, which shows the reason for the decline in the number of women of child-bearing age. The “three-child policy” set off a huge backlash on May 31 on social platforms such as Weibo, but the next day, thousands of the discussion posts were deleted.

The CCP propaganda authorities were extremely frightened by the fact that among the various sarcastic messages posted, some touched on sensitive topics and went from metaphorical to explicit.

One netizen asked: “Why is there such a big reduction in women?”

If you google these posts now, search results will lead to a page with an exclamation mark, followed by this sentence: “er … what you want is not here.”

One post on the Douban group, a forum for young netizens, referred to the thirtieth anniversary of the “Childless Hundred Days” campaign in which the massive killing of babies and the abortion of fetuses by Guan County and Shen County in Shandong province occurred in 1991. Zeng Zhaoqi and Bai Zhigang, secretaries of the county committees, ordered  a forcible abortion of every pregnancy in the 100 days from May 1 to August 10 that year. There were literally no newborns during this period, and even newlyweds having their first child were not spared. Any babies born alive during an induced abortion were simply strangled. A post in a Douban group says that the “One Child policy is a history of the massacre of a generation of girls.”

Various slogans extolling birth control were created back then. Some examples of these slogans include: “I’d rather die heirless than make the Party worry.” “Be it medical abortion, surgical abortion, or forced abortion, just don’t give birth to a baby!” “Even if blood flows like a river, no one is allowed to have one extra child.” “Hang yourself? You’ll get a rope [from the government]. Wanna take poison? You’ll get a bottle!”

In an article titled “Make Social Maintenance Fee Public As It’s Relevant to the Innocence of Family Planning Organizations,” published in the Southern Weekly in 2013, Zhi Zhenfeng, an associate research fellow at the Chinese Academy of Social Sciences (CASS), disclosed that the total fees collected may have reached at least $234,627,945,000 over the past 30 years, including the predecessors of social maintenance fees such as fines for having more than one child or fines for unapproved births.

If we look solely at the social maintenance fee, it is estimated to be more than $3 billion each year. While the estimates are certainly inaccurate, there is no doubt that the amount of social maintenance fees collected is shockingly huge. That said, relevant authorities and organizations have not made public, in detail, the sum of the fees collected nor their ultimate use since August 2002.

Zhi also points out that “Yi Cheng, Shanxi province, started the pilot implementation of the second child in July 1985, and that, after 28 years of experimentation, until 2013, the local population didn’t see any significant increase. On the contrary, its population growth was lower than the national average, and all population indicators, represented by the sex ratio, were better than the national level.”

However, there is only one population special zone in China, and that is Yi Cheng.

The one-child policy, also known as family planning policy, originated from the “Open Letter to All Communist Party Members and Youth League Members on Controlling the Country’s Population Growth” issued by the CCP Central Committee on September 25, 1980. The letter clearly stated: “In 30 years’ time, the current particularly tense population problem can be eased, and a different population policy can be adopted.”

In other words, this political promise of the Chinese Communist regime was already bankrupt in 2010, the 30-year anniversary of the implementation of the policy. To date, the CCP has not acknowledged its mistakes, nor has it apologized to the huge number of mothers and children who were victims of the policy. Yet it still expects the Chinese public to be “grateful” for its three-child policy. Its level of shamelessness is just as shocking as the suffering of the victims of its one-child policy.

Chen Simin
Follow
Chen Simin is a freelance writer who often analyzes China’s current affairs. She has contributed to The Epoch Times since 2011.
TOP NEWS