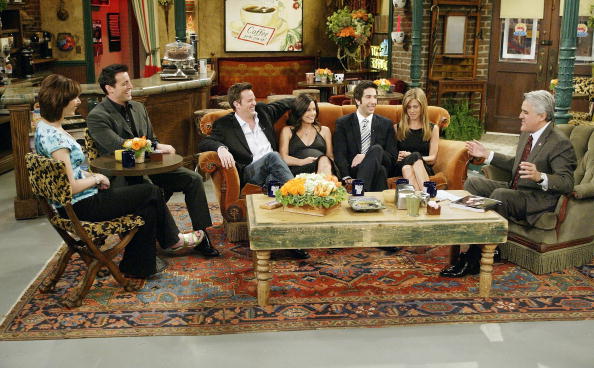 In this handout photo provided by NBC, the cast of Friends, actors Lisa Kudrow, Matt LeBlanc, Matthew Perry, Courteney Cox-Arquette, David Schwimmer and Jennifer Aniston sat down with Jay Leno for a special "Tonight Show," on the set of Central Perk on May 6, 2004. (Paul Drinkwater/NBC via Getty Images)
Entertainment

There’s been a slew of hoaxes and rumors on social media websites saying the show, which ended a decade ago, would come back. One is of a poster created by a fan that says the show will be back around Thanksgiving 2014 and isn’t true.

LeBlanc was nominated for an Emmy for his Showtime comedy, “Episodes,” on Thursday.

Speaking with the Los Angeles Times, LeBlanc said he’s not tired of hearing about the “Friends” rumors.

“I’m not tired of getting asked that question at all. ‘Friends’ was probably the greatest 10 years of my life. I’d be hard-pressed to find something that matches that in terms of success and just sheer fun. So anything that harks back to that has a soft spot in my heart,” he said.

LeBlanc said there’s no plans for a reunion.

“As far as a reunion project, that’s just not in the cards. I think that show was about a finite period in your life — after college and before you start your family where your friends are your family — and that’s what that show was about. So to go beyond that doesn’t feel like you’d do justice to that. I liken it to that saying that the book is always better than the movie. I think it’s best to imagine what those characters are doing now versus to see those characters. No one wants to see us in our 40s (laughs). Joey’s still struggling as an actor. It’d just be sad,” he said.

“Only because once you say, ‘Well, I’d like it,’ then they have to contact every other cast member and be like, ‘Courteney’s into it!’ And then I get in trouble. It’s not going to happen,” she told David Letterman on his “Late Show.”

She added: “Let me tell you something: there’s six friends and I’ve been trying to put together a cast dinner for 10 years. It doesn’t happen! I can get the girls to come, maybe Matthew Perry. Matt LeBlanc canceled last time right at the last minute, Schwimmer lives here [in New York City], so it’s just not gonna happen.”