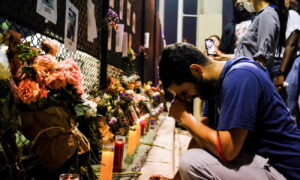 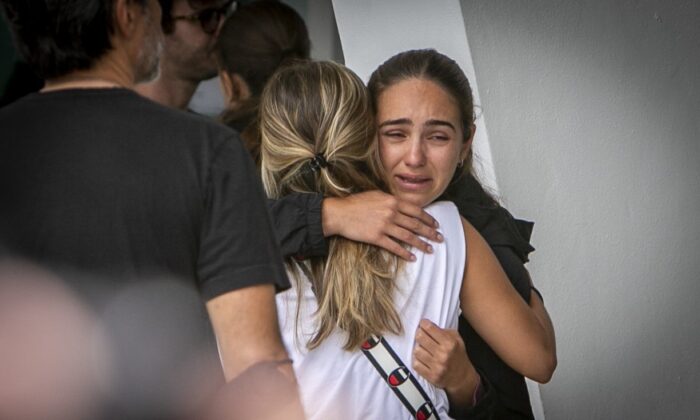 Two women comfort each other at the Surfside community center where friends and family of those missing following the collapse of a residential building wait for new developments in the search for their loved ones, in Surfside, Fla., on June 25, 2021. (Jose A. Iglesias/Miami Herald via AP)
Florida

SURFSIDE, Fla.—Families around the world remained stuck between waning hopes and widening fears Saturday, two days after the stunning collapse of a 12-story condominium near Miami.

At least four people were killed and more than 150 people remained unaccounted for as rescuers continued to dig through the rubble of the Champlain Towers South in Surfside. The building was home to an international mix of foreign retirees, South American immigrants, and Orthodox Jews, all with anxious loved ones across the globe.

Here are some of their stories:

Maria Theresa and Ricky Rovirosa are a “perfect match” who support each other and others, according to longtime friend Monika Mucarsel Gressier.

The couple has two grown children they raised in their South Miami home, and used their Surfside condo as a part-time summer getaway. Gressier was living in California when she met Maria Theresa, whom she called Maituca, through work.

“We became instant friends,” Gressier said in a text message. “She was one reason that gave me security and support for accepting a relocation to live in Miami. Maituca became my family support and always gave me and others the resources and guidance to navigate through the city of Miami.”

Gressier described Ricky as charming and his wife as “stunningly beautiful” inside and out.

“When I think of them, I think of one of my favorite memories of the times I watched them dance salsa and how loving they were always to each other,” Gressier wrote. “I am praying and hoping that they will survive this tragedy, as I know the strength, they both carry within, and I also know that their tremendous love for their girls and family will keep them fighting to survive this.”

Cassondra Billedeau-Stratton, 40, has worked as an actress, model, and Pilates instructor, bringing “a vivacious love of life to everything she does,” her husband said in a statement.

“Cassie is a wife, mother, and true friend to so many,” said Michael Stratton, a Democratic political strategist from Colorado. He told Denver’s KMGH-TV that he and his wife spent much of their time during the coronavirus pandemic in the condo they have owned for four years.

Billedeau-Stratton loved walking and biking along the beach, her sister, Stephanie Fonte, told the New York Times. When the sisters were together, she often would make them pose for photos on the beach or near a burst of flowers.

Michael Stratton said he and his wife were talking on the phone when the building collapsed.

“She described that the building was shaking and then … the phone went dead,” he said.

Ilian Naibryf has been an active member of the Jewish community at the University of Chicago since arriving at the school three years ago, said Rabbi Yossi Brackman of the school’s Rohr Chabad.

Naibryf, who just finished his junior year, served as the president of the Chabad House’s student board for the past year. He is from Florida and was at the condominium when it collapsed, Brackman said.

“He is a really great guy, very friendly, always has a smile on his face, and is just a really all-around well-liked person,” Brackman said.

Brackman said the Rohr Chabad community is distraught but hopeful.

“Our message is one of hope and we encourage everyone to pray and be kind at this difficult time for many people,” he said. “We believe in miracles, seen them, and hope to see them again.”