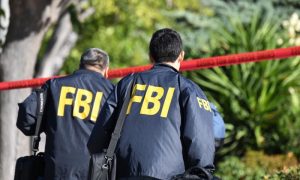 The shooting deaths of a Texas mother and her two daughters was ruled a murder-suicide, but friends have cast doubts on the ruling.

The Bexar County Medical Examiner’s Office ruled the deaths of girls Alexa, 16, and London, 10, as homicides. Mother Nichol Olsen’s death was ruled a suicide, according to News4 San Antonio.

‘She would NEVER kill herself’: Friends demand answers after beloved mom & young daughters found dead inside immaculate mansion, while boyfriend says he was away for the night

“We can’t just say, ‘Oh, well then she must’ve been the one that did this to these two little girls,'” Sheriff Javier Salazar told News4. “We still have to go out and find out who it was that killed these two young ladies.”

He said the same about the suicide ruling.

“Our investigation may concur with the medical examiner,” the sheriff stated. “Or we may find something through the course of our investigation that may change that finding all together. At this point, it’s just too early to tell.”

While authorities continue to investigate the case, those close to Olsen say that she would never have ended three lives so violently.

One friend said the shootings were not done by Olsen.

“No one, not ONE person who knew Nichol, can tell you she was capable of killing her girls,” Nichols’ friend, Vanessa Cardona, told CrimeOnline.

Rick Wright, another friend, said he thought she was murdered and would “never kill herself.”

On January 10, Nichol Olsen and her two young daughters, Alexa and London, were found shot to death inside their San…

The crime scene was discovered by the owner of the property where the bodies were discovered, according to People magazine. The owner was in a relationship with Olsen.

He told police that he was not at the home on the night of the shootings, KTSA reported.

The homeowner is cooperating with authorities in the case, Salazar said.

Their family beg for answers… heartbreaking

“Yeah, you’re a person of interest if three people were found deceased in your home, whether you were there or not, and two of them have been listed as homicides,” Salazar said, People reported. “We’re a long ways off from naming anybody culpable in the deaths of these girls,” he added. “But we’re also a long ways off from clearing anybody.”

The father of slain daughter Alexa, Carlos Montez Jr., also said he does not believe Olsen would commit such a crime.

“She loved them too much,” Montez said of the girls, the San Antonio Express-News reported. “She had so much joy in her life and so many things going for her. There is absolutely no way that we believe she is responsible for everything that happened.”

The Daily Mail reported that they were found dead inside a $1 million mansion, owned by her boyfriend, Charles Wheeler.