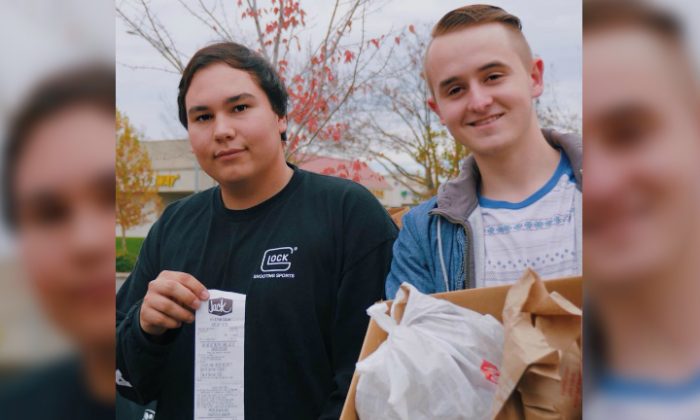 Cancer sufferer Chris Betancourt (L) and his best friend Dillon Hill have created a bucket list of over a hundred things to do. (Screenshot via One List, One Life/Facebook)
US News

Chris Betancourt and Dillon Hill are on a mission together: to live each day as it was their last. For one of the young men, that idea is closer to the truth than most would want.

Betancourt, 20, from North Carolina was diagnosed with Chronic Mylogenous Leukemia in 2009. He managed to enter remission but he was told in September that the cancer had come back.

If Betancourt does not have a successful bone marrow transplant, then he has one to two years to live, the doctors have told him.

My best friend was interviewed by @kcranews. The support and the fact that people want to hear his story is incredible. We appreciate the interest and love. #onelistonelife #mybestfriend #bonemarrowtransplant pic.twitter.com/54hIB6MRIC

His 19-year-old buddy dropped out of college with the idea to help him make the most out of his remaining time in life, and so they made up a bucket list.

“We want the list to reflect what life is, and we think that life is never done being experienced,” Hill told The TODAY Show.

Initially, their list was to do 50 things such as help feed homeless people, sing for a large audience, and see the Sequoia National Forest in California.

Another item on their bucket list was to appear on TV.

FRIENDS FOREVER. After 20-year-old Chris Betancourt's cancer came back and was given a year to live, his best friend dropped out of college to help him fulfill his bucket list. This day, they crossed off feeding the homeless. https://t.co/T3gtmlVvY7 pic.twitter.com/pvrDRvz44f

Now that list has grown to 117 things, and that’s what they are aiming to do. According to their website, the best friends have done six of the things on their list so far.

“When he called me, he also mentioned he was afraid of not being able to experience life,” said Hill.

“Chris was first diagnosed in fifth grade, and in his sophomore year, his sister suicided,” he said.

“I have been with him through all of this and he has never been able to have a childhood or do things that normal people do.

Betancourt described the journey with his best friend as “amazing.”

Another one of their buddies, Hrach Avetisyan, has also joined in to help Betancourt reach his life goals.