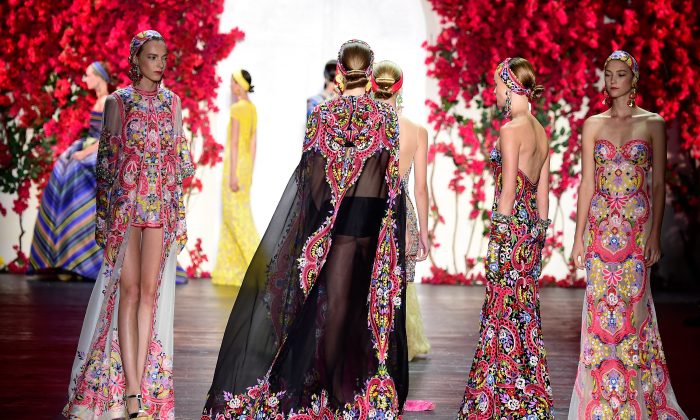 Friday Essay: How New York Fashion Week Came to Be

New York Fashion Week kicked off last night. Celebrities, designers and bloggers (and the increasing number of “slashies” that embody all three) have descended on the Big Apple to drink champagne, admire eye-wateringly expensive clothing, and air kiss one another.

Kim Kardashian is set to make her first public post-baby appearance at husband Kayne West’s Yeezy fashion show later today. West will also be debuting his new album The Life of Pablo (formerly known as WAVES), live streaming the concert/show from 8am AEST.

After a short hiatus from the event, Mary-Kate and Ashley Olsen’s cult brand, The Row, will make a hotly anticipated return to the American runway on Feb. 15.

And you can bet that Anna Wintour will watch, sphinx-like behind her enormous Chanel glasses, as close friend Marc Jacobs brings the week to a triumphant close with his climactic show.

For a certain kind of person, New York Fashion week is a “must”. For those of a certain age, income and social status, the event is not just a fixture on the social calendar but a high point.

Even for those who aren’t in possession of that enviable trifecta (including me), the slavish devotion the event inspires is familiar through many fictionalized and semi-fictionalized explorations of New York City (think Sex in the City, Gossip Girl, Project Runway, and The Real Housewives of New York City).

But how did it all get started? Why did it begin? Was there even a New York Fashion Week before Anna Wintour?

New York Fashion Week has not always been exalted or esteemed. The event is actually a relatively recent phenomenon: it can be traced back to 1943, when it began as Fashion Press Week. Up until that point, American women overwhelmingly purchased American-made copies of French designs, and thus the American fashion industry was overshadowed by its Parisian counterpart.

During World War II, however, access to the Gallic center was cut off by the German occupation. This presented the American fashion industry with a unique opportunity, and Eleanor Lambert, the canny director of the New York Dress Institute, took advantage of this by clustering the American fashion shows into a single “event” to promote home-grown design.

To be clear, these weren’t the first ever fashion shows. From the turn of the century, many individual fashion labels and stores hosted their own shows in department stores and hotels throughout Paris and New York in a bid to drum up business. But Fashion Press Week was the first coordinated fashion event to showcase numerous designers of the same nationality.

Even more importantly, the event also proved the effectiveness of this new approach. Although the initial response wasn’t encouraging—only 53 of the 150 journalists Lambert invited to the first Fashion Press Week attended—the impact of the event was strong and swift.

In its wake, the American press heaped praise upon local designers such as Claire McCardell, and New York Mayor Fiorello LaGuardia boasted that:

the only reason Paris set styles all these years was because buyers like to go there on holiday.

In a bid to reclaim its former dominance, as soon as the war ended the Chambre Syndicale de la Haute Couture organized the first seasonal showings of Parisian couture to the international press. Along with the emergence of Christian Dior and his sensational “New Look”, this bi-annual event – which commenced in 1945 – was pivotal in re-establishing the Gallic capital as the sartorial leader of the Western world.

In the immediate post-war period, showings in London also created ripples (although not the tidal waves that Paris did). In January 1942 the London couture industry established its own official organization, The Incorporated Society of London Fashion Designers, which began to host fashion shows after the war.

Bettina Ballard attended these events in her role as fashion editor of American Vogue, and recalled in her memoir In My Fashion (1960) that:

Unfortunately, at this stage the British weren’t so good at sealing the deal, and Ballard noted “the whole couture performance was carried on […] in a rather grand detached manner” as they “never pressed for publicity or even tried to make the buyers buy”.

The first, held in his sumptuous Florentine villa in February 1951, was not a success (180 pieces by numerous Italian designers were viewed by just eight American buyers and a lone fashion journalist—an even worse turnout than Lambert’s first endeavor in New York).

But its successor in July 1951 was a triumph, with 200 American buyers and journalists in attendance, and the event was thereafter established as essential for the fashion-minded.

By the early 1950s, the advent of these rival fashion shows had diluted the sartorial impact of New York’s pioneering event. The annual trips to Paris that LaGuardia had gloated were no longer necessary during the war were back with a vengeance by the late 1940s.

Even worse, they were now the gateway to yet more European options. As Bettina Ballard explained of her own annual migrations:

although Paris was the main objective of each trip, it was also the door to all Europe. I very soon found, along with the postwar travel-starved buyers and the fashion press, how pleasant it was to travel on an expense account with the legitimate excuse of looking over new fashion markets.

In front of a crowd full of celebrities, socialites and aristocrats, the Americans stole the show, proving that they could not only compete—but actually win—against their old French rival (and on French soil, to boot).

More broadly, the advent of second-wave feminism during the 1970s also repositioned American ready-to-wear as the ideal solution for the new “working woman”. This development boosted its popularity with both American women and the American press, and generated effusive praise of anything all-American.

A round-up of the New York collections in a 1976 issue of American Vogue, for example, now boasted:

American Fashion at the Top of Its Form: Racy, Freewheeling … Casual!

This newfound legitimacy was solidified when the more informal and improvised fashion shows of the postwar period became slick, professional events. The term “Fashion Week” actually wasn’t adopted until remarkably recently: the French Fashion Federation held the first “Paris Fashion Week” in 1973; the British Fashion Council organized its inaugural “London Fashion Week” in 1984; and the Council of Fashion Designers of America waited until the early 1990s to debut “New York Fashion Week.

It also was during this period that the American shows—which had previously been scattered across town—were centralized in one location (first in “the tents” in Bryant Park, then in Lincoln Center, and from 2015 shows have been split between the Skylights at Moynihan Station and Clarkson Square. Increasingly, the event is becoming decentralized again, with shows held at a variety of off-site venues throughout the city).

But although last to adopt the term “Fashion Week”, New York remains the first stop during fashion season (every February and September, back-to-back fashion shows are held sequentially in New York, London, Milan and Paris).

Yet New York’s leading role is fitting. Certainly, New York has become one of the great fashion centers of the modern world, a place where trends are forged and significant money is made. But New York is also where the concept of “Fashion Week” was first conceived and executed, a history neatly mirrored in its prestigious opening slot.

Anna Lebovic is a research associate at the United States Studies Centre, University of Sydney. This article was originally published on The Conversation.