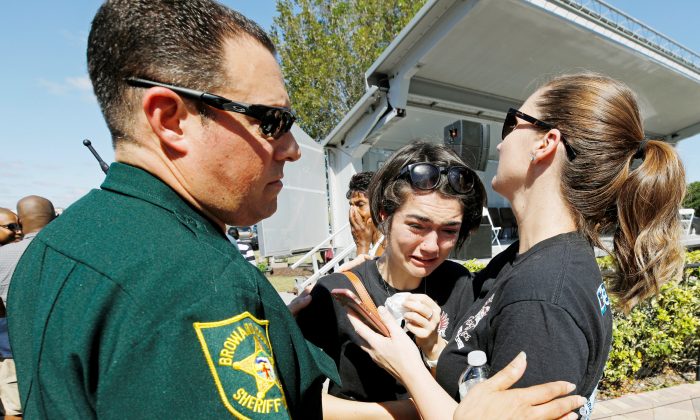 A mother tries to comfort her weeping daughter at the end of a community prayer vigil for victims of yesterday's shooting at the nearby Marjory Stoneman Douglas High School in Parkland, at Parkridge Church in Pompano Beach, Florida, on Feb. 15, 2018. (Reuters/Jonathan Drake)
Crime and Incidents

Freshman Reveals Shooter Let Him Escape, Warned Him ‘Things Are Gonna Get Messy’

A freshman who attends the Florida school where 17 students and teachers were shot dead said the shooter let him escape and urged other students to “get out” because “things are gonna start getting messy.”

Chris McKenna, 15, said that he ran into the alleged shooter, Nikolas Cruz, a 19-year-old who wasn’t attending school because he’d been expelled, in the hallway.

McKenna was going to the bathroom on Wednesday when he encountered Cruz.

“You’d better get out of here,” Cruz told McKenna, according to the Sun-Sentinel, “things are gonna start getting messy.”

McKenna said he fled outside, where he was escorted to a safe place by assistant football coach Aaron Feis.

Feis became one of the 17 victims when he went back into the school to try to save other students.

Eyewitnesses said that Feis shielded students at one point with his body, eating bullets and ultimately dying for his heroics.

“I told him I saw a gun,” McKenna said. “He said ‘let me go check it out.’ Then he drove me to the baseball field, dropped me off, and went back to the school. That’s the last I saw of him.”

“He selflessly shielded students from the shooter when he was shot. He died a hero and he will forever be in our hearts and memories,” the account said.

Cruz was arrested hours after the shootings first started, at an apartment complex near the Marjory Stoneman High School in Parkland, north of Miami.

Cruz was charged on Thursday with 17 counts of premeditated murder.

It was later revealed that the FBI was warned of Cruz months ago but did not act on the information.