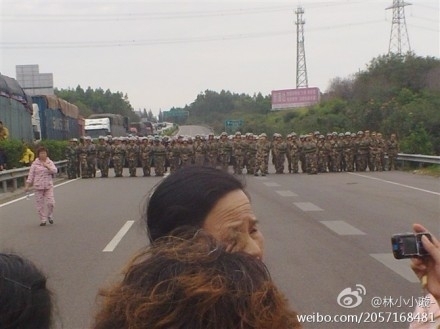 A mass demonstration broke out in Haimen of Shantou City in Guangdong Province on Dec. 20, as thousands took to the streets to protest the local authorities’ approval of a second coal power plant in the area. The Communist Party’s response was a stark contrast to the recent conciliatory approach in Wukan: they dispatched riot police who fired tear gas and beat protesters with batons, leading to two alleged deaths.

Shantou is around 60 miles from Wukan village, where demonstrators have been in an open standoff with the authorities for nearly two weeks. It’s unclear if the protesters in Shantou were taking a cue from their Wukan brethren, who have been remarkably successful in attracting international media attention and wringing concessions from the Communist Party by playing provincial officials against local-level cadres.

Protesters took over the town’s administration building and caused gridlock on the Shenzhen-Shantou highway. Thousands of armed police were deployed and beat and arrested protesters, reports indicate. Two 16-year-old middle school students were reportedly beaten to death, according to postings on Sina Weibo which could not be confirmed.

Without consulting locals, authorities built the first coal power plant in 2006, causing serious air pollution. After the decision to build another was made public, locals were furious and spontaneously took to the streets, according to Ms. Lin, a resident of Haimen town, in a telephone interview.

“Town government officials dared not make a dialogue with the people and snuck away. The protesters, estimated about 30,000, had taken control of the abandoned town administration building and had caused a serious traffic jam,” she said. The Epoch Times was unable to confirm the number of protesters.

During the course of the phone discussion, Ms. Lin had arrived at the entrance of the Shenzhen-Shantou highway, where she said all traffic was blocked. At 4pm on Dec. 20 she received another call from the reporter, and yelled into the telephone: “Armed police just arrived and started to beat the protesters!”

Residents and police were injured in the melee, she said, including some protesters that she said were beaten to death on the spot. Others were arrested, and residents fled.

Another witness, also surnamed Lin, told Hong Kong’s Ming Pao that a young man about 24-years-old was badly beaten by police. She together with others helped take him to hospital, but he later died, she was reported saying to Ming Pao.

A reporter from the Sound of Hope radio network called the hospital staff would not provide student casualty figures or report the condition of victims.

Students at Haimen High School were prevented from leaving in the afternoon by teachers, who coaxed them to sit down with cups of instant noodles, worried that they would participate in demonstrations.

Haimen city, located in the prefecture-level city of Shantou, was famous for its clear blue sea and fertile fishery, and is classified as a national high grade tourist attraction. But the first coal-fired Huaneng Haimen Power Plant that was built in the township in 2006 led to the release of pollution damaging to the local environment and coastal waters. The large losses in quantity and quality of fish catches forced local fishermen out of business. The ecological crisis spurred by that power plant and the pollution of Lianjiang River are considered the main factors behind Haimen town having the highest unnatural death rate in Guangdong Province in recent years. With the announcement of a second coal-fired power plant, locals had had enough.