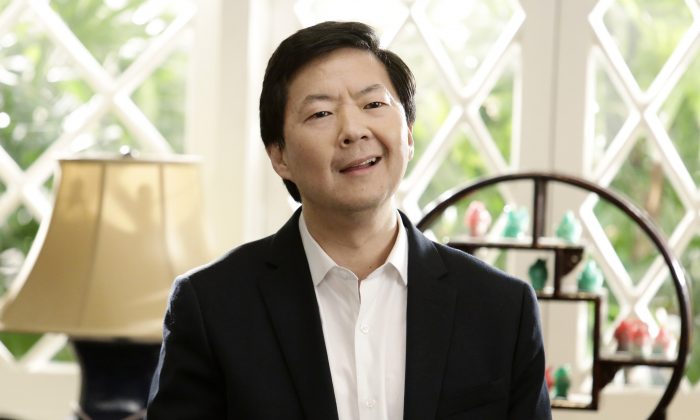 In this image released by ABC, Ken Jeong, center, appears in a scene from, ""Fresh Off The Boat." Jeong guest stars on the season finale airing Tuesday, May 24, on ABC. (Nicole Wilder/ABC via AP)
Entertainment

‘Fresh Off the Boat’ Team Reflects on Breakthrough Sitcom

LOS ANGELES—Television is mostly entertaining, sometimes enlightening and, occasionally, can make a difference.

The sitcom “Fresh Off the Boat” hits all the marks. Because of it, along with ABC siblings “black-ish” and “Dr. Ken” (and, at CW, “Jane the Virgin”), network TV’s American family photo album is starting to look authentic.

The contribution of “Fresh Off the Boat” is especially notable. It’s the first network prime-time comedy about an Asian-American family since Margaret Cho’s “All-American Girl” in 1994, which lasted a season. “Dr. Ken” star Ken Jeong (“Community,” ”The Hangover”) gladly acknowledges that the success of “Fresh Off the Boat” paved the way for his series.

“Even if I wasn’t a part of any of it, never in a million years would I have thought any of this would happen,” said Jeong, who guest stars in the season finale of “Fresh Off the Boat,” airing 8:30 p.m. EDT Tuesday. “It really is beyond satisfying” to see two shows on the air and with characters of different Asian origins, he said.

“Fresh Off the Boat” follows a Taiwanese-American family’s mostly eager plunge into the melting pot of the 1990s. On the flip side, “black-ish” is about a contemporary African-American family’s efforts to hold on to its cultural identity. “Dr. Ken,” about a Korean-American husband and father, gives the formulaic domestic sitcom a cheerful ethnic tweak.

Without losing sight of their primary job, to be funny, the ABC shows make the case that there is—cynics and malcontents aside—a suburban-lawn-sized patch of common ground to be found. The shows’ ratings are proof that viewers are responding, with both “Fresh Off the Boat” and “black-ish” secure on ABC’s schedule and “Dr. Ken” returning for its second year.

As “Fresh Off the Boat” wrapped taping for the season, stars Randall Park and Constance Wu, who star as parents Louis and Jessica Huang, took a set break to reflect on its impact. Executive producer Nahnatchka Khan and Chelsey Crisp, who plays neighbor Honey, weighed in later by phone.

The writer-producer marvels at TV’s sudden burst of inclusiveness, including Aziz Ansari in “Master of None” and Priyanka Chopra in “Quantico.”

“The difference in the past year has been enormous. The fact we were right in the middle of this kind of change is incredible, and we’re really grateful for it,” Khan said. “The more, the merrier. Let’s just keep going.”

“I get stopped on street all the time, with people telling me how much the show means to them and that they watch it with their families,” he said. And it’s not just Asian-Americans, but “everyone,” Park said.

“It’s easy for us to buy into the myths out there that people don’t want to watch a family that’s different from them on TV, that it’s going to be too foreign for people,” he said.

“Fresh Off the Boat” is disproving that. But Park recalls his own early concerns about how his character would be portrayed.

“Even though in the grand scheme of sitcom history there’s a tradition of the goofy dad, to me it was a point of concern because there weren’t a lot Asian sitcom dads to balance that out, or even Asian characters in general,” he said. “He is a character, for sure, but the writers have done such a great job of humanizing him. … For all the silliness to this character, there’s a loving side, a serious side.”

Louis has shown “what a father could be, an immigrant could be — or just a man could be,” Park said.

Wu also felt the weight of high expectations for the series.

“Some people wanted it to tackle race issues, and there’s some people who think the more progressive thing is to not look at race issues and just have them (the family) tackle normal issues such as puberty or cooking,” she said.

But the writers have managed to do both.

“There were episodes about raceless things and ones that really did focus on the uniqueness of our story and navigating through an Asian-American lens,” Wu said. “You can’t please everyone, but the writers have been smart to go on both sides of the issue.”

Related Coverage
The Marketing Corner: A Plethora of Video Opportunities in Television

Viewers have told her, through a flurry of tweets, Facebook and Instagram posts, that it’s “inspirational to have Asian-American characters, and rather than trying to hide their culture they celebrate it and take ownership of the story,” she said.

Playing Honey, the supporting white character in a series dominated by Asian-Americans, is a role that Crisp welcomes.

Sibylle’s Style Diary: Former Real Housewives of New York City Star Jill Zarin on Being Stylish as a Top Entertainer of the Year

“It feels pretty remarkable that we finally got there, and it feels really special to be a part of the show that did it,” she said.

It also evoked a memory of why TV diversity matters.

“My best friend is Korean-American, and when we were growing up there was no one that looked like him on TV. When I first read the pilot, reading the family’s experience of going to Orlando and being the only Asian-American family, it reminded me so much of my childhood friend, Richard,” Crisp said.