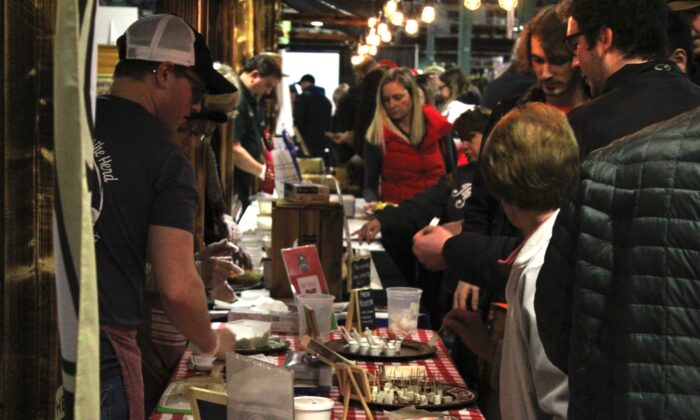 Fresh Fun for All the Pennsylvania Farm Show

HARRISBURG, Pennsylvania—The first time Mee Cee Baker went to the Pennsylvania Farm Show, she was a 12-year-old 4-H member whose pig got loose during the market show and took off into the center of the massive complex. A chaotic scene emerged as the frightened animal ran haphazardly among the large equipment, tractors and people. Everyone in attendance, at least in Baker’s 12-year-old eyes, seemingly chased it down or ran away.

The next year, Baker, who later worked in education and outreach in former Gov. Ed Rendell’s state agriculture department, said she found herself traumatized again but in a different way when she was forced to sleep overnight in a hay bale because a snowstorm left many participants unable to go home.

“But the second time, I was forced to stay over again because of a snowstorm. I was 16 years old,” she said, pausing and then continuing with a broad smile. “That time, it was a lot of fun. We played football with the police in the large arena at night. It was kids against cops. We had a great time.”

Baker has lived at her family’s Port Royal farm in Juniata County her entire life. On a Thursday morning, reports warned of farm-show congestion for all roads leading to Harrisburg. Despite the early hour, and that it was a workday, the parking lots were already full, and Pennsylvania state police were directing people toward spill-off lots that sprang up at local businesses. The lots were needed to handle the crowds that came all over the state and country to the nation’s largest indoor agriculture exposition.

The Pennsylvania Farm Show is a celebration of food; fuel; life; milkshakes; hot, flaky potato doughnuts; fresh double-fried mozzarella cubes; hard work; conservation; and a way of life that is not often understood by outsiders. Yet, once outsiders went to the show and experienced or interacted with the wide variety of farmers who put food on the table or provide the energy the country needs to turn on the lights every morning, they found themselves a little envious of how critically important farmers are to lives in urban or suburban America.

In the farm show’s weekend-to-weekend January residency at the 1 million-square-foot Harrisburg complex, 16 calves and 11 piglets were born, one of which I held; nearly 400 chicks were hatched; and the dairy cows were busy producing 450 gallons of milk every day, all of which was witnessed by over half a million visitors who attended the 104th year of the event.

Some wondered whether the half-ton of butter used for the butter sculpture would all go to waste, something farmers never do because they are conservationists to the core. It was disassembled by 4-H volunteers, sent to a methane digester on a local farm and converted to renewable energy.

There was something there for everyone to do, with over 300 commercial exhibits; 12,000 competitive events, half of which included animals; rodeos; and square-dancing.

There was also something for everyone to eat, whether a visitor was vegan or gluten-free, or wanted all the beef or dairy or wheat available. For example, 12.5 tons of potatoes were consumed, either in doughnuts or French fries; nineteen thousand gallons of ice cream were consumed in milkshakes and ice cream cones; and 7,000 pounds of cheese were consumed in fried mozzarella squares. Pennsylvania is also the largest grower and supplier of mushrooms in the country, and they were served in abundance, sauteed with onions on a gluten-free bun.

There was also something for everyone to learn, said PennAg Industries Association Executive Director Christian Herr. He did his best to do so, for the legislative community and for consumers who often forget that the tomatoes they buy at the local grocer come from somewhere more profound than a stockroom.

“Agriculture’s political influence has vanished among elected officials, so we need to remind both them and attendees of our impact in their lives and in our economy,” said Herr.

The sense of community here is strong.

But, as Herr pointed out, the influence of farmers is often missing, despite agriculture’s effect on the economy being eye-popping. Data compiled by Gov. Tom Wolf’s administration reports that in this state alone, “The agricultural industry generates approximately $135.7 billion in total economic impact each year and supports 579,000 jobs with $26.9 billion in earnings. For each job directly supported by Pennsylvania agriculture, another 1.06 jobs are indirectly supported across the Commonwealth.”

Many of the young people working at the food stands, such as the iconic Pennsylvania Dairymen’s Association milkshake booth, were volunteers, explained Dave Smith, executive director of the association.

“This is our biggest fundraiser of the year,” he said. “We use the proceeds after expenses to give back into the Pennsylvania agriculture and dairy industry in the form of next-generation development. We do scholarships. We do internships. We give money away to organizations that have programs with legs.”

Whether talking to a young farmer, such as Margo Sechler from Bell & Evans, whose Fredericksburg family farm supplies organic chickens to Whole Foods; or to Beatrice and Wilber Gyger of Hummelstown, ages 89 and 95, respectively, who discussed the secret to the longevity of their marriage; or to 20-year-old Tesean Richardson in his colorful red, white and blue overalls, who was there for the “good energy” of the event, everyone understood either before they arrived or after they left that they are all somehow connected to their state’s agriculture life.