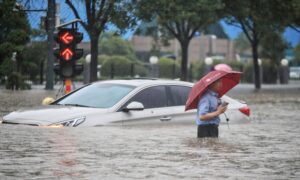 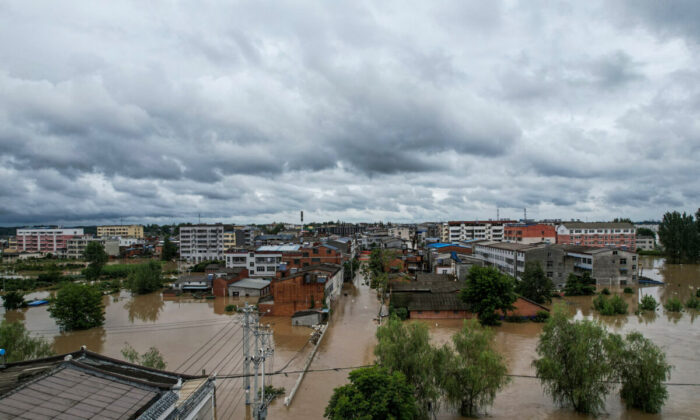 Flooding continued to cause havoc in both cities and rural areas in central China early on Aug. 12, killing people as they slept.

The torrential rain left more than 2,700 houses and shops damaged, with 221 collapsing entirely, according to China’s central broadcaster CGTV. Authorities said 21 people had been killed, with four missing.

That number may not reflect the true total, given that the communist regime is known to underreport the casualties of floods, one analyst told The Epoch Times.

A resident who gave his surname as Li said, “There’s a lot more [people killed].” He told The Epoch Times that more victims hadn’t been found.

“The true death toll is still unknown,” one civil rescuer told The Epoch Times. “The flood rose too quickly, reaching over three meters. We are cleaning thick mud now.”

At 10 p.m. Wednesday, the local meteorological agency issued the most severe “red alert” in Liulin, citing terrestrial rain in the region.

Five hours later, a flood swept through the town when residents were asleep. The first floors of all buildings alongside a road in the town center were submerged soon after.

“Just half an hour before the flooding, the authorities started to use police cars’ loudspeakers to warn everyone,” a shop owner who gave his surname as Zhu said. He complained the warning had come too late.

Zhu told The Epoch Times many residents heard police sirens on Thursday morning, but they didn’t understand what it meant.

He added the police sirens may have failed to wake some people up due to the loudness of the downpour. Zhu suggested if more officials could call residents through loudspeakers or by knocking on doors, many more would have escaped the flood.

“Nothing left in my shop now, all gone [with the flood]. Every household suffered. I don’t know whether I could receive compensation,” he said. Zhu is currently sheltering at a school.

China regularly suffers seasonal flooding, but this year has been particularly severe, with torrential rains reaching from the center of the country as far north as Beijing.

The official death toll was questioned as the authorities dispatched the army and police guarded the worst-hit area, a 2.5-mile-long tunnel that was inundated with water in just five minutes.

Foreign journalists who reported a drowned underground train were hunted and harassed by Chinese Communist Party, and a state-media photographer was detained. The regime also barred people from mourning those who had been drowned at the entrance of a subway station.

More heavy rain is forecast across east and south China, including Guangxi Province and Yunnan Province, the National Meteorological Center said on Aug. 14.

The Associated Press and Hong Ning contributed to this report.