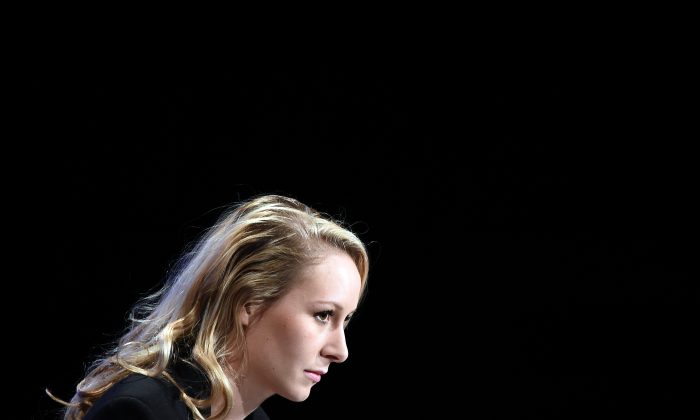 PARIS—She’s the youngest French lawmaker and in an election this weekend could become the youngest president of a powerful region.

The stakes in Sunday’s vote for leadership councils in 13 French regions are high. If the two Le Pens win their regions, the anti-immigration National Front will shatter France’s current political landscape—and Marine Le Pen will boost her chances in France’s 2017 presidential campaign.

Both women performed so well in the Dec. 6 first-round vote that the beleaguered governing Socialists pulled out their candidates and ordered supporters to cast ballots for the rival conservatives.

It was a deft move—and now nothing is assured. Two polls released Wednesday showed both Le Pens losing their races, meaning they have just days to redouble their efforts.

Prime Minister Manuel Valls, a Socialist campaigning for weeks against the National Front, played the ultimate fear card Friday, saying on France-Inter radio that “the extreme right advocates division … that could lead to civil war.”

In the meantime, the golden girl with long blonde locks running in southern France appears undaunted by the task.

With a soft voice and poised demeanor, Marechal-Le Pen lambasts the nation’s top politicians, once taking the floor in parliament to castigate the prime minister’s “brainless contempt” of her party. She derides France’s policy on migrants and tells Muslims they must conform to France’s Christian tradition if they want to be citizens.

She is “a woman of velvet with a character of steel,” Stephane Ravier, a National Front senator, said as he introduced Marechal-Le Pen at a campaign rally Wednesday in Marseille.

Despite their family ties and far-right bent, much separates the two Le Pen women, from political messages to personality to style. Some of the differences may reflect the regions they are contesting, both with significant Muslim populations.

Marine Le Pen, 47, has worked to scrub away the stigma from a party that for decades has been a political pariah. She owns the stage when she delivers her message of change to the northern lands where she is running, the poorest region of France and a bastion of the governing Socialist Party.

The almost prim Marechal-Le Pen, a conservative Catholic, is running for the presidency of the Provence-Alpes-Cote d’Azur region of southern France, a stronghold of former President Nicolas Sarkozy’s conservative right. Despite her Parisian upbringing, she connects with a region of small businesses and farmers deeply attached to tradition and the land, from France’s southern Alps to its vineyards and fields of lavender.

The younger Le Pen appeals to both Catholic traditionalists and to the radical identity movement thriving in the south that is trying to keep France French. Dishing out that message, she has vowed that as head of her southern region, she would cut funds to planned parenthood groups and associations representing Muslims.

“We are not a land of Islam,” she said at a rally in Toulon. Muslims can be French citizens “only on condition that they bend to the customs and the way of life that Greek, Roman and 16 centuries of Christianity fashioned.”

She walked that stance back a bit this week on iTele TV, stressing that all immigrants are expected to exchange their customs for the French way of life.

The French model “has been abandoned in favor of the multicultural ideal, a kind of right to be different that I profoundly believe contributes to the French fracture,” she said.

Marechal-Le Pen gets extra love from some National Front supporters because she quietly nurtures the themes of party co-founder Jean-Marie Le Pen, her grandfather, who holds a seat in the southern regional council. He has been ostracized by daughter Marine in a family feud that at one point risked fracturing the party.

Marechal-Le Pen makes it clear she opposes her grandfather’s anti-Semitic remarks, which triggered the feud, but embraces his overall message, including the fear that Islam will overtake French civilization.

“She has proved she can convince … She has the capacity to deliver,” Marc Lecointe, a 40-year-old finance professional, said at a Paris rally Thursday that brought together all 13 National Front candidates. The crowd whooped when Marechal-Le Pen took the stage—and spontaneously erupted in a “Happy Birthday” song for her.

“She has something hereditary, a political sense,” Lecointe said.

“That helps,” he admitted.