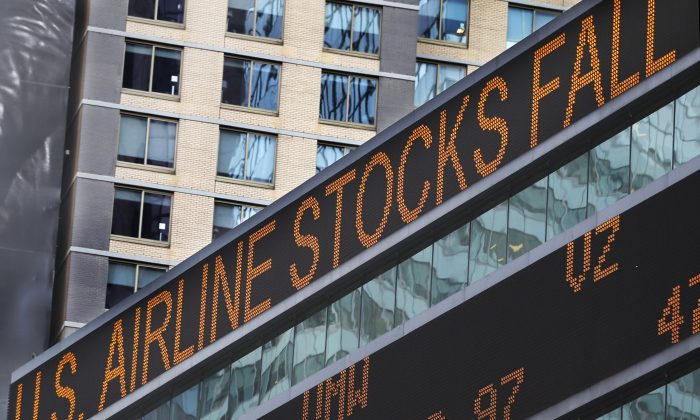 A financial news zipper on the front of Morgan Stanley's world headquarters shows news of US airline stocks falling on news of fears of traveling due to Ebola, Wednesday, Oct. 15, 2014, in New York. (AP Photo/Kathy Willens)
Business & Economy

DALLAS—News that a health worker diagnosed with Ebola flew on a commercial flight raised fear among airline investors that the scare over the virus could cause travelers to avoid flying.

A top federal health official said Wednesday that the health care worker should not have flown on a commercial plane.

Shares of the biggest U.S. airlines tumbled between 2 percent and 4 percent in afternoon trading. The overall market slumped on concerns about slowing global economic growth.

Frontier Airlines announced that public-health officials were notifying the 132 passengers on Monday night’s Flight 1143 from Cleveland to Dallas-Fort Worth. The airline’s crew reports that the woman showed no symptoms during the flight.

Robert Mann, an aviation consultant and former American Airlines executive, said that if the second worker showed no symptoms on her Frontier flight, the decision to notify other passengers was made out of extra caution. “But all that rational thought aside, it may cause some people to delay trips,” he said.

Dr. Thomas Frieden, the director of the U.S. Centers for Disease Control and Prevention, said it was extremely unlikely that passengers could contract the disease because the health care worker was not vomiting or bleeding. But, he said, she should not have been on the flight.

Anyone who was possibly exposed to Ebola should have traveled only by “controlled” and not public transport, Frieden said. Also, he said, the woman didn’t report that she took her temperature and found it to be slightly high — 99.5 degrees.

“By both of those criteria, she should not have been on that plane,” Frieden said on a call with reporters.

Frontier said it was notified by CDC early Wednesday morning about the health care worker on Flight 1143. The airline said that was the plane’s last flight on Monday night, and it was cleaned overnight according to CDC standards before being used Tuesday.

The same health care worker flew from Dallas to Cleveland on Oct. 10 on Frontier Flight 1142.

Since the first case of Ebola diagnosed in the U.S. last month, attention has focused mostly on travelers from West Africa, the center of the epidemic. The first victim was a Liberian man who flew into Dallas-Fort Worth International Airport on a United Airlines flight from Washington’s Dulles Airport. That case led U.S. officials to expand health screening of passengers from West Africa who arrive at five major airports.

The latest health worker flew on a domestic flight from an airport where there is no screening for fever.

Dallas-Fort Worth International Airport says it handles about 165,000 passengers per day or 60 million in a year. Airlines there operate both international and domestic flights.

Airline stocks have slumped in recent weeks on Ebola fears and concern about slower growth in the global economy, which could offset the benefit to airlines from falling fuel prices.

Wednesday, airlines with the biggest international networks sold off the most.