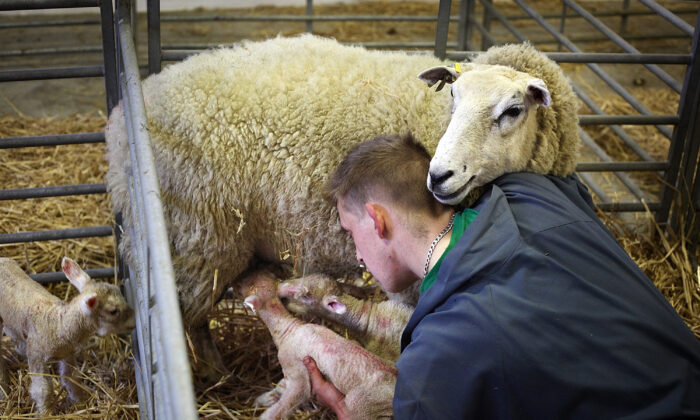 It’s official: Farming is an ageing occupation—with voices in the industry saying Britain “desperately” needs more youngsters to choose it as a career, raising questions about who will produce the nation’s food in the future, and how.

Experts say that despite the appeal of new working practices to the younger generation, around 40 percent of farmers are 65 or older in the UK, with 59 the average age.

The challenges for any new farmer in Britain are significant.

“You need to have a lot of money in land and equipment,” Professor Lee-Ann Sutherland of the James Hutton Institute told The Epoch Times. “And there are two obvious ways to get it—you inherit it or are independently wealthy.”

Yet to some extent, the picture is more mixed than it would appear.

“Farms tend to be run by families,” Sutherland explains, “not always but quite often and there’s a strong patriarchy in farming. It tends to be the oldest male who is identified as ‘the farmer.’ If you were to take an average age of everyone working on the farm you’d get a lower number.”

This can include the ‘”successor,” often identified when young by the family, more often male, and probably already working on the farm.

But for those on the outside looking in or trying to gain a toehold, the price of land is punitive.

“My concern is that this land is already consolidated among a number of people who own it already,” says Sutherland.

Mark Thomas of the Farming Community Network agrees most “decision-makers” on farms are over 50 but believes there are increasing opportunities for newcomers because the size and type of farm can vary dramatically.

“You would have the big farming estates in the eastern counties and the much smaller hill-farming type business in Wales and northern England—and everything in between.

“That’s where there is the real possibility of entrepreneurial thinking coming in from a younger generation.”

He thinks their skills will complement those of older and more experienced farmers.

Thomas is excited by the new technology—like drones which can be used to survey crops over a wide area or just check guttering on a roof.

Glasshouses and vertical farming, growing crops from leafy greens to strawberries, even in cities, are now catering to niche markets like the organic sector.

“Engineering technology, the use of AI and robots, for instance in robotic dairies.

“They still need to be monitored and managed but it’s a slightly different role to the more traditional,” Thomas told The Epoch Times.

One company, Growing Underground, produces salad in Clapham, south-west London—or more precisely, in a subterranean urban farm 33-metres below it—in tunnels that were once part of the old tube or subway system.

The underground farm uses a hydroponic system complimented by the likes of top chefs such as Michel Roux Jr., and is a hit with Dr. Gillian Rose, an associate professor in the school of agriculture at Reading University in southern England.

With such innovation, Rose says “we desperately need more graduates not only in biology but in engineering, IT, marketing and the business sector, for farms that are looking to diversify.”

“We’ve very much seen a switch in the last 10 or 15 years where as many as half the students who come to us don’t have any farming experience.”

One newbie to embrace the challenge is 27-year-old Karl Franklin.

A former chef who now sells meat boxes of the lamb he rears in west Oxfordshire, central England, Franklin owns what he calls a “flying flock.”

“I beg, borrow or gain as much grazing as I can,” he told The Epoch Times.

Most of his ewes are in a 60-acre block but he is currently grazing five sheep in someone’s garden and will take anything from half an acre to 100 acres.

Franklin says he will travel anywhere within reason, engaging in a kind of bartering system of goods and labour in return for the right to graze his sheep.

“All of my land I swap for something else, whether that’s work I do for them or I swap it for hay.

The resourceful entrepreneur, known as “the pretend farmer” on Instagram—though he’s anything but—also runs a gardening business. That’s where the hay comes in. His two enterprises work together.

Franklin typically spends two days a week with his 90-head flock and three weeks lambing in spring, an experience he describes as intense, draining but exhilarating.

The young farmer is emphatic he has received nothing but support and encouragement from older hands including some of the biggest names in the area.

“One is a very good friend now. He’ll put up with me phoning him whenever to ask him questions. He’ll spend the time ringing me back and talk me through stuff. He passes on any spare grazing. I couldn’t have been welcomed more.

“It’s a fantastic industry and I would genuinely encourage anybody to get into it.”

The push toward more locally produced and homegrown food in the UK could also encourage youngsters to think of a future in farming, thinks Rose, because it personalises farming.

“I love that you can walk into a supermarket and see a farmer’s name on the produce.

“You can get pictures of the farmer and their cows on the milk cartons and find out more about them.”

It all makes agriculture more visible to the younger generation, something she feels is lacking from school curricula.

Farming is a long game. Nine or twelve months pass before you can get a return on a crop, two or three years for livestock, ten to fifteen before orchards or Christmas tree farms are ready for harvest.

Rose is certain open spaces and the countryside are more valued since the pandemic, with some mid-career professionals considering a change of tack and a move into farming.

Sutherland sounds a note of caution, citing research from her native Canada.

“We found a lot of these newcomers come in, they try for five years, then they’re gone again.”

But she agrees that in “our post-COVIDenvironment, people realise the value of working outside on the land, with animals. Farming has a lot of appeal,” she says.

“I don’t think there is any shortage of people who want to come into farming. It’s making it work financially and getting access to the land that’s the problem.”